Lemieux on Canelo: If I Get Green Light, I'll Be Very Ready To Go

Former middleweight champion David Lemieux has been snake bitten by injuries and issues making weight over the last handful of years.

Due to the mandated break caused by Covid-19, the Canadian-based Armenian fighter has had some time to recover his 31-year-old body before he gets back into the ring.

“Covid-19 has given me time to recuperate from my injuries. I used the time to heal from injuries and prepare properly. I would have definitely preferred to be fighting and be in action, but once the light is green, I am going to be very ready to go,” Lemieux told BoxingScene.com in an interview.

“Inactivity didn’t play in my favor. I wanted to work on that this year, and then came the pandemic. I want to be active. Once all of this is over, hopefully, I will have two fights by the end of the year.” 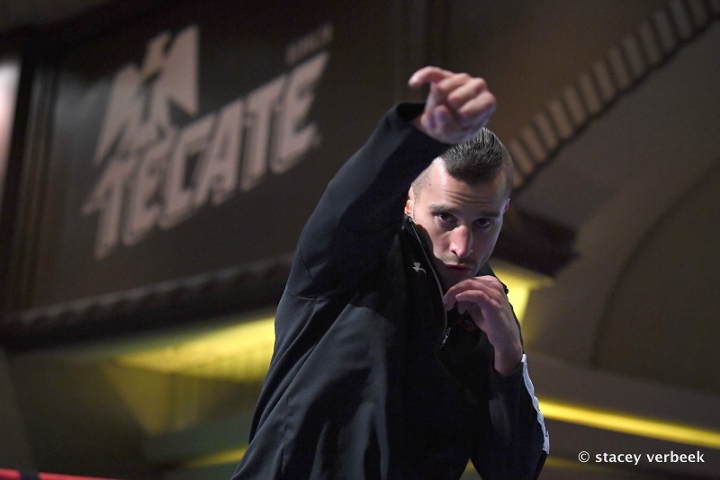 Lemieux (41-4, 34 KOs) could have a huge fight on his hands. He is on the shortlist to perhaps next fight Canelo Alvarez in September. Negotiations are currently ongoing, the fighter said.

No matter how tall the task Alvarez might be, the super middleweight Lemieux believes he will be ready.

“I’ve shown many abilities outside of power punching in many different fights. I’m not a one-punch knockout artist. If I need to box, I can box too,” said Lemieux.

“If we were to fight Canelo next, we would do everything I need to prepare. I’ve been in the game a long time, and I can build a camp to be in super shape for a fight against Canelo. I’m looking forward to a fight and victory against Canelo ... Styles make fights, Canelo would be a great matchup for me, and fireworks for the fans. I’ll be prepared for any scenario — and not just ready, but ready to win.”

Lemieux has fought once since September 2018, and looked shaky doing so as he was dropped twice before rallying to secure a split decision win over Maksym Bursak.

“I’ve been hit harder by a lot stronger guys than Maksym Bursak,” said Lemieux. “I can’t tell exactly what it was, but I wasn’t in my top abilities during that fight. I got knocked down from punches I shouldn’t have gotten knocked down from.

“I’m using this break during Covid-19 to benefit me and to make sure scenes like that don’t happen again. It was a tough fight, and the inactivity was my biggest issue in that fight. We’re doing everything we can right now in training to get back in top, solid and strong shape. I’m going to come back stronger once the next fight is scheduled.

Lemieux is riding a three-fight winning streak since dropping a decision to Billy Joe Saunders in 2017. Before the Saunders fight, Lemieux scored KO wins over the likes of Glen Tapia, Curtis Stevens and Spike O'Sullivan.

Lemieux rebounded from back to back losses as an undefeated prospect in 2011 to Marco Antonio Rubio and Joachim Alcine to string wins against Gabriel Rosado and Hassan N'Dam, the latter of which was for the IBF middleweight crown.

He lost his middleweight title in his first defense in 2015 in a TKO defeat to Gennadiy Golovkin.

[QUOTE=Plick647;20658818]i figure, if anyone can land a home-run ball on Canelo, its either GGG or Lemieux. how good that shot will be, tho, remains to be seen! id be rooting for him![/QUOTE] Kovalev hits pretty hard also, how'd that work…

And get knocked out for that Canelo money lol

Snake bitten by injuries, is that a thing?

Lemieux is absolute dog sheet but i have to say he is one of the P4P hardest punchers in boxing. His movement is terrible but he still has the power to hurt Canelo. If Canelo were not to respect his…

it'd be a fun fight while it lasts the outcome can't be other than Lemieux getting stopped, though Canelo is on whole other level skill-wise and also has a great chin so even if by some miracle Lemieux lands a…