Is KSI vs. Logan Paul Rematch Good For Boxing?

It’s easy not to like the KSI v Logan Paul “fight”. It’s easy to snarl at the rank commerciality of it, what on the surface feels like a naked money grab at the expense of the sport’s integrity. But will boxing get any benefit from the clash of the YouTubers, or is the sport just the butt of their big joke?

It’s fair to say this fight has split opinion. Does this open the sport to a new potential audience, or is giving these two top-billing over world champions merely insulting?

Don’t be ashamed to say you have never heard of KSI or Logan Paul. The first time I had heard of KSI it was on the night of his fight with Joe Weller. I was on the Tube on my way to the O2 Arena to see Lawrence Okolie face Isaac Chamberlain and overheard a conversation about a fight that night at the Copper Box, which had apparently sold out the arena (unlike Okolie-Chamberlain).

I had heard of Paul, largely because of the controversy over his “video of a corpse in a Japanese suicide forest”. I was also aware of Youtubers in general like PewDiePie, largely after they were spoofed on South Park.

However, nothing, just nothing, will make me watch one of their videos. I just don’t care enough and I am not their target audience. They are not the only things I choose to completely ignore – talent shows, reality TV, soap operas, when they come on TV, I turn off. Life is just too short. My son watches YouTubers, endless hours, if I let him, of other people playing video games. He is 9.

But much like soap operas, reality TV and talent shows, some YouTubers are staggeringly popular.  Eddie Hearn saw the instant fit with DAZN, which, after all, isn’t a TV company but a streaming service. Get their fans to sign up and you could have them forever, or so the logic goes.

“Look at the views,” has been a constant feature in the past few weeks, leading to some, who should be old enough to know better, to sense an opportunity to dunk all credibility in the shredder once again.

And they did view, in their ker-zillions, especially the launch press conference, where Hearn looked like a supply teacher who had lost control of the classroom and Paul took the mic and got the crowd to chant “JJ has no dick”. 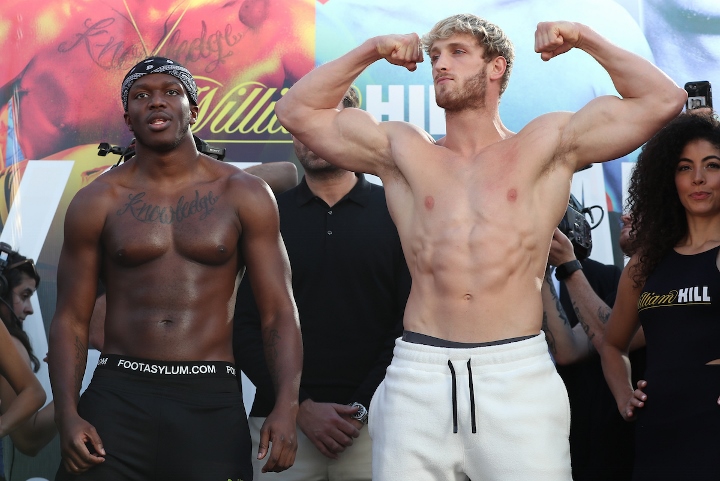 “Popularity is no guarantee of quality,” as someone famous, and no doubt popular, once said.

KSI and Logan Paul are not the first people to use boxing as a vehicle for their entertainment – Charlie Chaplin did it and I doubt Ted “Kid” Lewis, or whoever was world champion at the time, was digging him out for taking the piss. And that, at the heart if it, is what this is about to them, providing content, entertaining their fans.

Whether those fans stick with boxing is another matter. At the time of his notorious Japan video, Paul’s target audience was described as 8-14. While that may have grown up with him a bit since – and boxing is no doubt part of a plan to target an older crowd - that is hardly a big-spending demographic, let alone one that is likely to stay up until the early hours to pay to watch in the UK.

You don’t have to watch, you don’t have to care, but in an era where boxing is no longer on terrestrial/network television and ignored in certain countries by the mainstream media, this may be for many their first experience of the sport. And while that may not make them instant fans, it will at least make some people aware of boxing. It never hurts, after all, to be relevant.

Not at all. The new eyes on the sport narrative is false. Haney and saunders didnt gain new fans last night, the youtubers were going mad online about ksi and logan paul selling out. They didnt want to see any…

Contests like this and silly cards like Amir Khan 'fighting' for millions of £s against a finished guy three weight divisons down simply can't be good for the sport.Boxing is a serious sport and dangerous to boot every effort must…

This entire format is getting awkward. I'm not sure that this is a smart move by DAZN. Mexicans will not take to this ****ery. This entire thing is starting to feel cheesy.

I think it's fine to have an event like this and get some younger people watching and enjoying boxing. Plenty of us have seen some downright AWFUL cards that were dubbed professional - cards full of robberies and boring/farcical action…

this whole event is ass juice. the sport of boxing is being mocked.