Eleider Alvarez is headed toward a light heavyweight title fight against Adonis Stevenson’s rival, not Stevenson.

Unable to come to a step-aside agreement with promoter Yvon Michel, BoxingScene.com has learned that Alvarez signed a contract Wednesday to challenge Sergey Kovalev for the WBO 175-pound championship sometime this summer. The Kovalev-Alvarez fight will be broadcast by HBO, but the date and venue haven’t been finalized.

Representatives for Kovalev and light heavyweight contender Marcus Browne were close to finalizing an agreement for Browne to face Kovalev (32-2-1, 28 KOs) sometime in July in The Theater at Madison Square Garden. Once it was revealed earlier this month, though, that Browne was arrested twice – once in December and once in March – for domestic incidents involving the mother of his daughter, with whom Browne has a custody agreement, Kovalev’s handlers began seeking other options. 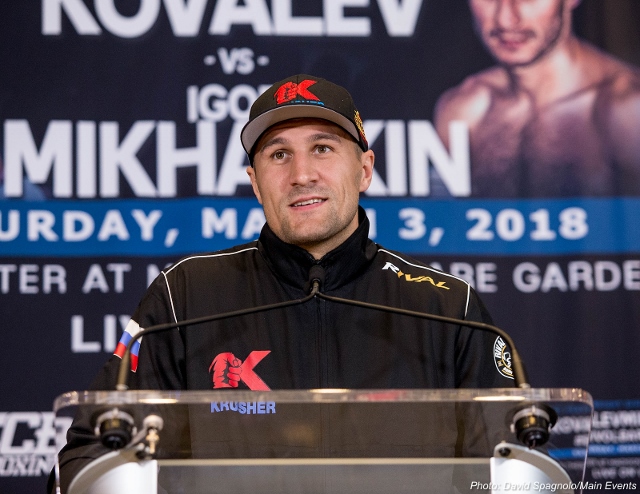 Alvarez, meanwhile, was an obstacle blocking the official announcement of Stevenson’s WBC light heavyweight title defense against Badou Jack. The Colombian-born, Quebec based Alvarez (23-0, 11 KOs) has been the mandatory challenger for Stevenson’s title since defeating South Africa’s Isaac Chilemba in November 2015, yet he has fought four times since then.

Alvarez’s manager, Stephane Lepine, tried to arrange a step-aside agreement that would’ve enabled Alvarez to appear on the Stevenson-Jack undercard and face the winner in his following fight. Once it became clear they were too far apart on financial terms, Michel began working with Main Events CEO Kathy Duva, Kovalev’s promoter, on a Kovalev-Alvarez fight.

An official announcement of the Kovalev-Alvarez card, which also could include a title defense by WBA light heavyweight champ Dmitry Bivol (13-0, 11 KOs), could come later this week.

The Stevenson-Jack fight, tentatively scheduled for May 19 at Bell Centre in Montreal, is expected to be officially announced either Wednesday or Thursday. Showtime will televise the bout between Quebec’s Stevenson (29-1, 24 KOs) and Sweden’s Jack (22-1-2, 13 KOs) as the main event of a split-site doubleheader.

lol Maybe it will be Browne-Beterbiev!

[QUOTE=daggum;18683332]dumb move by alvarez. he had years of step aside money left to make[/QUOTE] The step aside deal for letting the Stevenson/Jack happen is still there for him... That's the last one doe... Happy for Alvarez but he had no…

so no one cares that kovlaev is ducking browne??? where are the rights for women beaters? they don't get to make a living now? where is the tolerance?

Stevenson that POS (Piece of s***) is being made to look a complete fool again! Kovalev will happily fight the man Chickenson has been RUNNING from for 2 years. I hope Jack knocks out POS and Kovalev and Alvarez have…

[QUOTE=TheCell8;18682498]Not better than Browne but he's decent.[/QUOTE] Actually, he might be better than Browne, head to head. But I will agree with you, Browne is the tougher fight, stylistically, for Kovalev, and a big reason for that is that Browne…