At 33 years of age and having fought a number of top-class opponents in his career, Spain’s Kiko Martínez once again challenges the best in his division when he takes on Gary Russell Jr for the World Boxing Council [WBC] featherweight championship on May 18 in New York City.

Russell, who last fought in May 2018, has been relatively inactive over the last few years, something that Kiko believes could play into his hands come fight night.

“I think he has had an injury but it’s true he has only fought once a year lately,” the Spaniard told BoxingScene.com.

“I knew about this fight a long time ago and so I’ve had great preparation for it, I’ve had time.  If he hasn’t been active and if he’s not prepared, then he’ll pay for it because I’m coming into this fight very strong and I’ve had no physical problems during camp.” 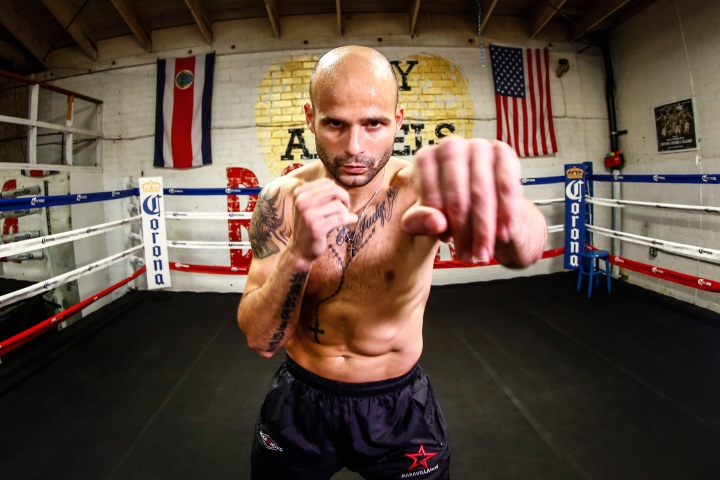 In his last major contest, which was against Josh Warrington in 2017, Martínez pushed the now International Boxing Federation [IBF] featherweight champion all the way in a bout that saw the Englishman emerge with a majority decision.  The Alicante native has since been hugely impressed by the progress of Yorkshire’s Warrington, predicting an even brighter future.

“Warrington has showed that he is a truly great champion after fighting me,” said Kiko.

“He beat [Lee] Selby and [Carl] Frampton, but my fight with him was pretty close.  Maybe I didn’t feel like I was the winner, but I also felt I didn’t lose, it was that close.  I’m here to show against Russell that I’ll be around for a while and can be a world champion again.”

‘La Sensación’ is of the opinion that given Warrington’s recent form, the victory trend is likely to continue when he makes the second defence of his title against Kid Galahad on June 15 in Leeds.

“He really surprised me with the win against Frampton.  With Selby not so much, I thought he’d beat Selby.  I’ve sparred Selby and I’ve fought Warrington and I told people that he would win because for me, he’s more courageous and he’s more of a fighter and I knew that would help him win.  Frampton on the other hand I thought would win and I was wrong, Warrington had a great strategy against him, he really surprised me.

“Galahad trains in the Canary Islands sometimes and also comes to Benidorm which is near me,” he continued.

“This is boxing, and Kid Galahad is also a great boxer, he’s very difficult to fight against and he has a good all-round game, but I’m thinking that Warrington will win again because he’s at a very high level right now, he’s in the form of his life.

“He’s even better now having fought Selby and Frampton than he was before.  If Galahad comes to fight toe-to-toe, then Warrington may even win by knockout.”

The hate for the gifted is real

Love Kiko but he is an old, blown-up bantamweight. Stupid to call this a title defense when the "champion" is only fighting once a year

[QUOTE=jonnyc420;19726554] Fighting Martinez is just sad for his annual appearance.[/QUOTE] But if he didn't have this tune-up, he wouldn't be in shape for next year's tune-up.

[QUOTE=Oldskoolg;19726522]Does Russell have income outside of boxing? He fights like once a year and then expects big fights like that[/QUOTE] Its that Al Haymon money

[QUOTE=CTC JOHNNY;19726542]Gary Russell Jr is Damn if he do and Damn if he don't.... Smh .... the hate for the gifted is real...[/QUOTE] Gary The Ground Hog Russell is criticized rightfully. His career is built on bums. Biggest name he…