Khussein Baysangurov Gets Off The Floor To Stop Torosyan

It wasn’t, however, a walk in the park for the Chechen fighter, who has mostly fought out of Kiev, Ukraine. Torosyan, known for his upset kayos of Danish fighters Reda Zam Zam, Torben Keller and Abdul Khattab, was first to strike with a thunder, as his left uppercut made Baysangurov’s knees buckle, and he went down at the end of the first minute of the fight.

Quickly up, Baysangurov went right at Torosyan and ate more uppercuts but soon also found his soft spot in the native Armenian’s defense. Baysangurov's punches were as numerous as they were punishing. Finally, pummeled around the ring, Torosyan took a knee in his corner. Up at six he continued fighting, but it was a one-way street after that knockdown. 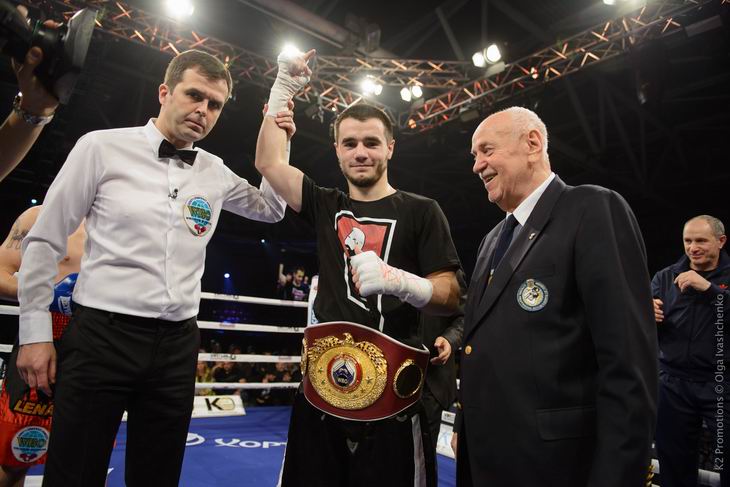 Baysangurov continued the massacre in the second round, while Torosyan just couldn’t get a break. Soon another combo by the Chechen made Torosyan take another knee, and he was counted out with a mask of pain in his face and possibly a damaged spleen.

Baysangurov improves his record to 16-1, 14 KOs, while Torosyan lost his fourth straight and is now 19-8-1, 16 KOs. Zyaki Yunisov of Yuka Promotions staged this event.

Nazran native Albert Khamkhoev (3-0) looked just a notch better than his extremely more experienced Ukrainian veteran opponent Victor Plotnikov en route to a close unanimous decision over six rounds. Khamkhoev was sharper, and his reflexes were better than those of a 42-year old Ukrainian fighter. Plotnikov has never been in danger of losing inside the distance, but his defeat was convincing. Plotnikov lost his fifth in a row and drops down to 33-8, 15 KOs.

Middleweights Zurab Kvitsiani (7-1, 2 KOs) and Vladislav Tantsuira (2-5, 1 KO) engaged in an eight-round two-way action, and Kvitsiani was forced to work very hard to get his next W. Tantsiura was a late sub for fellow Ukrainian Artem Karpets, who was no show tonight. Tantsiura started very fast, while Kvitsiani didn’t look that good. The Russian fighter evened things up to the mid-point, and it was a see-saw bout after that. BoxingScene had it 76-76 – on its own card. Meanwhile, official scores weren’t announced.

Rising Ukrainian super middleweight Ramil Gadzhiev is 10-1-1, 6 KOs after making it quick and painful for career journeyman Artem Karasev, originally from Krasnoyarsk, Russia, but now representing Lithuania. It took Gadzhiev 65 seconds to put Karasev down and out with a huge liver shot. Karasev drops down to 13-38-3, 9 KOs.