Thurman has been inactive since March of 2017, when he won a twelve round split decision over Danny Garcia to unify the WBA, WBC world titles.

After the win over Garcia, Thurman underwent surgery for an elbow injury and remained on the shelf for the rest of the year. He was scheduled to fight against on May 19th, but he then withdrew from the contest after suffering a hand injury in camp. No opponent had been set for his return. 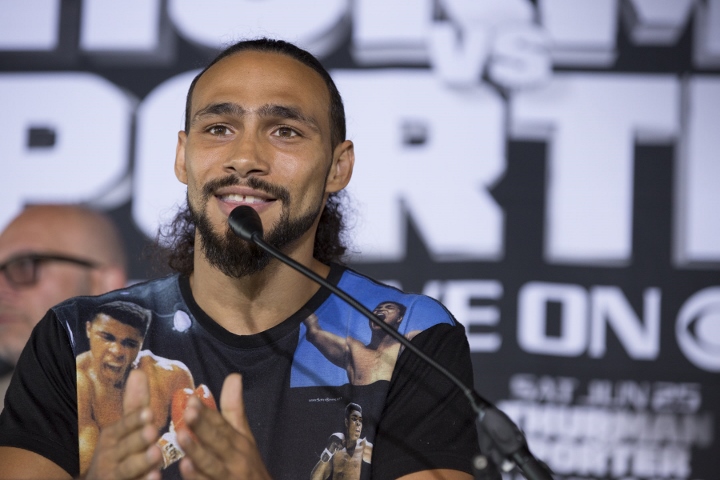 As a result of Thurman's decision, the WBC has ordered Shawn Porter and Danny Garcia to fight for the vacant belt. Thurman, who still holds the WBA's super title, will have the option to get an immediate crack at the winner when he returns.

Porter (28-2-1, 17 KOs), who lost a close decision to Thurman in 2016, became the mandatory challenger when he won a final eliminator last year with a knockout of Andre Berto. He came back in November to with a twelve round decision over Adrian Granados.

Porter is a former IBF world champion, and lost that title by way of a close twelve round decision to Kell Brook in 2014.

Garcia (34-1, 20 KOs) returned to the ring back in February, in his first bout since lost to Thurman, and scored a brutal knockout of Brandon Rios in what the WBC sanctioned as a secondary final eliminator - which made Garcia the second mandatory challenger in line.

After Garcia's victory, there was an in-ring confrontation with Porter - as the two boxers traded words during a live Showtime broadcast.

Besides his title run at welterweight, Garcia also held the WBC, WBA world titles at 140-pounds - and vacated both belts when he moved up in weight to pursue bigger fights.

[QUOTE=greeneye99;18703837]Thurman beat Porter/Grcia alreay Vargas wasn't even a threat to Broner You think Champion scared of Vargas? Lol[/QUOTE] I said he was offered the fight and didn't want it. This is well known.

[QUOTE=Sledgeweather17;18703139]It's pathetic how you're tryna spin Thurman's choice into something positive. This aint about holding the division hostage, Thurman doesn't care about that, if he did he would have dropped both belts. He dropped the wbc because he didn't want…

[QUOTE=tomatocantender;18703048]A neutered dog at that. Thurman is reminding me of 10 yrs ago when Arum & Pavlik tried holding mw belts hostage. BHop ended that farce at a 170 catchweight thank god, but this has the same fat & happy…

[QUOTE=AdonisCreed;18702982]FINALLY!!!!! I think that's good he gets a crack at it once he returns but Keith was holding that belt hostage for real! And now hopefully one of these guys will eventually fight Spence.[/QUOTE] Keith wasn't holding the belt hostage.…