Joshua vs. Povetkin Deal Close To Being Finalized, Says Hearn

Eddie Hearn expects Anthony Joshua’s proposed fight against Alexander Povetkin to be “finalised in the next 72 hours”, but has warned that an agreement for the superfight with Deontay Wilder could still be a month away.

The promoter has also revealed that Ireland’s Katie Taylor plans to fight on the undercard of the July 28 heavyweight fight between Dillian Whyte and Joseph Parker, despite her father being shot and admitted to hospital.

Russia’s Povetkin, the mandatory challenger to Joshua’s WBA heavyweight title, is preparing for a fight in the UK in September. 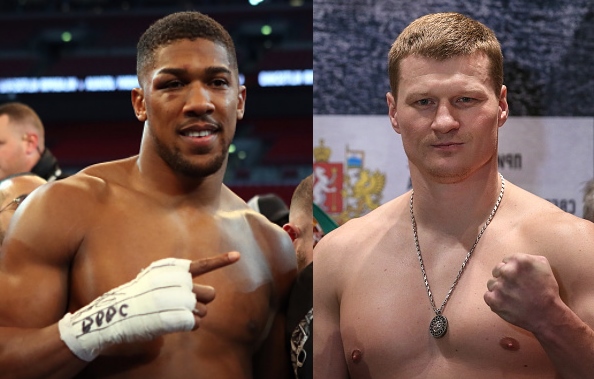 Should a date be secured it will come with an agreement for WBC champion Wilder to then come to Cardiff’s Millennium Stadium in February to fight for all four heavyweight titles in what would prove the most significant match-up in the world.

Hearn remains in discussions with both camps in an unusual attempt to agree both fights, and there remains the possibility of Wilder being the first of the two opponents.

But it is increasingly likely that Povetkin will come first and that Joshua will begin his training camp before their fight is officially announced, so that both can be confirmed at the same time.

“If he fights Wilder (first) it’ll be October, November in the UK, and if he fights Povetkin it’ll be in September. If it’s Povetkin next, the Wilder fight will definitely be signed before we go into that fight.

“Wilder understands he has to go where Joshua tells him to and at the moment Joshua’s telling him, ‘You have to come to the UK’. He knows, he’s up for that, but there’s a lot of things that have to be worked out.

“A deal will be done with Wilder in the next month, but we will probably move on a Povetkin fight before that. Wilder would be December at the earliest, probably February.”

An heavyweight boxer and belt holder who has only fought subalterns and cruiserweights is that one a boxer?

Hope it gets made. Make Wilder irrelevant. I'm sick of that B side.

[QUOTE=Muz;18843945]I guess the truth cant be spoken because it hurts sensitive people's feelings. The truth is the truth, no generalization of needing a black USA heavyweight to draw interest from a dying USA fan base[/QUOTE] You are a coward who…

Just can't get up for this....given what should be!

[QUOTE=Clubber Pac;18843572]Heads up, when you post a bigoted argument, any academic credibility you might have had is gone. Even if your right, even if the point your making is valid, the generalizations you just published about African Americans destroyed your…