NEW YORK – Anthony Joshua was his usual sculpted self as he stepped on the scale Friday afternoon at Madison Square Garden.

The 6-feet-6 Joshua, of Watford, England, weighed in at 247½ pounds for his fight Saturday night against Andy Ruiz Jr. The 6-feet-2 Ruiz was 268 pounds when he got on the NYSAC’s scale. 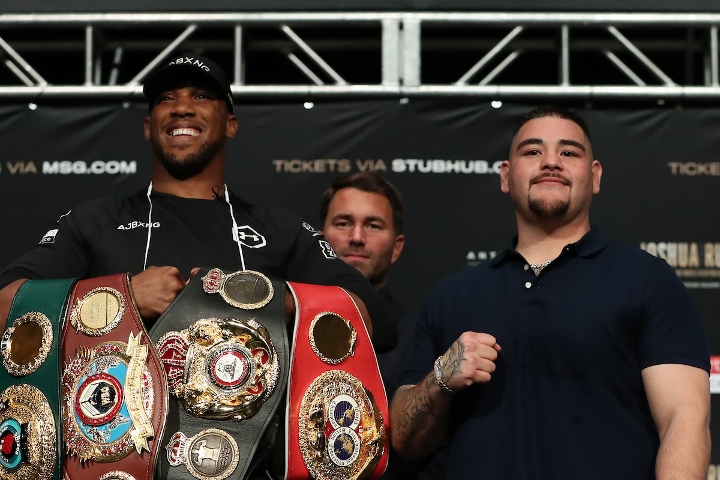 The 29-year-old Ruiz (32-1, 21 KOs) accepted the Joshua fight on only five full weeks’ notice. Joshua, also 29, was supposed to defend his IBF, IBO, WBA and WBO titles against brash Brooklyn contender Jarrell Miller (23-0-1, 20 KOs), but Miller tested positive for three performance-enhancing drugs and was removed from the fight.

Ruiz happily accepted his second heavyweight title shot once Luis Ortiz turned down what would’ve been a career-high $7 million purse to fight Joshua (22-0, 21 KOs), who’ll make his debut in the United States on Saturday night.

Below are weigh-in results Friday for several of the fights on the Joshua-Ruiz undercard:

Heavyweights like Ruiz have no respect for the sport looking the java the hut. I hope AJ sparks him out within 3.

[QUOTE=jreckoning;19787213]Yeah, maybe in a full camp he would have been around 250. He doesn't seem the type to drop weight very fast but he's been around 250 before and looked good there.[/QUOTE] That is what I mean, give himself the…

[QUOTE=PRINCEKOOL;19786675]Joshua has a dense but his frame is not very wide in comparison to Lennox Lewis or even Wladimir Kiltschko 'Kiltschko at a similar weight always had a slender athlete look to himself. Anthony Joshua is a very brolic individual…

Ruiz sucking in his belly like that girl he wants to bang is walking by. [IMG]https://photo.boxingscene.com/uploads/joshua-ruiz%20(3)_1.jpg[/IMG] Face off looking like one of those posed fan photo face offs lol. [IMG]https://images.performgroup.com/di/library/sporting_news/e2/e2/joshua-ruiz-053119-ftrjpg_1gltrwze3o6f81wgum1rqddj7h.jpg?t=250610195&w=500&quality=80[/IMG] Eh. I don't got a great feeling about this fight.…

[QUOTE=STREET CLEANER;19787206]He is a big heavy guy but no reason coming in so heavy so such a big fight. He has fast hands and gaining weight will slow him down carrying all that flubber around. I don't expect every fighter…