Joshua Rejects Talk of Retirement - Win or Lose Against Ruiz

Anthony Joshua has dismissed any suggestions that he will retire from boxing win or lose after his rematch with Andy Ruiz Jr on Saturday, insisting he has not yet reached the end of the 15-year “sentence” he gave himself when first taking up the sport.

Joshua, 30, will earn the biggest purse of his career, rumoured to be around $50 million, despite being the challenge when he takes on Ruiz in Diriyah, Saudi Arabia, on Saturday.

But Joshua said that he gave himself 15 years to dedicate himself to the sport when he first walked into a boxing gym in 2008 wearing an electronic tag.

Joshua was facing criminal charges, which would have likely seen him facing a prison sentence. But when he was acquitted, he decided to change his life.

“I live boxing, there’s nothing else,” Joshua said. “When I had that second chance at life when I was getting in trouble, I dedicated myself. I said I was going to put myself on a 15-year prison sentence to boxing. Focus. There’s commercial and you see the fun side, but it’s focus.”

And Joshua does not see four more years as necessarily the end.

“I could go a lot longer,” he said. “It’s a mindset, a military prison mindset. Training, focus, sleep. It’s a harsh way of explaining it, but you have to have the mindset.”

“I never had a chance to think about what I might achieve. I got into boxing and it was just rolled out in front of me through hard work.

“I know I can fight. I’ve come into the game and got through the process of practise. I just got in and done it.” 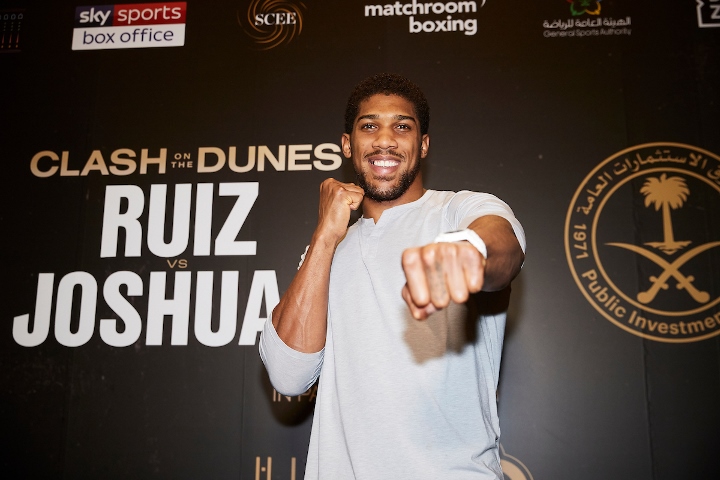 Despite suffering his first loss to Ruiz in June, Joshua insists that he is a better fighter now than the version of himself that beat Wladimir Klitschko in 2017.

“At the Klitschko I didn’t even know what was going on,” he said. “Walking out in front of 90,000 people, let’s get it on! I’m better prepared now.

“It was 2017. It’s been two years so I’m much more prepared as an athlete but Klitschko isn’t around anymore. So we took the fight and it paid off.

“You have someone like Lomachenko, who is great but then you have some fighters, like Canelo, who improves with every fight, and that is what I am.

“Look back at my career and you can see you almost never see the same fighting style in each fight. I can always change my style and am always developing. In the next fight you will probably see another version of AJ.”

He also denied that his defeat to Ruiz was a result of him living the high life.

“It is easy to say I had too many distractions, but we have been at high-level boxing for a long time,” he said.

“It isn’t easy, even when I walk out of the gym, I am not going back to sit around and have a laugh with the boys.

“If I go home at the weekends, people might assume I am out with the lads, but I still have to do my commercial work to build up the sport of boxing. It’s a lot of behind-closed-doors commitment and that is the type of pressure that comes with boxing.”

[QUOTE=Rockybigblower;20225744]I swear this guy just talks to hear the sound of his own voice. A bunch of sound bytes jammed together to build his confidence....but eventually bullshet walks.[/QUOTE] I like AJ but that is all true. Needs to start talking…

If Joshua loses, he should retire. he is young, ritch, handsome, Hollywood is waiting. He made enough money in boxing. If he loses, he will have to fight guys like Price, Hughie Fury for tune ups. Why?

alot of people go out of their way to dislike this guy. He's cool man ease up.

[QUOTE=BangEM;20225573]Even with all that, Wilder would still duck the fight. News coming out now is that Wilder is in negotiations to sign with DAZN, after his last fight bombed. He rejected $120m due to AJ being on the contract whilst…