More viewers were interested in Anthony Joshua’s fight against Joseph Parker than his previous appearance on Showtime. 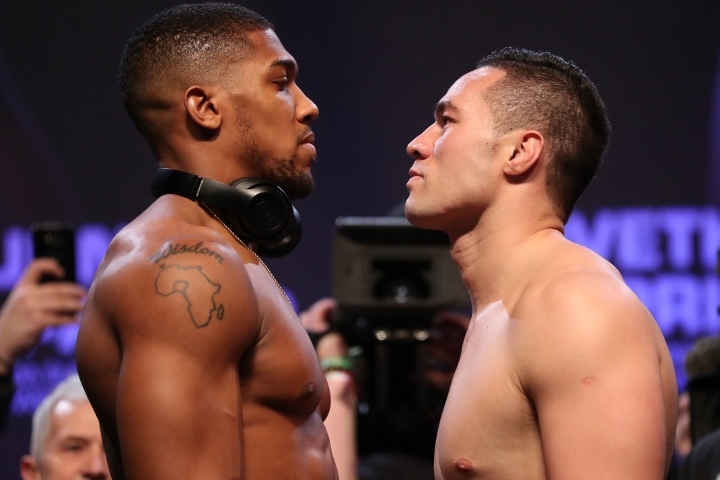 The live broadcast of Joshua’s unanimous-decision victory over Parker, which began at 5 p.m. ET/2 p.m. PT in the United States, drew slightly better ratings than the British superstar’s prior fight. The live telecast of that bout, a 10th-round stoppage of Cameroon’s Carlos Takam on October 28 in Cardiff, averaged 334,000 viewers for Showtime.

Neither of Joshua’s past two wins attracted larger viewership for Showtime than his career-defining victory over Wladimir Klitschko.

Showtime’s live broadcast of Joshua’s epic 11th-round stoppage of Klitschko attracted an average audience of 659,000 on April 29. The same-day replay of Joshua-Klitschko, which aired on HBO, was watched by an average of 738,000 viewers.

The Joshua-Klitschko ratings reflected the magnitude and entertaining nature of their back-and-forth fight, which drew a capacity crowd of roughly 90,000 to Wembley Stadium in London. Joshua dropped Klitschko in the fifth round, survived a sixth-round knockdown and floored Klitschko twice more before their fantastic fight was stopped in the 11th round.

Joshua (21-0, 20 KOs) went the distance for the first time in his pro career against Parker in a title unification fight that didn’t at all resemble his unforgettable battle with Klitschko. The 6-feet-6, 242-pound Joshua out-pointed Parker by large margins on all three scorecards (119-109, 118-110, 118-110), but mostly was content to use his jab and defend himself well while out-boxing New Zealand’s Parker (24-1, 18 KOs).

There weren’t any knockdowns during their fight and neither Joshua nor Parker appeared hurt badly at any point.

Joshua’s fights are televised via pay-per-view by Sky Sports Box Office in the United Kingdom, where the IBF/IBO/WBA/WBO champion has become that region’s biggest boxing star by far. His star power aside, the Joshua-Parker ratings were notably lower than the first heavyweight title fight Showtime televised in March.

Deontay Wilder’s 10th-round knockout of Luis Oritz was watched by a peak audience of 1.2 million viewers and averaged 1.1 million viewers March 3 from Barclays Center in Brooklyn.

Viewership for Wilder-Ortiz was Showtime’s highest for live boxing on that premium-cable network in more than three years. Wilder-Ortiz drew Showtime’s biggest ratings since he won the title by out-pointing Bermane Stiverne in January 2015 at MGM Grand Garden Arena in Las Vegas (peak: 1.34 million; average: 1.24 million).

Unlike Joshua-Parker, the doubleheader featuring Wilder-Ortiz aired live in prime time in the United States, when more viewers tend to watch sports on television.

Wilder (40-0, 39 KOs), of Tuscaloosa, Alabama, wants to fight Joshua next in what would be a huge heavyweight showdown between undefeated knockout artists. Joshua said following his win against Parker that he is open to facing Wilder next.

Though it’s very possible Joshua and Wilder will face other opponents next, preliminary negotiations between their handlers could begin later this week.

Exactly they dont want it

I feel terrible for those 483,000 people who had their Saturday ruined.

[QUOTE=Motofan;18639734]Also, regardless of how many Brit's refuse to believe it (or maybe don't care) Joshua could walk down any street in America and would not be recognized. It's like the Khan vs. Canelo 24/7 where it shows Khan at a…

[QUOTE=Bronx2245;18641278]Fat Dan, and other outlets, even in the UK, are changing the narrative quickly after the Parker fight! Now the headline is "Wilder Ready to go to the UK?" "Why is Deontay Wilder Not Next" " Hearn is a B*tch…