Joshua: It's As Much About Being Smart As About Knockouts

Joshua just feels it’s as important sometimes to box smartly as it is to attempt to take out an opponent. That was particularly true during Joshua’s immediate rematch against Andy Ruiz Jr.

Ruiz dropped Joshua four times in their first fight – twice apiece in the third and seventh rounds – on his way to a technical-knockout win June 1 at New York’s famed Madison Square Garden. That career-altering experience encouraged the 6-feet-6, 237-pound Joshua to be careful versus Ruiz in their second encounter, no matter how much criticism some dissatisfied fans might’ve directed his way when it ended. 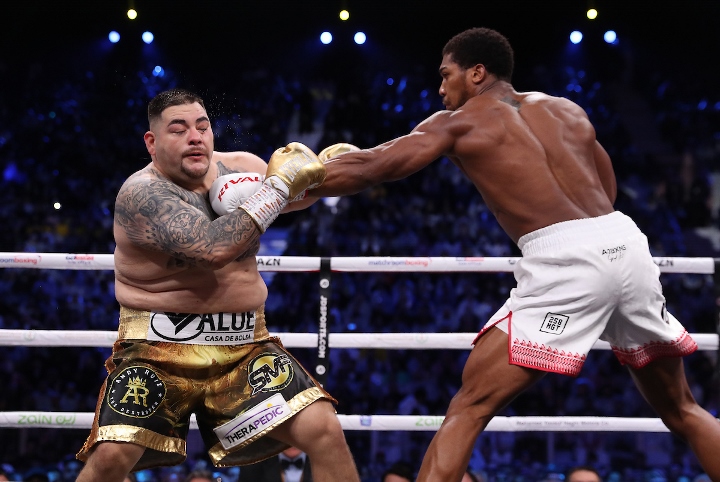 Taking a cautious, technical approach to their 12-round rematch enabled England’s Joshua (23-1, 21 KOs) to win a unanimous decision over Ruiz (33-2, 22 KOs) on Saturday night at Diriyah Arena in Diriyah, Saudi Arabia. The 30-year-old Joshua, who was more than a 2-1 favorite despite losing their first fight, regained his IBF, IBO, WBA and WBO heavyweight titles from Ruiz, of Imperial, California.

“As much as it is about knockouts is as much as it is about being smart,” Joshua said as part of a post-fight interview with BoxingScene.com. “This is a brutal game, a brutal division. We’ve seen a lot of tragedies in the last few weeks slash months, where certain boxers have lost lives and faced really tragic injuries. So, sometimes you have to see an opportunity to take a fighter out. However, sometimes you have to keep it safe and play smart.

“And as you said, what [Deontay] Wilder done – he lost every round [against Luis Ortiz], but he played it smart. And when the opportunity presented itself, look at the outcome, man. You know, boxing is an interesting sport, so I would just say to the up-and-coming fighters, just learn your trade, learn your craft and you’ll figure it out as you go along.”

[QUOTE=Tecnoworld;20246043]I'll give you this one. AJ is really interested in being the governor of hw division, to decide whom to fight and whom to avoid, while gaining millions. Hence he had to desperately try and get his crowns back, avoiding…

Boxing smart is one thing. Avoiding your opponent and clinching for your life entire fight is totally different. Nobody will want to see Joshua's running away for 12 rounds...

[QUOTE=Roberto Vasquez;20245920]I didn't mean he did the same thing. I meant tactically. He won the fight by boxing and moving. Fury doing the opposite to Joshua in another way - he avoided an immediate rematch with Wilder. AJ got straight…

[QUOTE=Tecnoworld;20243947]Nope. Look at the differences: [url]https://www.youtube.com/watch?v=AyP0_YDpWpg&t=27[/url] AJ was simply jumping. Continuously. Far from Ruiz, who was by far too small and slow to get near. Nothing more.[/QUOTE] I didn't mean he did the same thing. I meant tactically. He won…