SAN ANTONIO—After three straight fights against the same opponent, Joshua Franco couldn’t have been more thrilled to stand across the ring against anyone other than Oscar Negrete.

The local prospect seemed equally pleased with his new fighting weight, enjoying a successful return to the junior bantamweight division. It came at the expense of Mexico’s Jose Alejandro Burgos, whom Franco stopped in nine rounds Saturday evening at The Alamodome in San Antonio, Texas.

An accumulation of punches left Burgos out on his feet and defenseless in forcing the stoppage at 2:13 of round nine. 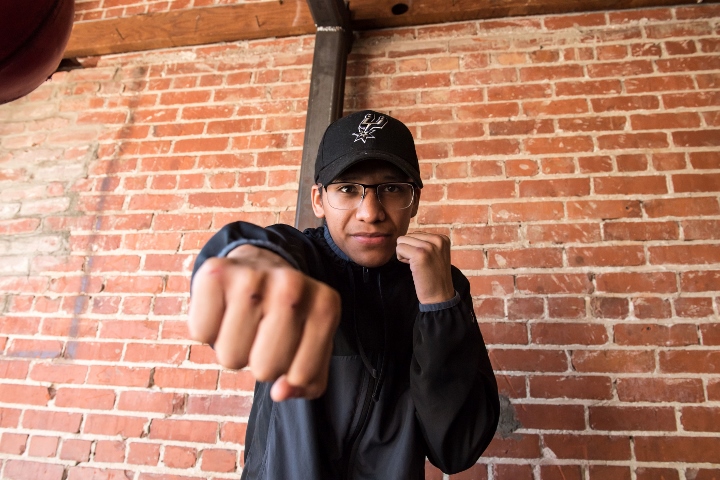 Franco’s trilogy with Negrete set Compubox punching records, but also left the San Antonio native with just one win in three razor thin bouts. The other two resulted in split decision draws, but there wasn’t any uncertainty in who was in control of Saturday’s bouts. Franco put together a steady attack, taking its toll on the more active but less effective Burgos in the opening round and never getting any easier for the 24-year old Guadalajara, Mexico product who was fighting stateside for the first time in his career.

Burgos did his best to make a fight of it, absorbing heavy shots upstairs before sliding back just enough to get off his own power shots. Franco wisely covered up, not concerned in getting caught up in a slugfest much and scoring with a flush right hand which snapped back Burgos’ head.

Two-way action threatened to ensue in round three, with Burgos letting his hands go—averaging nearly 100 punches per round over the long haul—as the crowd rallied behind Franco who always managed to respond during every exchange. Burgos’ wide punches were picked off by Franco, often countered with crisp right hands straight down the middle.

The trend carried forward for the balance of the fight, although Franco’s world class trainer Robert Garcia wanted to see his charge go to the body more often. Burgos’ mode of attack left his chin far too exposed to ignore, however, as Franco timed his aggressive foe coming in, stepping back to avoid the incoming and then always returning fire.

The worst of it came in round seven, the closest Franco came to scoring a stoppage win to that point. Burgos never stopped throwing punches—landing 156 of 885 punches (18%)—but also all but abandoned his defense in the process. Franco—who landed on 253 of 547 punches (46.2%), including 162 of 305 power shots (53.1%)—connected with a right uppercut which snapped back Burgos’ head, with an assortment of power punches bloodying up his face.

Franco would finish the job two rounds later. Burgos (17-3, 14KOs) continued to swing at will, leaving his chin up in the air for a clean right hand which left him out on his feet. Franco seized the moment, connecting with a check left hook to rock Burgos and drive him to the ropes. A barrage of right hands left Burgos defenseless, though still on his feet before being rescued by referee Rafael Ramos.

The win is Franco’s first at junior bantamweight since an eight-round decision over Carlos Maldonado in December 2017. The lone loss of his career came at this weight, suffering a controversial 9th round stoppage versus Lucas Fernandez in March 2018. Four straight bouts followed at bantamweight, including three with Negrete before returning to a weight where he feels he can make a title run.