Joshua: Being A Champion About More Than Just The Belts

Anthony Joshua doesn’t need a sanctioning body’s title in his possession to still feel like a world champion.

Of course, that won’t stop him from doing everything possible to reclaim the very belts he once held.

The 2012 Olympic Gold medalist had to absorb the words “…former unified titlist” for the first time in public at the start of the three-city press tour for his Dec. 7 heavyweight title fight rematch with Andy Ruiz. The bout will take place in Diriyah, Saudi Arabia, just outside the nation's capital and where the event’s first press conference was held on Wednesday. 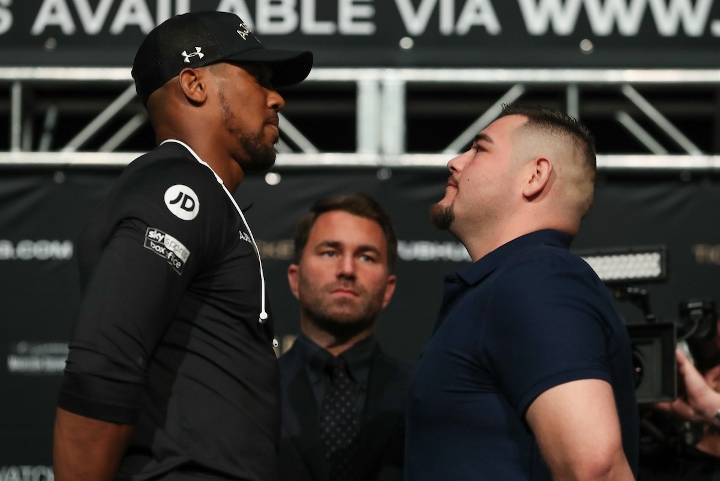 The event also marked the first time the pair of heavyweights were in each other’s presence since the aftermath of their June 1 clash, when England’s Joshua (22-1, 21KOs) made his United States debut. The Madison Square Garden party was crashed by Ruiz (33-1, 22KOs), who scored a dramatic 7th round knockout to dethrone the previously unbeaten Joshua.

It was a humbling experience for the fallen Brit, to say the least. It was also a reminder of how far he’s coming along and just how much work remains to be done.

“My parents’ heritage is from Nigeria and I was born in London,” reflected Joshua while soaking in the atmosphere in Diriyah, where both he and Ruiz will first for the first time as pros. “I learned to box when I was growing up in England, but I was only do it for a mindset thing. I got into trouble when I was younger and I needed to change my mindset.

“Being around the older generation, the wiser generation they gave me knowledge I could use in my later day life. Since then, I’ve been to so many countries around the world, representing Great Britain.”

Joshua’s noted amateur career took him all around the world before heading home for the 2012 London Olympics, where he claimed a Gold medal in the super heavyweight division. From there came a well-celebrated career, developing into one of the world’s biggest draws and by far the biggest gate attraction in the United Kingdom. His last four fights in the UK generated more than 320,000 fans in attendance, unifying all but one of the division’s major titles along the way before running into Ruiz this past June.

The rematch marks the first time since April 2016 where Joshua will enter the ring as an official challenger, but still proudly carrying a championship mentality.

“When we fight, those belts will go in the air. Two warriors will go into the ring, and the best man will walk out victorious.”
The bout will air live on DAZN in the U.S. and Sky Sports Box Office in the U.K.

[QUOTE=Straightener;20037611]This site is full of paid gobs**tes just take it for what it is Boxing talk with few bellends thrown in .... half of these daftys are probably still living in the basement of their step dads house[/QUOTE] Got it…

May the best man get the w

[QUOTE=Straightener;20037611]This site is full of paid gobs**tes just take it for what it is Boxing talk with few bellends thrown in .... half of these daftys are probably still living in the basement of their step dads house[/QUOTE] Indeed. They…

[QUOTE=Baba K;20037597]Not sure about all the Joshua hate...what else is he supposed to say? Sounds like a fighter to me.[/QUOTE] This site is full of paid gobs**tes just take it for what it is Boxing talk with few bellends thrown…

Not sure about all the Joshua hate...what else is he supposed to say? Sounds like a fighter to me.