Joshua: Beating Ruiz Won't Be Time To Celebrate; I Belong There

If Anthony Joshua avenges his loss to Andy Ruiz Jr. on Saturday night, don’t expect much of a celebration from the former heavyweight champion.

The once-beaten Brit believes in his heart that he never should’ve lost his IBF, IBO, WBA and WBO titles. Thus, jumping up and down and/or screaming upon winning those belts back just wouldn’t seem appropriate to Joshua.

“So, I was asked this – will it be a special moment?,” Joshua said during a press conference Wednesday in Saudi Arabia. “I said, ‘No,’ because I know I belong there. So, it’s not special. I know I belong there. I know what I’m capable of doing. So, when I regain those belts, I’m probably just gonna keep cool and stay focused because it’s not a time to celebrate.

“It’s time to keep that challenger mindset and move on to the next target. So, one by one, I’m picking them off. As you can see, I said on that board [that lists undercard fighters Joshua has beaten], I’ve been doing that ever since I started boxing. And Ruiz is just my next target on my list.” 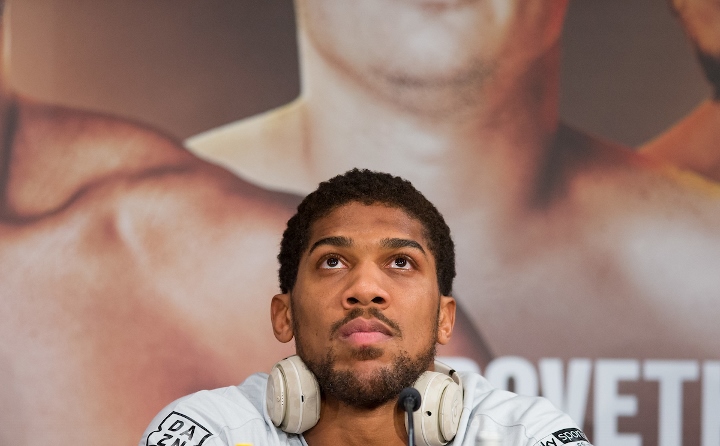 Despite suffering a seventh-round, technical-knockout loss to Ruiz six months ago, Joshua (22-1, 21 KOs) is consistently listed as more than a 2-1 favorite to beat Ruiz (33-1, 22 KOs) in their immediate rematch in Diriyah, Saudi Arabia. The Watford, England, native suffered four knockdowns – two apiece in the third and seventh rounds – when Ruiz stopped him June 1 at Madison Square Garden in New York.

Though handicappers have treated Ruiz as an underdog again, Joshua admits he has drawn motivation from fighting as a challenger. This will be the first time Joshua will face a defending heavyweight champion since he knocked out American southpaw Charles Martin to win the IBF belt in April 2016 at O2 Arena in London.

“I’m used to this position,” Joshua said. “And even when you are champion, I think Andy, as a respected heavyweight, knows that you always have to have a challenger mindset. All of these quotes that us fighters come up with is reality. Challenger mindset, and I’ve always said that previously, when I had the belts around my waist. And now I’m speaking it into existence. This is the challenger mindset. So, I call it back to 16, back to my 16th fight [when Joshua beat Martin]. I’m hungry, determined and focused on the goal.”

The second bout between these 30-year-old heavyweights will be the main event of a Sky Sports Box Office pay-per-view show in the United Kingdom (5 p.m. GMT; £24.95 in HD). The Joshua-Ruiz rematch also will headline DAZN’s stream in the United States (noon ET/9 a.m. PT).

[QUOTE=The plunger man;20230599]Something tells me Joshua is going to do a real number on Ruiz. AJ has some venom in his words[/QUOTE] It's all cliches and corporate waffle. Empty words when the bell goes. Then he'll quickly be getting flashbacks…

Joshua is a damaged goods. He will not recover from the first fight. He will be ko'ed again. Just my two cents.

Josh should be jumping for joy as what's been said about him since that loss it would be redemption and to prove doubters wrong. There's no guarantee it was a one off loss bad night at office like Josh wants…