Molina showed a ton of heart through seven-plus rounds, but Lopez dropped him twice and battered Molina to the point referee Ray Corona had little choice but to stop their fight in the eighth round. Lopez knocked down Molina near the end of the seventh round, but Molina managed to make it to the start of the eighth round on the Errol Spence Jr.-Shawn Porter

Lopez pounced on him as soon as that eighth round began and drilled Molina with various power punches. The courageous Molina remained on his feet when Corona mercifully stopped the bout 39 seconds into the eighth round. 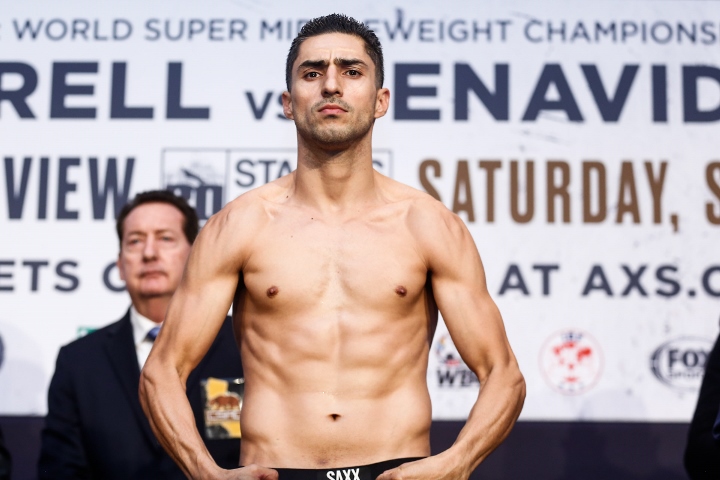 The 35-year-old Lopez (37-8, 20 KOs), of Riverside, California, fought for the first time since his dramatic, majority-decision defeat to former WBA welterweight champ Keith Thurman on January 26 at Barclays Center in Brooklyn. The 36-year-old Molina (30-9, 24 KOs), of Covina, California, lost by knockout or technical knockout for the fourth time in his 13-year pro career.

In the round before their scheduled 10-rounder ended, an overhand right by Lopez buzzed Molina and backed him into a neutral corner with just under a minute to go in the seventh round. Toward the end of the round, Lopez unloaded a left-right combination that made Molina take a knee.

A battered Molina managed to beat Corona’s count again. Lopez landed two more hard right hands to the side of Molina’s head before the bell sounded to end the seventh round.

A ringside physician took a close look at Molina before the start of the eighth round, but he let the fight continue.

Lopez and Molina traded hard shots in the fourth round, following a third round in which the action slowed down a little.

Lopez and Molina picked right up in the second round where they left off in an action-packed first round in which Molina went down. Lopez landed several straight right hands in those three minutes, which caused Molina backed away from him at times.

Lopez snapped back Molina’s head with a right uppercut just past the midway mark of the first round. Molina tried to bob and weave his way out of trouble, but Lopez landed a left hook to the body that made Molina take a knee.

He barely beat Corona’s count and landed a right hand that fended off Lopez just long enough for Molina to make it to the end of the round.

What about Lopez -Ugas?

[QUOTE=ShaneMosleySr;20087173]The fight that was advertised as the most entertaining fight of this terrible PPV card was an absolute mismatch. I’m sure this is going to end up being worth $75 lol.[/QUOTE] You were right. It was worth the money.

[QUOTE=ShaneMosleySr;20087173]The fight that was advertised as the most entertaining fight of this terrible PPV card was an absolute mismatch. I’m sure this is going to end up being worth $75 lol.[/QUOTE] Since ur broke ass cant afford 75 dollars u…

This was a meaningless fight. No point of this mismatch, what so ever.

[QUOTE=Oldskoolg;20087668]The Canelo fight was absolutely ridiculous. He wanted that fight though, the payday I’m sure.[/QUOTE] Yeah the payday no doubt, Lopez was a natural 140 guy.