Joseph Parker: After My Next Fight There Are A lot of Big Fights That We Can Make

Joseph Parker is aiming to have a big year in 2020.

The former WBO heavyweight champion only fought once in 2019, stopping Alex Leapai in June.  He was slated to face Dereck Chisora in October but those plans were scuttled when he fell ill to the effects of a spider bite he suffered in his native New Zealand.

Parker was very upset that he wasn't able to go through with the Chisora showdown.

"Chisora is a fight I wanted to fight because of the wins he has had recently and he has looked good. He has been calling me out and we made the fight happen then 4-5 weeks into camp I felt pretty sick and we went to the doctors and they said it was a spider bite from New Zealand. The doctors pretty much said I was not fit to train or fight. I was so excited and I really wanted to fight but the body was not listening," Parker told BoxingScene.com. 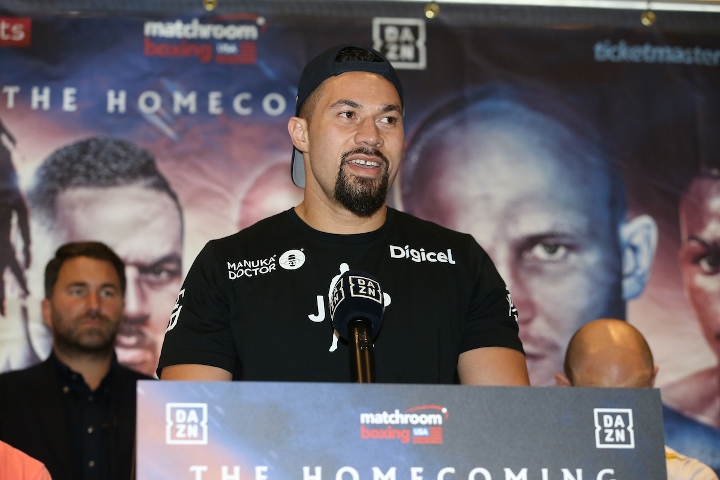 The 28-year-old Parker will return to the ring on February 29th in Texas on the Mikey Garcia-Jessie Vargas undercard that will be streamed by DAZN.  As this article was published, Parker's opponent hadn't been finalized.

After his next fight, Parker has his sights sent on facing the biggest names possible in the heavyweight division.

"The plan is to lock in this opponent and look good, fight well and move onto bigger and better things. There are a lot of big fights that we can make just as long as we win - take care of business first," said Parker.

As for the main event on February 29th, Parker couldn't pick a winner.

[QUOTE=mlac;20355640]If Parker 'was on his bike' agaisnt Ruiz, what was AJ on? a Kawasaki? matey was terrified of a mexican jabba the hut ffs And again, Whyte never 'outworked' parker in any shape or form, so take that 'fact' and…

[QUOTE=Tyistall;20355058]And you are forgetting that Parker was too scared to go toe to toe with AJ hahah. Also, AJ outlanded Ruiz almost 2 to 1 in the rematch, hardly someone who is afraid.[/QUOTE] AJ hid behind the ref the whole…

[QUOTE=mlac;20355640]If Parker 'was on his bike' agaisnt Ruiz, what was AJ on? a Kawasaki? matey was terrified of a mexican jabba the hut ffs And again, Whyte never 'outworked' parker in any shape or form, so take that 'fact' and…

Parker's a genuine threat at the top level. Unfortunately he also seems to be a decent bloke and a good boxer. Those things will hinder his opportunities.