Sitting in his hotel room at the Fantasy Springs Casino without a bead of sweat on him, JoJo Diaz realized it wasn’t going to happen. Try as he might, the final four pounds to get him down to his contracted limit of 130 just weren’t going to come off.

He’d spent the bulk of Thursday wrapped in plastics, stuffed inside a sauna suit, running on a treadmill, shadowboxing and skipping in his hotel room. His body was starting to feel tingly, so devoid of hydration that his muscular energy was gone. He decided to nap, hoping a little rest would give him just enough adrenaline to be able to work out. His alarm went off at midnight, and his body wasn’t responding. After a few more hours, JoJo woke up, turned the heaters to the maximum in his room and ran a hot bath.

The reality that he would lose his 130-pound world title on the scale, but in all likelihood would still have to fight Shavkat Rakhimov the next day anyway dawned on him. Diaz said he broke down three or four times to his team members the day of the weigh in.

Diaz stepped on the scale and as anticipated, was nowhere close to the target, coming in at 133.6. He conceded that he couldn’t possibly make 130 that day, but he could prevent himself from rehydrating past 140 pounds by the next morning in order to salvage the fight. His world title was officially gone, but it would be on the line for Rakhimov.

Diaz’s struggles revealed the unique situation fighters are placed in when trying to make weight during a pandemic. During “normal times,” fighters often rely on the sauna during fight week to sweat out the final pounds without having to expend physical energy on a depleted system. Due to COVID-19 regulations, many hotel facilities have closed their saunas. Diaz didn’t have access to a sauna, which he said might have been able to help him make the weight. According to him, he only had a treadmill and no other gym equipment—not that those would have helped much, as he said his depleted body couldn’t work hard enough to remove four more pounds.

In these circumstances, fighters have to arrive for the final days of fight week in better shape and closer to fight weight than they would have in the pre-COVID era. Fighters’ fitness sins can’t be erased last-minute the way they could before. Such was the case for Diaz. 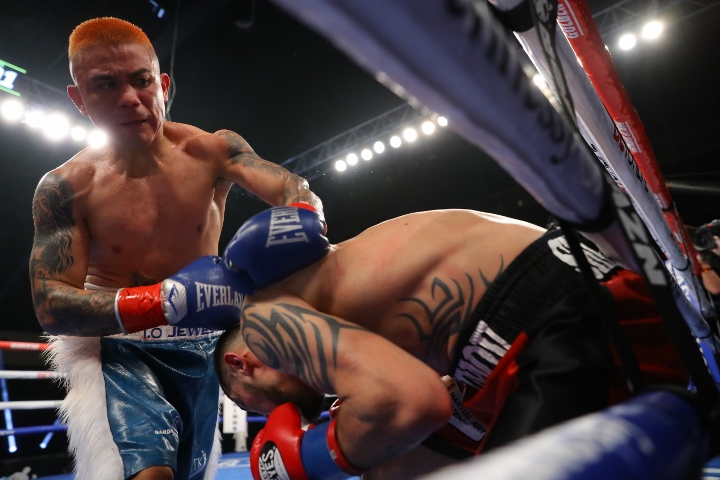 Speculation that Diaz might have trouble making weight for the bout started six weeks prior, when a photo of a heavy-looking Diaz in the ring with Ivan Redkach following a sparring session circulated on Instagram. One user commented “really let yourself go there ‘champ,’” to which Diaz responded “like I ain’t know what I’m doing.”

Diaz might have tried to pass it off as if these were normal circumstances at the time, but they were not. He admitted that in 2020, he hit his heaviest weight ever and attributed it to a variety of factors. He said the worldwide pandemic had affected him mentally, and for large stretches particularly in mid-2020, access to training facilities was restricted. Around the same time, his partner was pregnant with his first child. His cupboards were filled with Oreo cookies and his freezer with ice cream sandwiches and as he told DAZN News during fight week, he was “able to enjoy his food.” He then had to adjust to being a father for the first time.

BoxingScene’s Manouk Akopyan revealed some of the darker issues in Diaz’s life in a report last week. In July, Diaz was involved in a car accident and was charged with his second DUI, which will be litigated later this month. He is also involved in ongoing legal battles between his former management team Heredia Boxing Management and his new advisors MTK Global. In its complaint, Heredia claims that MTK gave Diaz a $100,000 advance against his next purse.

If that is true, that would mean $200,000 of Diaz’s $500,000 purse for the Rakhimov fight was gone before he stepped in the ring—100K to Rakhimov and the commission for missing weight, and 100K to pay back his advisors.

The size differential between he and Rakhimov was stark. After rehydrating, Diaz was noticeably thicker and fleshier than the ripped and toned Rakhimov. From a physical perspective, it looked similar to the visual of a fighter peaking in training camp sparring someone just starting their camp. Diaz was far from his sharpest or his busiest, but his natural ability and elite skillset enabled him to stick on even terms with Rakhimov, even in the home stretch of the fight when he presumably should have gassed out completely.

Following the fight, Diaz’s attitude about missing weight turned from remorseful to defiant.

"I had to try to adapt to it, but my body just felt weak and I couldn’t do it,” Diaz told interviewer Beto Duran. “My health is more important. I still came out here and fought, and I’m not gonna risk my life trying to make the weight, really deplete myself and get hurt in the ring.”

Only Diaz knows whether he physically could have made the weight or not. Perhaps with drastic measures, as he suggested after the fight, he could have, but would have then put himself in a dangerous physical condition. Thankfully, due to the 140-pound rehydration limit the morning of the fight, Diaz wasn’t able to “capitalize” on his extra size the way that other fighters have in the past by blowing weight and simply arriving bigger and fresher than their opponent for the price of a percentage of their purse.

The burden of his mishaps fell squarely on his own shoulders. Diaz gained nothing at all by not making weight. He lost money, he lost his title, and he had to fight in suboptimal condition. He likely lost fans and lost a degree eagerness of networks about airing his next bout. Last week, he told The Athletic he would be betting $30 or $40 thousand dollars on himself to win this fight, a sum he would have then lost. The only thing he didn’t lose was the fight itself.

“There’s no need to f-----g please anybody. I’m doing this for myself and my family. That’s the person that I need to look out for, myself and nobody else,” said Diaz.

One thing is certain—Diaz does need to look out for himself. And if he can’t, someone definitely has to.