Joseph Diaz Jr.’s rollercoaster of a year culminated on the scales Friday when he debuted his freshly colored orange hair and blew weight by 3.6 pounds while preparing for his first fight as a world champion against Shavkatdzhon Rakhimov.

The match against the mandatory challenger Rakhimov was supposed to be Diaz’s first title defense of his 130-pound IBF crown, but the 28-year-old Los Angeles born-and-bred boxer was instead stripped of his status as a champion for his mishap. 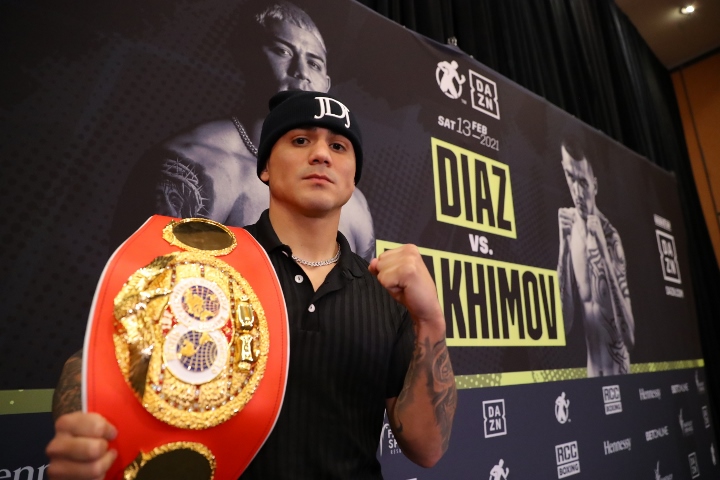 BoxingScene.com spoke to several sources across the sport to understand why the 2012 United States Olympian lost the fight with the scales so delinquently.

As the pandemic stalled the entire sport for most of 2020, sources said Diaz’s distractions outside of the gym, contributed to a drama-filled year impacting his discipline in training.

Diaz is co-trained by his father Joseph Sr. and coach Ben Lira at the Teamsters Boxing Gym in his hometown of South El Monte, California.

Diaz (31-1, 15 KOs) realized his professional dreams by winning his first world championship by turning in a gutsy performance against Tevin Farmer on Jan. 30, 2020 to win the IBF super featherweight championship. The nine-year veteran boxer survived a nasty gash over his left eye to land a close unanimous decision.

Diaz was elated, emotional and immediately hoisted in the air in celebration by career-long manager Moises Heredia.

After months of back and forth banter with Farmer regarding a rematch, Diaz eventually moved on to the Freddie Roach-trained Rakhimov (15-0, 12 KOs).

The fight was announced on Dec. 18, canceled on Jan. 14 when Rakhimov contracted COVID-19 and put back on Jan. 19 for Saturday’s original date of Feb. 13.

In the midst of all of that, Diaz was adjusting to life as a new dad. He became a father for the first time in November when his son Zenith Joseph Diaz was born.

By that point, however, he’d already faced roads filled with adversity.

Diaz was involved in a car accident when he collided with another vehicle and was later charged with DUI when police arrived on the scene on July 17, 2020, BoxingScene.com first learned Friday.

Records of the unreported incident show that the case is still ongoing in California’s Rancho Cucamonga Court. Diaz pleaded not guilty to the misdemeanor. A hearing was held Jan. 5 and a pretrial date was determined for Feb. 24 in which Diaz is ordered to appear.

He will be represented by lawyer Andrew Blair Leventhal.

Diaz previously pleaded guilty to a DUI in 2017 in Orange, California.

Just as Diaz was dealing with the ramifications stemming from his serious legal matter, he signed an advisory deal with MTK Global on Aug. 12, making him the first of several high-profiled, United States-based boxers with which MTK formed allegiances.

The move came as a complete surprise to Heredia. He and his brother Ralph had fostered a relationship with Diaz for over a decade and signed him to a management deal right before his pro debut.

Suddenly the Heredias were dumped and out of the picture.

As reported extensively by BoxingScene.com on Dec. 20, Heredia Boxing Management subsequently filed a nine-count complaint against MTK, Diaz promoter Golden Boy and Daniel Kinahan, the suspected drug cartel kingpin tied with MTK who has come under increased scrutiny of late following a BBC Panorama documentary investigating into his alleged role as a mob boss.

Heredia Boxing Management claimed that Diaz is under a managerial contract until February 2022 and that MTK lured Diaz into an advisory pact through a $100,000 advance against the boxer’s next purse, which “essentially caused Mr. Diaz to mortgage his future away.”

“MTK’s management contract with Mr. Diaz was entered into in violation of California law, federal law, and in complete disregard for the established and lawful management contract Mr. Diaz recognized by the State of California with Mr. M. Heredia,” lead attorney Rajan O. Dhungana wrote as part of a 32-page complaint. “All attempts to resolve this matter with MTK have been met with hostility.

“VGC, LLC, a law firm, has been acting as an agent for MTK to perpetrate its tortious and unlawful activities and is on full notice of their illegality. GBP has also colluded with VGC and MTK to facilitate agreements despite being placed on full notice that neither VGC, nor MTK have lawful authority to conduct and/or engage in the management of Mr. Diaz through either contract or proper licensure.”

Shortly after Diaz’s deal with MTK was announced, Heredia filed a request for arbitration with the California State Athletic Commission, and the case was approved for review. The arbitration is still pending.

“The unfortunate series of distractions and troubles over the past year has resulted in JoJo to be stripped of his world championship title,” Moises Heredia told BoxingScene.com in an interview.

“This is a direct result of poor management by MTK and/or VGC. MTK and VGC undertook to destroy a long-standing, 12-year relationship that found JoJo competing in three world championship contests. Their actions have irreparably harmed JoJo and have directly contributed to this unfortunate outcome. JoJo is a fighter that needed structure and strong support. He instead aligned himself with a team that was not vested in his success. JoJo is a talented fighter with a bright competing future. This scenario clearly demonstrates what happens when individuals who claim themselves as managers and advisors promise to take care of a fighter and fail to deliver. We are hopeful that JoJo recovers from this troubled path.”

Time will tell if Diaz’s alliance with MTK was out of line or not.

Diaz has shown glimpses of his betting habits in the public eye, previously posting winning betting slips online of the Teofimo Lopez versus Vasiliy Lomachenko fight, as well as the recent Super Bowl. Diaz even tweeted in December that he’d bet anyone $150,000 that Errol Spence Jr. would beat Terence Crawford.

Diaz, roughly a 2-to-1 favorite against Rakhimov, even acknowledged that he was going to bet on himself before the bout.

“I already bet on everybody else man, there is no way I’m not going to bet on myself [against Rakhimov]. I have to bet on myself. It’s going to be about $30 to $40 [thousand],” Diaz told The Athletic in an interview this week. “Extra motivation, and extra money in the bank.”

Diaz ultimately didn’t display the determination and diligence required of being a championship-caliber fighter, and his failure on the scale will be costly.

According to the purses listed with California State Athletic Commission, Diaz was supposed to earn $500,000, while Rakhimov, who weighed in at 129.8 pounds, was supposed to make $100,000.

Since Diaz weighed more than two pounds over the limit, CSAC rules disallowed him from attempting to cut weight for a second attempt.

The bout will still take place at the Fantasy Springs Casino in Indio, California on DAZN because the difference in weight between both boxers was not more than seven pounds.

Golden Boy officials told BoxingScene.com that the fight is still on as of Friday night.

If Diaz beats Rakhimov, the belt will remain vacant.

“But now I have this tough challenger ahead of me. We’ve taken this fight very seriously ... I don’t feel like I get the respect that I deserve in this division. In my career in general, I haven’t gotten the respect that I deserve. But it’s all good. I’ve already dealt with so much adversity in my life. I’m already immune to it. I just focus on training as hard as I can to get the job done that night.”

“It’s bad news for everybody especially for the sport of boxing,” Rakhimov promoter German Titov told BoxingScene.com following the weigh-in fiasco. “Of course, there is nothing we can do about it. We have no control over Joseph Diaz and how he trains.”

It remains unknown as of press time if Klimas and Titov were able to siphon additional funds from Diaz’s remaining purse during 11th-hour renegotiations with MTK Global chief strategy officer Paul Gibson and Golden Boy.

Diaz's adversary Farmer also chimed in with his comments on how his former foe fumbled away his big opportunity.

“I got a few phone calls about it and I was just like, ‘Wow!’ To me, he was never a world champion,” Farmer told BoxingScene.com. “As we all know in boxing, you’re not a true champion until you make your first defense. So, he got what he got. What goes around comes around. Karma’s a beast. That’s what he gets. It just shows a lack of discipline. I don’t even know what to think about it. It’s just stupid. He essentially was about to start making real money, and he loses his belt on the scale, like a dummy.”

Diaz has had issues making weight in the past. He came in a half-pound over the 126-pound limit in his August 2018 fight against secondary featherweight title Jesus Rojas. Diaz won the fight via unanimous decision, but Rojas kept the belt.

Diaz suffered his only professional loss at the hands of Gary Allen Russell Jr. in 2018.

He unofficially lost the second fight of his career before a single punch was thrown on Saturday.