John Ryder Would Jump at The Chance To Get Canelo Shot

Smith walked into Liverpool’s Echo Arena a red-hot favourite, to not only beat Ryder but to win with something in hand ,when the Liverpudlian defended his WBA and WBC Diamond super middleweight titles for the second time following his World Boxing Super Series triumph over George Groves in 2018.

Smith v Ryder didn’t go exactly to plan for the champion as the challenger pressed forward working well on the inside, constantly pressuring the six foot three champ nullifying his attempts to control the fight at distance and allowing his much noted power to follow through after. 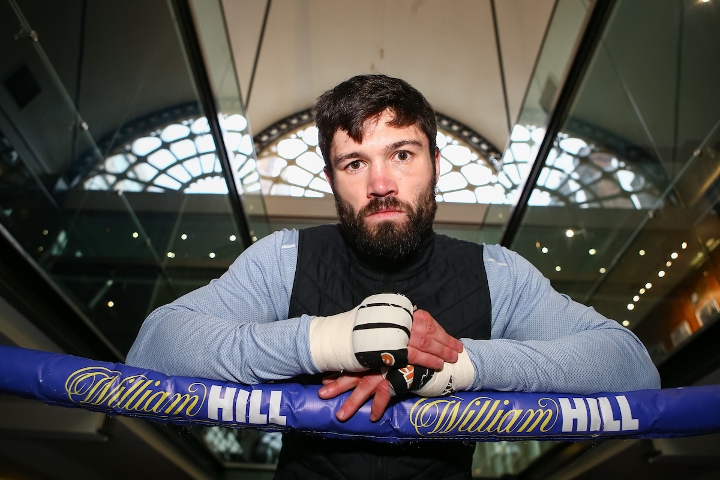 In the end the fight went the distance with Smith winning a unanimous decision with scores of 116-112, 117-111 and another 116-112 from judges Francisco Alloza Rossa, Terry O’Connor and Jose Roberto Torres, respectively. The scores, and for many the decision, provided a backlash for the fighters promoter Eddie Hearn to contend with as fans and media called for a rematch between the pair.

“My anger isn’t towards Callum Smith,” Ryder told Sky Sports reiterating his belief that he won the meeting.

“It’s the judging. I think it’s ridiculous someone had it to Smith by six rounds. There’s no way. If it had been a draw or they’d given it to Smith by one round, you could wipe your mouth of it and say, ‘Well, I knew I needed to get the knockout.’ The scorecards were just so far from the truth, it leaves a sour taste.”

Smith has been demanding big fights and big nights with his lofty standing in the pecking order at 168lbs. Some believe he is the number one while others say his performance against Ryder puts him behind fellow champions Caleb Plant and David Benavidez. The remaining belt holder, Billy Joe Saunders who holds the WBO title, seemed to be in pole position to defend against Canelo Alvarez in Las Vegas prior to the boxing world shutting down during the Coronavirus pandemic. As each month passes the window for Saunders to fight against Canelo gets smaller with the Mexican superstar also eyeing a third fight with Gennady Golovkin.

Wherever Saunders and Smith land, their compatriot Ryder says he wants the rematch with Smith.

“Ultimately, I want the rematch. Eddie Hearn says it can happen. There are big fights for him at super middle or light heavy. I suppose he was hoping for Canelo, but it’s all up in the air.”

And on the subject of Canelo, who does not have an opponent for the fall, Ryder would jump at the chance.

"I'd love to. It's a modern-day great. Don't get me wrong, I'm going in with the ability thinking I can beat him, but it'd just be great to share the ring with one of the greatest fighters of all time," Ryder said.

Ryder can definitely be a filler fight; maybe December

Ryder is tough enough and talented enough, too hang for a few rounds. However in the end canelo would put a solid beating on him.

[QUOTE=skinnystev;20572570]john ryder would be best advised to avoid the consumer of Peds infused "tainted Tacos" alvarez has been shown to cheat anyway he can to win a fight[/QUOTE] Clen and Tacos has vanished. Mexicans can eat as many Clen flavored…

Hearn is just playing with his roster. Eddie: “don’t worry John, you can eventually get a ‘mando’ for Canelo’s WBA Super in 5 years and you’ll be well compensated. So forget about the Smith rematch.” Eddie: “Don’t worry Callum, nobody…