John Molina Explains Why It's Right Time To Retire From Boxing

John Molina doesn’t carry any excuses for what went wrong in his last fight, nor any regret over the pro career he has enjoyed over the past 13 years.

What he does carry, is the sense to know when the end has arrived.

The all-action slugger from Covina, Calif. formally announced his retirement on Tuesday, just days removed from an 8th round stoppage loss to fellow Californian and welterweight hopeful Josesito Lopez. Their bout opened a four-fight Fox Sports Pay-Per-View event topped by Errol Spence Jr.’s thrilling 12-round win over Shawn Porter in their welterweight title unification at the Staples Center in Los Angeles, Calif.

“I take nothing away from Josesito Lopez, he’s a great fighter,” Molina (30-9, 24KOs) insisted to Premier Boxing Champions. “I don’t want anyone to think I’m blaming my loss on being long in the tooth. Lopez was victorious because he was the better fighter.

“For me, there were times during exchanges where I reacted mentally, but physically my body felt like it was trying to keep up. My body didn’t respond at the level I wanted it to respond.” 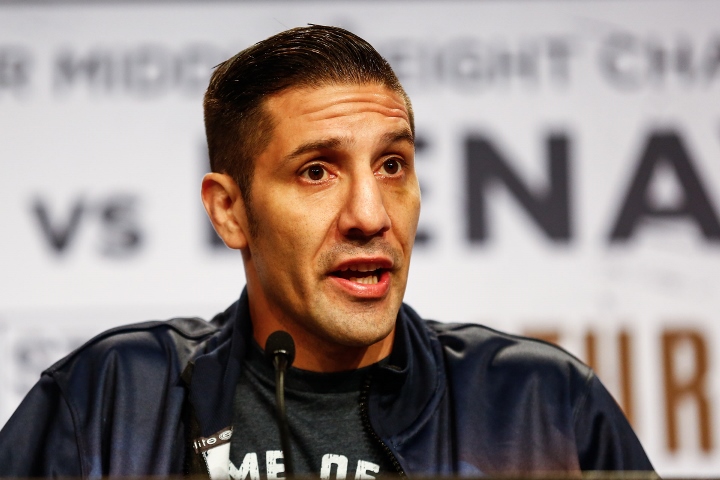 Whether or not Lopez can parlay the win into a shot at Spence or any other welterweight titlist remains to be seen. It definitely won’t be the case for Molina Jr., who—just months ahead of his 37th birthday—has reached a point where he feels he’s already accomplished all that he will achieve in the sport.

“I was never the most technical sound or the fastest guy,” Molina unapologetically admitted to Premier Boxing Champions. “But my heart and will to fight was second to none. And I had a helluva punch.

“If I hit it you with it, it pulled the fight out of the fire on more than one occasion.”

It became his calling card beginning with a bailout 11th round stoppage of then-unbeaten Hank Lundy in their July 2010 ESPN2-televised battle. Molina Jr.—who only enjoyed a modest amateur career before turning pro in 2006—scored a mid-rounds knockdown but was still trailing hopelessly on the scorecards when he pinned Lundy on the ropes and kept throwing bombs until forcing the stoppage.

It paved the way to the first of two career title fights, though his Sept. 2012 challenge of then-lightweight titlist Antonio DeMarco resulted in what many believed to the end of his career. Molina was stopped just 0:44 into their HBO-aired title flght, and had dropped two of his previous three heading into a July 2013 bout with then-unbeaten Mickey Bey.

The fight came three years almost to the day of his win over Lundy, with Bey sporting the same exact record at the time (18-0-1, 9KOs). The Cleveland (Ohio)-bred lightweight was well ahead on the scorecards heading into the 10th and final round when Molina connected with a fight-altering left hook with less than 90 seconds to go. Three more unanswered blows versus a defenseless Bey was enough to seal an improbably vicory in a fight where he trailed by five, seven and nine points on the official scorecards.

Nine months later came his next defeat, though the type where there were truly no losers. Molina and Lucas Matthysse spent 10-plus rounds battering the hell out of one another, each hitting the canvas twice before Matthysse prevailed in the 11th round of their April 2014 junior welterweight slugfest. The bout was hailed by the Boxing Writers Association of America as the 2014 Fight of the Year.

"That was my proudest moment,” Molina fondly recalled of the memorable war. “I didn’t realize what had happened first. Then two days later, people that have been in the business for 30 years; writers, analysts, fighters, all began contacting me and telling me that they actually had to turn away from the fight because it was too gruesome to watch.

“That’s when I realized what we accomplished that night.”

As unforgettable as was the bout, it also sparked a three-fight losing streak before winning his next two, including a June 2016 upset win over former 140-pound titlist Ruslan Provodnikov. The Showtime-televised victory opened the door for the final title challenge of his career, though coming against one of the game’s very best pound-for-pound in then-reigning World junior welterweight titlist Terence Crawford. Molina was stopped in the 8th round, not returning to the ring for another year.

What a return it was, as he once again found himself in a Fight of the Year-level war. Molina recovered from an early knockdown to twice drop and eventually stop Ivan Redkach in the 4rh round of their Dec. 2017 slugfest. It would prove to be the final win of his respectable career, having suffered back-to-back losses to then-unbeaten Omar Figueroa this past February before running into Lopez.

There stands a chance that Molina will find his way back to boxing in some capacity. For now, he’s just looking forward to some much needed downtime.

“There are things that I want to pursue, but I will announce that in that every near future,” reveals Molina, who will spend the next few months chilling with his family, including his two adolescent daughters Raenah (who celebrates her 7th birthday in November) and Riley, three. “Now I can spend time with my family, enjoy my daughters. You got to remember boxing is demanding both physically and mentally. So even physically when I was home, mentally I was checked out, because I was getting ready to go to war.

“I don’t mean to sound cliché because I mean this wholeheartedly: I want to thank everyone for keeping me relevant. For watching my fights, however you supported me. Just know that I represented you guys, that dreams do come true. I heard a lot of ‘no’ before I heard that one ‘yes.’ I kept fighting and fighting and finally I got there. And by getting there I mean, being recognized on a world level. To where, when you heard my name mentioned in a fight, you knew that’s exactly what it was going to be: a fight.”

John was always fun to watch. Unfortunately in his last fight he was fighting with his left way to low. It could had been a great fight but he got hit good too early in the fight and never adjusted.

One of my favorite non champion fighters of all. I always looked forward to his fights. Strange, but when I saw he was fighting on the Spence undercard, that sealed the deal for me to buy the PPV. I will…

Yeah it is time. He gave the sport plenty of thrilling moments. He’s been a gladiator in that ring.

[QUOTE=PittyPat;20097441]I'll always have love for Molina for what he did to Bey, and that savage war against Soto. [B]Another blood and guts warrior we'll hopefully remember and appreciate more in the years gone by[/B].[/QUOTE] ... John Molina did his part!...…

This guy was never even paper champion level, top be honest. He lost nearly all important fights, only beat Provodnikov.