Long Island's Joe Smith powered his way to victory over Jesse Hart, outlanding him 115-54 in that department and landing the harder shots all night. The retreating Hart avg'd just 47 punches thrown per round to Smith's 48. 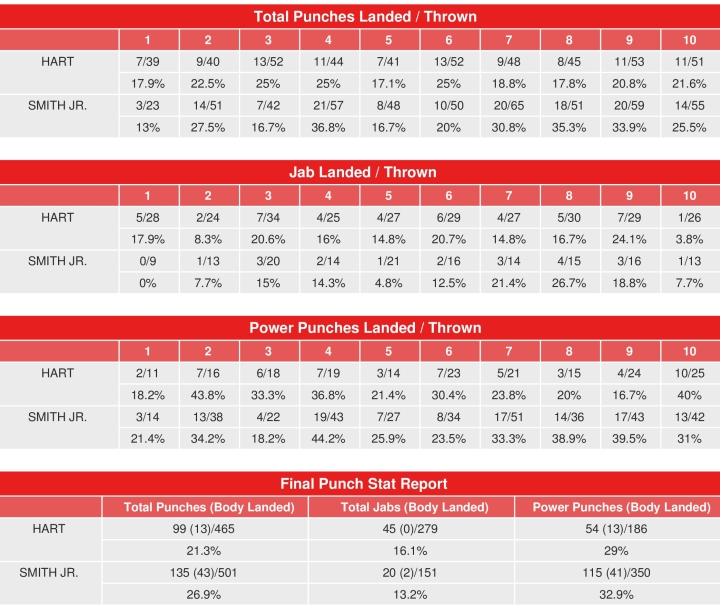 Atlantic City, New Jersey - In a crossroads battle at light heavyweight, Joe Smith (25-3, 20 KOs) showed his power was too much for Jesse Hart (26-3, 21 KOs), who failed to get revenge for his mentor Bernard Hopkins.

Smith came out pressing in the first round and Hart was on the move, looking to box and using the jab. There was a lot of holding by Hart in the second round. At the end of the round, Smith rocked Hart with a hard hook, which forced Hart to hold on.

Hart managed to box a lot better in the third. Smith came back in the fourth, with numerous power shots landing and a lot of pressure being applied. He had Hart rocking at the end of the round. A much closer fifth, with Smith doing most of the hard work. Smith was landing the harder and better shots in the sixth.

Hart came out jabbing well in the seventh. But Smith took things over with hard shots and dropped Hart down. Not enough time for Smith to finish him off. Smith then controlled the entire eight.

In the ninth, Hart was getting hit very often and sustained a serious cut above his left eye. During the tenth, Hart was trying his best but he was being stung and shook up by the bigger punches of Smith.

[QUOTE=DeeMoney;20319994]The premise was based on compubox you could only give him rounds 3 & 6. My point was round one was close enough, numerically, that he could have also received that one- based solely on the punch stats[/QUOTE] Yes I…

[QUOTE=MulaKO;20319555]Why would you give him the first round[/QUOTE] The premise was based on compubox you could only give him rounds 3 & 6. My point was round one was close enough, numerically, that he could have also received that one-…

[QUOTE=DeeMoney;20319552]Why not Rd 1?[/QUOTE] Yeah true just by looking at the numbers, but I thought Smith caught him with a good right hand in round 1 and hurt him, was the first of the holding for dear life clinches. So…

[QUOTE=YoungManRumble;20319545]I know it's not a realistic representation of who won the fight but based on compubox alone looks like you could only fairly give Hart 3 and 6[/QUOTE] Why not Rd 1?