Joyce and Ngannou sparred for eight high impact rounds at a gym located in Las Vegas.

In the last few weeks, Ngannou and Whyte have been trading words in the press. 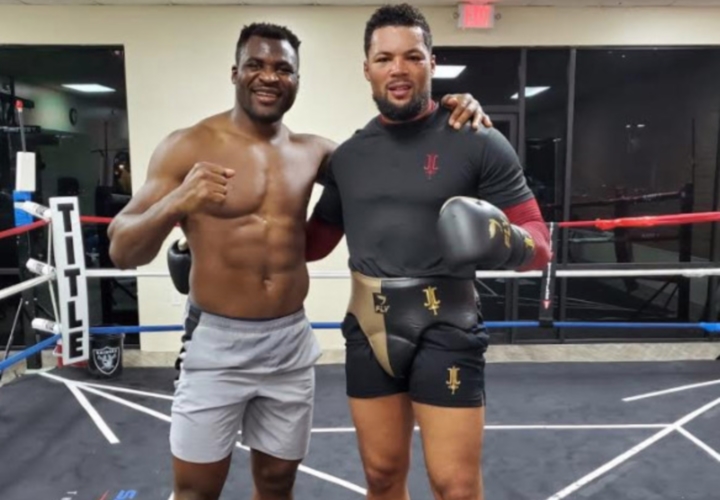 According to Jones, the sparring session took place earlier this year.

His boxer was training in Las Vegas for the scheduled fight with Daniel Dubois, and Ngannou was getting ready for a fight in the UFC - which he won in 20 seconds by knockout.

"Let me tell you something about Ngannou - he can box at a high level," Jones told Sky Sports.

"We were going to spar inside the cage - we had no problem doing that, as long as it was just boxing. But he said no, and he came to our gym in Vegas. Ngannou was standing in a weird stance. Then just stood upright and started throwing huge bombs at Joe's head! It took Joe a round to work him out. Ngannou and Joe went eight rounds of holding their feet. It was the most entertaining spar I've ever seen Joe in. The hairs on the back of the neck stood up."

"Joe, when he spars, likes to work with the other guy but Ngannou was in no mood for a technical spar. He was there to put leather on Joe's face. Joe looked at me and [his trainer] Ismael Salas as if to say: 'Let's have it, then!' They went to war. They traded right hands for fun. Ngannou was throwing his right hand from his boots! Ngannou has a great chin. Everybody knows Joe does too. I told Ngannou after the spar: 'You can [come to boxing] no problem, this is easy for you'. Ngannou is one of the strongest men you will ever see in any combat sport."

Promoter Eddie Hearn, who works with Whyte, is planning to speak with UFC President Dana White about the possibility of a fight with Ngannou.

Both Whyte and Ngannou are very interested in boxing against each other.

Whyte is currently training for a scheduled fight with former WBA world champion Alexander Povetkin, which is likely taking place at the end of July or early August.

Ngannou is Wilder with even worse form

I always tend to take the boxer's side in these cross-sport fights. However i'd love to see Ngannou bang Whyte out.

I feel if wilder can go all the way in boxing ,i really think nganou chose the wrong sport,bomb squad would be renamed nuclear bomb squad

Nganou if you look at his highlights can hurt you with 4 inch left hooks,wild as he may be he is accurate as hell and only needs to land one punch from any angle,if he started boxing i wouldnt be…

[QUOTE=job43;20583259]We no Francis is not doing nothing in a fight with a real boxer in between the ropes. He can lung and “swing from the boots” all he wants. Whyte or anyone else in the top 40 is gonna break…