Undefeated WBA interim-champion Marcus Browne (23-0 16KO) let it be known that he plans on knocking out former world light heavyweight champion Jean Pascal (33-6-1 20 KO 1NC), and doing it in rapid fashion, when the two meet in the opening bout of a PBC on FOX tripleheader.

"Don't blink, I'm knocking his ass out," said Browne at the kick-off presser that took place at the Barclay's Center a couple of weeks ago.

Browne is fighting for the first time since his twelve round decision win over Badou Jack, which took place on the undercard to Manny Pacquiao vs. Adrien Broner back in January at the MGM Grand in Las Vegas. 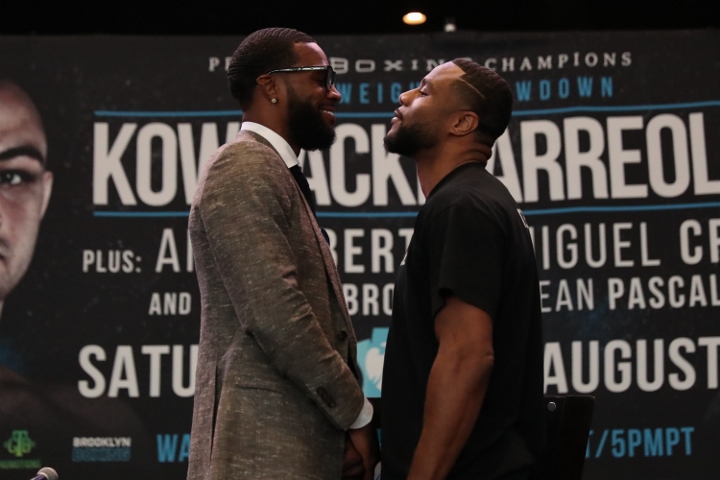 The fight with Pascal takes place at Barclays on August 3rd.

Pascal has only been stopped twice in his career, and both of those defeats were administered by the same man, Sergey Kovalev.

And now Browne wants to upstage Kovalev's accomplishment, by stopping Pascal in the first half of the fight.

Pascal, who back in November went the distance with full WBA champion Dmitry Bivol, has laughed off the prediction by Browne.

"He sounds crazy with that early knockout talk. In his last fight he couldn't finish off a man who was bleeding from one of the worst cuts I've ever seen and you're stopping me early? C'mon bro, be for real...and that's his best win by far. I deal with facts, I've been there done that. I've fought and beaten better fighters than Marcus Browne, he's just a regular guy to me. [He's] good, not great.... nothing special at all. I'm undefeated against southpaws and it will stay that way come August 3rd," Pascal stated to BoxingScene.com.

"I  hope he fights like he's talking and doesn't turn into the octopus he's been since the amateurs when I put that heat on him."

browne will stop him pascal is damaged goods now

[QUOTE=slimPickings;19889045]Pascal would do well not to get stopped. Way past his sell by date. He is just "selling" his name at this point. If Marcus loses to him he should seriously consider another line of work.[/QUOTE] Marcus isn’t gonna stop…

Pascal would do well not to get stopped. Way past his sell by date. He is just "selling" his name at this point. If Marcus loses to him he should seriously consider another line of work.

[QUOTE=_Rexy_;19888750]Pascal just got masterclassed in his last outing. He’s just getting paid now.[/QUOTE] Bivol didn't impress not much of a master class.

[QUOTE=_Rexy_;19888750]Pascal just got masterclassed in his last outing. He’s just getting paid now.[/QUOTE] So Jean Pascal got some good rounds in vs. Dimitry Bivol, good. I think Marcus Browne can do a better job with a much sharper Pascal, this…