NEW YORK – An accidental head-butt helped Marcus Browne’s cause in his championship-clinching win six months ago in Las Vegas.

Jean Pascal upset Browne by technical decision when their scheduled 12-round light heavyweight title bout abruptly ended due to a cut Browne sustained during the eighth round. Once their fight went to the scorecards at Barclays Center in Brooklyn, Pascal benefitted from flooring Browne three times and won by the same score on each of the cards.

All three judges – Glenn Feldman, Julie Lederman and Steve Weisfeld – scored their fight identically, 75-74, for Pascal. Referee Gary Rosato stopped their championship match at 1:49 of the eighth round because a New York State Athletic Commission physician determined Browne shouldn’t continue due to the disgusting gash over his left eye.

“Boxing is boxing,” Pascal told FOX’s Heidi Androl during his post-fight interview. “We clashed heads. But at the end of the day, I was winning the round. I dropped him three times. It was a close fight, but I believe I was winning.”

The 36-year-old Pascal (34-6-1, 20 KOs, 1 NC), a former WBC 175-pound champion champ from Laval, Quebec, knocked down Browne once in the fourth round and twice in the seventh. He became a two-time champion and took the WBA interim championship from Browne (23-1, 16 KOs) that the 2012 U.S. Olympian won in his previous fight.

FOX televised the Pascal-Browne bout as part of a tripleheader. Staten Island’s Browne left the ring before Jimmy Lennon Jr. announced the decision, so that a doctor could tend to his cut. 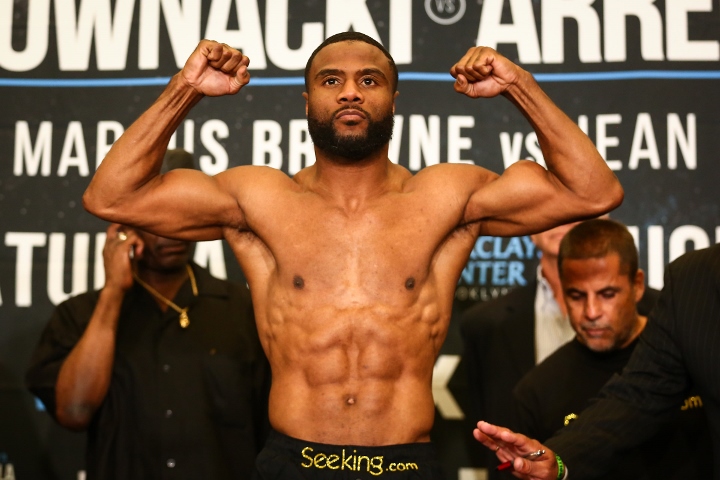 Browne, 28, attempted to make the first defense of the WBA interim light heavyweight title he won from Badou Jack by unanimous decision in his last fight January 19 at MGM Grand Garden Arena in Las Vegas. Sweden’s Jack (22-2-3, 13 KOs) had to fight through a terrible cut that at times turned his face into a bloody mess, but Browne already was beating him convincingly when an accidental clash of heads caused a long laceration in the middle of Jack’s forehead during the seventh round.

On Saturday night, Browne was trying to get back into the fight following a disastrous seventh round when their heads came together about as hard as possible just after the halfway point of the eighth round. Blood squirted from a nasty gash over Browne’s left eye, Rosato called for a break and a ringside physician determined he shouldn’t continue.

After an uneventful sixth round, Browne clipped Pascal with a left uppercut 40 seconds into the seventh round. Pascal winced when he and Browne clashed heads at about the halfway point of the seventh.

Browne was in control until there were about 30 seconds to go in the seventh round. That’s when Pascal caught him with another counter right that dropped Browne again.

Browne stumbled into his own corner when he got up from that knockdown. The action didn’t resume until there were 13 seconds remaining in the round, but Pascal was able to score another knockdown before it ended.

Rosato flung Pascal to the canvas as he separated him from Browne once Browne went down. Browne again answered Rosato’s count and the round ended before the action could continue.

Browne began the fifth round on steady legs after withstanding a knockdown early in the fourth round.

Pascal and Browne traded vicious body shots with just under a minute to go in the fifth round. Right after that exchange, Browne landed a hard left and a solid right to Pascal’s head.

A counter right hand by Pascal dumped Browne flat on his back about 55 seconds into the fourth round. A surprised Browne answered Rosato’s count, and largely held and moved his way to surviving the final two minutes of that round.

Browne battered Pascal with eye-catching left hands early in the third round. The resilient Pascal kept coming forward, though, and prevented Browne from landing anything hard during the second half of the third round.

Midway through the second round, Rosato broke up Browne and Pascal as they hit one another behind the head. Browne used his jab effectively later in the second round and kept Pascal from getting off his punches.

Pascal caught Browne with a lunging left hook with about 1:15 to go in the first round. Earlier in the opening round, Browne’s hard left to the body backed up Pascal.

[QUOTE=_Rexy_;19965435]and that’s where having too good a chin will get you in trouble. Some guys have a bad night and get KTFO. Pascal just took abuse lol[/QUOTE] Yeah ikr and getting knocked out is better than taking a 12 round…

what the hell i thought pascal retired 5 years ago. is this a typo

[QUOTE=KillaMane26;19965391]Lmao that's a hella understatement... I felt like Segey wuda killed him if ref aint stop it.[/QUOTE] and that’s where having too good a chin will get you in trouble. Some guys have a bad night and get KTFO. Pascal…

[QUOTE=_Rexy_;19965317]Bad night at the office lol.[/QUOTE] Lmao that's a hella understatement... I felt like Segey wuda killed him if ref aint stop it.