The redemption tour is underway for Jarrell Miller. Whether or not the boxing world is ready to embrace his ring return will depend on the steps taken to clean up his image.

Talks have swirled of the unbeaten heavyweight inking a co-promotional deal with Top Rank, Inc., although sources have informed BoxingScene.com that such a deal is not quite at the finish line. An announcement is expected in the coming days, although there remains a likelihood that he will ultimately go all of 2019 without a fight on his ledger.

Whenever his next assignment comes, it will mark the first piece of in-ring action for Brooklyn’s Miller (23-0-1, 20KOs) since a 4th round knockout of previously unbeaten Bogdan Dinu last November in Mulvane, Kansas. The fight streamed live on DAZN, his second appearance on the over-the-top (OTT) media service as per an agreement between primary content provider Eddie Hearn and Miller’s co-promoters Greg Cohen and Dmitry Salita. 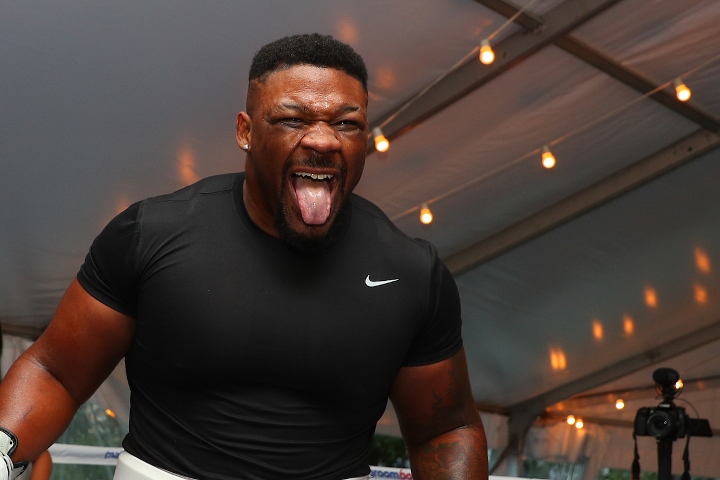 The arrangement was to lead to Miller landing a dream opportunity versus then-unbeaten and unified heavyweight titlist Anthony Joshua, which was to take place June 1 at Madison Square Garden in New York City. A career high payday—for all involved in Team Miller—and a title fight taking place mere miles from his hometown went up in flames following his well-documented drug testing follies, as he came up positive for multiple banned substances through random drug testing conducted by Voluntary Anti-Doping Agency (VADA).

Because the test results came while Miller was unlicensed by the New York State Athletic Commission (NYSAC), the now 31-year old heavyweight was able to avoid a formal suspension by the commission, which would have been recognized nationwide as per the terms of the Association of Boxing Commissions (ABC). Instead, NYSAC denied his application and flagged his Federal ID noting that other commissions would have to contact its office in the event he sought to apply for a license elsewhere.

The only form of punishment handed down—other than Miller losing out on a life-changing paycheck—came from the World Boxing Association (WBA), who claimed he was suspended for six months but whose limitations in disciplining athletes merely meant it wouldn’t sanction any planned fights during that period. Miller didn’t test the system, honoring his longtime standing with the WBA and using the period to sit out before planning his return.

During that time, his team sought the best platform to stage the comeback, leading to months long talks with Top Rank staff, according to sources. Miller himself teased the direction of his career while on site at MSG’s Hulu Theater for a September show promoted by Hearn, a moment which came with his first public apology and also hoping to leave the door open for future business together.

“I’m a man... I’ve always respected what you do, even when you bashed me on camera,” Miller said to Hearn in the presence of BoxingScene.com and other reporters during a post-fight press conference late into the evening. “But I still got love for you. I think you’re a great businessman but uh…do you still want to promote me?”

Hearn laughed at the suggestion, though appreciating the fact that he finally came clean—figuratively, at least.

“I’m a human being. Life happens, just do better,” Miller noted. “Be a better person, taking the wrong information that didn’t need to be taken, going in the wrong direction. It happens in life. Sometimes we make decisions that cost us money, cost us opportunity. The main thing is being better, understanding and learning from your mistakes. I’m not going to sit here and bash Eddie. We’re all human beings. We all mistakes. On to bigger and better things. We don’t know IF ESPN is the move, we’re in negotiations right now but let’s see.”

It seems that ESPN has become the move, although it’s not as simple as signing a contract and immediately jumping into the ring. At the very minimum, there will come public demand for Miller to enroll in some respectable form of random drug testing—ironically, a standard to which Hearn would have held him as his Matchroom Boxing USA company has been by far the most consistent stateside outfit in contracting the services of VADA for its events.

Top Rank, to put it mildly, has not. The 50+ year old promotional outfit, headed by founder, chairman and Hall of Fame promoter Bob Arum, has long served as an industry leader in the sense of developing talent and having its hand in the biggest events in boxing history.

Its current and long-term deal with ESPN and accompanying platforms has come with high praise from the media but also with its share of questionable moves. Often lost in the shuffle among the media—whether for fear of backlash or general disinterest altogether—is its selective nature in which event carry extensive testing, and which simply settle for standard testing provided by the presiding commission.

In that sense, it will be up to Miller and his immediate team to take a proactive approach. As much has long been whispered in his ear, although confirmation of his enrollment and proving he’s a clean fighter will be the most important step in truly cleaning up his act.

Big Baby Miller on the Wilder vs. Fury undercard

[QUOTE=PBR Streetgang;20156225]Yeah, he's definitely being lined up to fight Fury or provide leverage as an alternative to Wilder at the negotiation table with PBC. I was at the Gvozdyk/Beterbiev fight and Fury and Miller were there talking to each other…

[QUOTE=STREET CLEANER;20155785]Now you know who Fury's next opponent might be. Two PED users going at it.[/QUOTE] Yeah, he's definitely being lined up to fight Fury or provide leverage as an alternative to Wilder at the negotiation table with PBC. I…

Inactivity will hurt big baby more than any heavyweight will.