Bakhtiyar Eyubov bravely tried his best to test the gifted Philadelphia welterweight, but the shorter, slower Eyubov was no match for the one the sport’s top prospects on the Claressa Shields-Ivana Habazin undercard. Ennis knocked down Eyubov twice during the first round and mostly pounded away at him until referee Earl Brown stopped their one-sided fight 34 seconds into the fourth round at Ocean Resort Casino’s Ovation Hall.

The 22-year-old Ennis improved to 25-0 and recorded his 23rd knockout. Kazakhstan’s Eyubov (14-2-1, 12 KOs, 1 NC) lost inside the distance for the first time since making his pro debut nearly eight years ago. 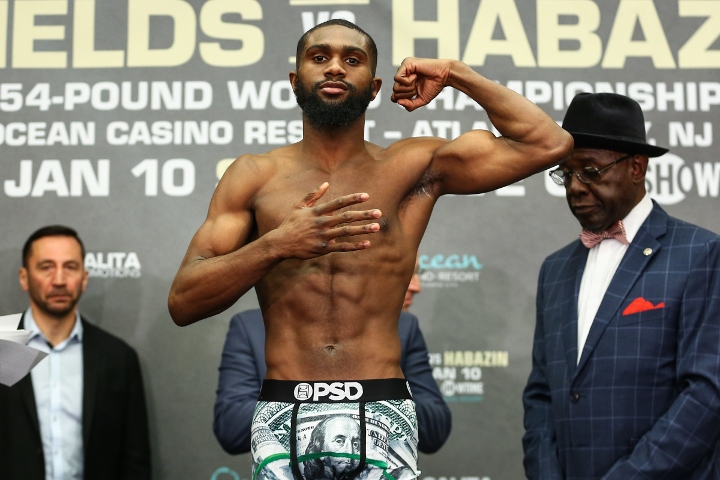 Eyubov’s beating resumed as soon as the fourth round started. That’s why Brown wasted no time stepping in to end the fight.

After suffering two knockdowns in the first round, Eyubov kept coming forward in the second round. Eyubov even landed a couple hard right hands on Ennis, who took those flush punches well.

Eyubov moved forward from the opening bell, but Ennis unloaded rights and lefts to his body throughout the first round. A left hand to to Eyubov’s head sent him to the canvas about halfway through the first round.

A stunned Eyubov got off the seat of his trunks, only to take a terrible beating for the remainder of the opening round. A short right hook by Ennis sent him to his gloves and knees with just over a minute to go in the first round.

A courageous Eyubov got up again and somehow made it to the end of the first round.

[QUOTE=Wolfie*;20322861]At the age of 22, Canelo fought Kermit Cintron, Shane Mosley, and Austin Trout and 2 months after he turned 23, he fought Mayweather. Don't compare Canelo to this unproven dude. Shows how dumb you are.[/QUOTE] and canelo is the…

[QUOTE=glenn mcrory;20317157]lol Ortiz uses him like an old pair of boots that belong to your ex who took all your money and kids(all of which look nothing like you down to skin color) and dog and left you for Chad…

[QUOTE=Mammoth;20317662]Not a PBC fighter[/QUOTE] i consider anyone fighting on showtime a pbc fighter..lol...yes technically youre right...