Every comeback needs an opponent.

But as for James Kirkland’s latest ring return, at least one man believes they chose poorly.

That man is Marcos Hernandez.

“I think a lot of people know of James Kirkland because of his aggressive style. He fought Canelo so he’s fought at the highest level possible,” said the 26-year-old Californian, who still resides in his native Fresno. “A lot of people will watch this fight because they will wonder what is left of James Kirkland.

“The problem for Kirkland is, that I am in my prime. I am going to make a statement in this fight and cash in on this opportunity.”

For those unaware, Kirkland is approaching the third fight of a comeback that sprang from four-plus years away from the ring following a brutal third-round KO by Alvarez at Minute Maid Park in Houston.

He stopped sub-.500 journeyman Colby Courter in a single round in August, then went two rounds in dispatching an equally unheralded Jas Phipps in November.

Those wins proved Kirkland, now 35, can still steamroll overmatched opposition, but Hernandez, with 14 wins and a draw in 18 fights, sees himself as much more than a barely-qualified speed bump.

They’ll meet on March 14 atop a PBC Fight Night card on Fox Sports 1 from the MGM National Harbor outside of Washington, D.C.

“I was very excited when I heard about it. James Kirkland is a big name in the sport of boxing and coming off my last performance, this is a very big fight and opportunity,” Hernandez said. “Also, the fact that it is headlining a PBC card as well is a very big deal for me.

“This a great chance for me to get back into the top of the division and look toward the third fight with Jeison Rosario. When I heard about the fight from my team, I accepted it immediately and knew this was the chance for me to make a major statement, and get back in the mix.”

If the name Rosario sounds familiar, it should.

Hernandez and the Miami-based Dominican tangled twice across 12 months in 2018 and 2019, with the first fight ending in a split draw and the second going to Rosario by a ninth-round TKO.

So, needless to say, Hernandez sees Kirkland as his path back to the new champion.

“I am a world title-caliber fighter and Jeison Rosario winning a world title was nice to see, but I want a third fight with him, badly,” he said. “All that meant to me was that I am one of the best fighters in my division. I have fought tough opponents on the way up to make me into a fighter a lot of fighters will avoid. I am very focused and understand a win on this platform, on this stage against James Kirkland, enters my name into a lot of exciting fights – with Jeison Rosario possibly being one.” 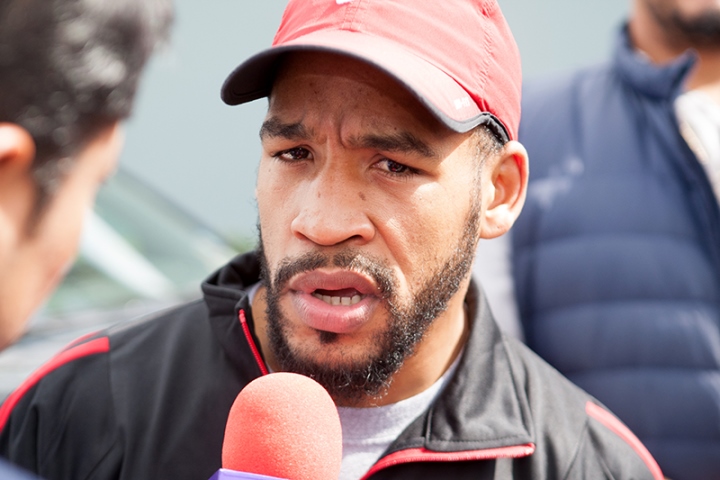 Hernandez debuted as a pro in 2013 and won nine straight before a split-decision loss to Kyrone Davis in 2017. He drew with Rosario in a six-rounder two fights later, then won two straight before the Rosario rematch, a defeat of Francisco Javier Castro and an eight-round loss to Kevin Newman II in his last three.

“It is no secret what Kirkland is going to try and do, but at the same time my whole career I have fought tough fighters,” Hernandez said. “(Rosario) has a lot of similarities to James Kirkland but in my opinion is a much better fighter than Kirkland at this point.

“The key for me is Kirkland is going to fight my fight and I will set the tone early.

“I know I am a good fighter. I am not a fighter that was babied. I have always competed at a high level early in my career. I have a great team and I believe in myself fully. I also fight for my family, and I feel like a lot of fighters fight because they want a bit of fame or money, but I fight for something much deeper than that.”

Hernandez will spend much of the time between now and fight night sequestered in Riverside, Calif., where he’ll work with trainer Henry Ramirez and a newly-hired strength and conditioning coach.

He said he’d already been in the gym prepping to be offered a fight, and suggested that Kirkland will be in over his head regardless of how he chooses to approach their match.

“No matter what James Kirkland does, I will win,” he said. “If he comes out aggressive he runs the risk of being knocked out or out-boxed. If he tries to box with me, I’m going to show my superior class. I’m on a comeback mission and I’m going to win this fight, or die trying.”

WBA flyweight title – Kiev, Ukraine
Artem Dalakian (champion/No. 7 IWBR) vs. Josber Perez (No. 12 WBA/Unranked IWBR)
Dalakian (19-0, 14 KO): Fourth title defense; Won by KO/TKO in 14 of 18 fights in Ukraine
Perez (17-2, 15 KO): First title fight; Lost by decision in only previous fight outside Venezuela
Fitzbitz says: Dalakian is a rugged guy at this weight against any opposition, but particularly against a guy who’s never been on this level and lost the only time he ventured away from home. Dalakian in 8 (99/1)

Vacant WBA “world” bantamweight title – Allentown, Pennsylvania
Liborio Solis (No. 1 WBA/No. 35 IWBR) vs. Guillermo Rigondeaux (No. 2 WBA/Unranked IWBR)
Why it’s trash: I love Rigo. You love Rigo. Darn it, anyone who has a good idea of what they’re looking at in a boxing ring loves Rigo. But while I’m hoping he wins here and excited about the idea of a subsequent meeting with a “Monster,” the only WBA belt at 118 belongs to Naoya Inoue. Period.

I remember when Kirkland fought Perro Angulo, it looked like they were fighting underwater

Is Ann Wolfe still mothering, sorry coaching James? Only Ann can get through to the mad dog.

Looks like a better fight than I initially thought after seeing Hernandez lose to Newman. I didn't realize he drew with Rosario. Like others have said, Kirkland is always fun to watch. Side note: Anyone else impressed with how he…