Hearn: Wilder-Fury Will Be Terrible; Fury Will Get Knocked Out

Wilder’s rematch clause would probably preclude a Joshua-Fury fight from happening immediately if Wilder were to lose to Fury at Staples Center in Los Angeles. Hearn suspects Wilder won’t have to exercise that contractual right because Joshua’s promoter can’t see Fury defeating Wilder in their fight for Wilder’s WBC heavyweight title.

“I think it’s gonna be a terrible fight and I think he’s gonna stink the place out,” Hearn said in reference to Fury. “He may even win the first couple rounds, but I do think he’ll get knocked out.” 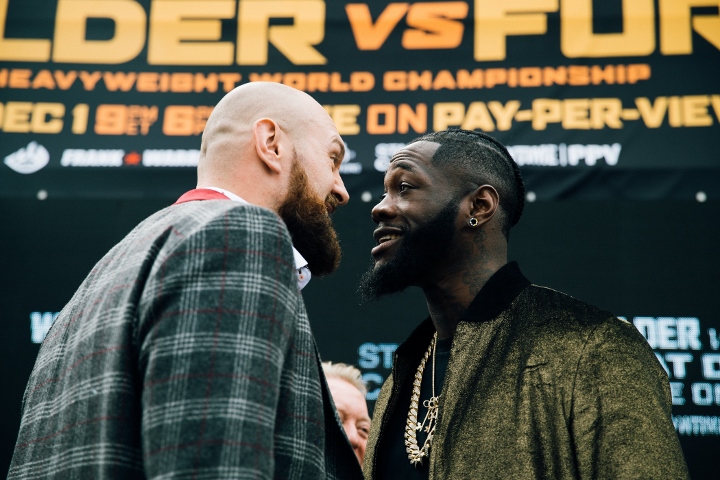 “Listen, it’s nothing against him,” Hearn explained. “I absolutely admire Tyson Fury for what he’s done. … This is a guy who had major problems and has completely turned his life around. And I have the utmost respect for him. He’s not match sharp, he’s not match fit and I think Wilder hits too hard. And I think he’ll cut him up at some point.

“Don’t get me wrong – Fury’s gonna frustrate him, grab him, hold him, spin him, push him away, do it again. And [Wilder] may be behind after a couple of rounds. But eventually, he’ll get a hold of him. And when he does, I think he’ll win the fight.”

Fury relinquished the IBF, IBO, WBA and WBO heavyweight titles two years ago without giving Klitschko the immediate rematch he was contractually owed. Understandably, a depressed Fury instead sought treatment for alcoholism and cocaine addiction.

Wilder will end nearly a nine-month layoff when he faces Fury. The knockout artist from Tuscaloosa, Alabama, knocked out Luis Ortiz (29-1, 25 KOs, 2 NC) in the 10th round of his last fight, a dangerous optional title defense in which Wilder had to overcome severe trouble late in the seventh round to win March 3 at Barclays Center in Brooklyn.

Sure is but to be ranked first in doping in Olympics by a wide margin and be funded by the soviet gov to dope in Olympic games says much more. Would be nice to see povetkin vs Ortiz go at…

[QUOTE=JpnBoxingClinic;19296885]Cuba is also known for their boxing program. Russia known for... Sad to say doping.[/QUOTE] Sad to say boxing is known for PED use and corruption.

[QUOTE=JpnBoxingClinic;19296880]Ortiz was caught for using banned substance but as a country Russia was all in with doping at that time. Big difference.[/QUOTE] What's your point? We're not comparing Cuba to Russia. Ortiz and Povetkin are both PED cheats how is…

Cuba is also known for their boxing program. Russia known for... Sad to say doping.

[QUOTE=Jax teller;19296698]Lol Ortiz is a PED cheat as well caught for real steroids, (nandrolone) when he was looking any good then he got caught and fought the likes of Allen and Scott and looked crap, wonder why.[/QUOTE] Ortiz was caught…