Hearn is "Very, Very Confident" Fury-Joshua Will Happen in 2021

"I think it's a wonderful fight and I'm very, very confident that you will see one or two of those in 2021 and we're working hard to deliver that," Hearn said to IFL TV.

Fury is contracted to have a trilogy fight with Deontay Wilder in the fall, with Joshua expected to make a mandatory defense against the IBF's number one contender Kubrat Pulev. 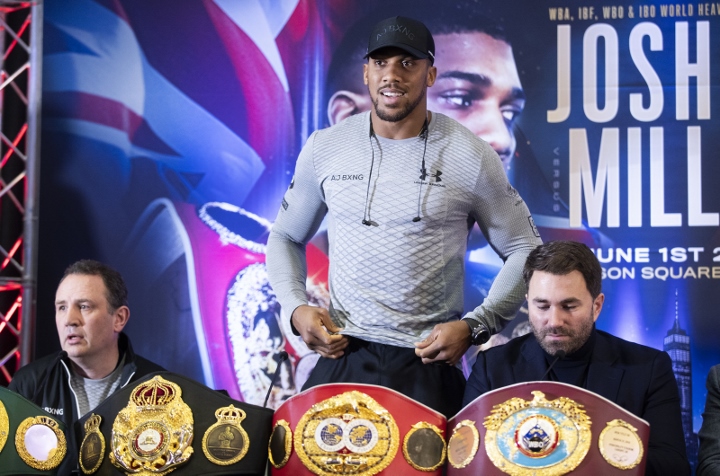 As Hearn previously stated, he is not convinced that Wilder will be physically ready to face Fury in the fall. Wilder has surgery on his left bicep a few months ago.

Hearn also works with Dillian Whyte, who is the mandatory challenger to Fury's title.

And if Wilder is unable to fight, then Hearn believes the WBC should force a Fury-Whyte clash by the end of the year.

Because of the numerous puzzles pieces, it may be difficult to have Joshua and Fury fight each other in back to back fashion. An agreement to have Joshua vs. Fury would likely require an immediate rematch clause for both boxers.

"Back-to-back? Yes. But you've got all sorts of problems, you've got the Deontay Wilder problem, Dillian (Whyte) is the mandatory for Fury too. When we see them will be interesting. I'm not sure Wilder will be ready this year so I'd like to see Dillian jump in and fight Fury at the end of this year," Hearn said.

"If Wilder's not ready it should 100 percent be made by the WBC. People want to see Fury versus Joshua. One of the biggest fights in boxing history. But we can not ignore that Dillian Whyte has been treated unfairly by the WBC and he must get his shot before February 2021."

[QUOTE=Akutalee;20592136]I will only believe this when the fight get made simple[/QUOTE]I genuinely think both Fury and Joshua want the fight .If thats the case things more than likely will start moving if both win their next fight.

Hearn is so full of crap, about 2% of what comes out of his mouth you can believe. Try beating Pulev first, which is a big "if"...

I will only believe this when the fight get made simple

I think the fight will happen.To much money and legacy and public clamour on the line for the fight not to go ahead in 2021.Only thing that can possibly derail it is obviously if Fury looses to Wilder at the…