Hearn: There Is No DAZN Situation; Meeting Friday To Discuss Upcoming Schedule

Eddie Hearn has acknowledged that the days of completely overpaying prominent boxers just to get them to fight on DAZN probably are long gone.

The British promoter still thinks the streaming service’s imminent demise has been greatly exaggerated. When asked about “the DAZN situation” while conducting an Instagram Live chat Tuesday, Hearn revealed that there is a plan in place to start discussing fights DAZN will schedule or reschedule.

“There is no DAZN situation,” Hearn said. “You know, every time I post, I’ve got a million bots that go, ‘Oh yeah, DAZN’s gone broke. DAZN, this and that.’ Just wait and see. We’ve got a meeting on Friday to discuss the schedule coming up.” 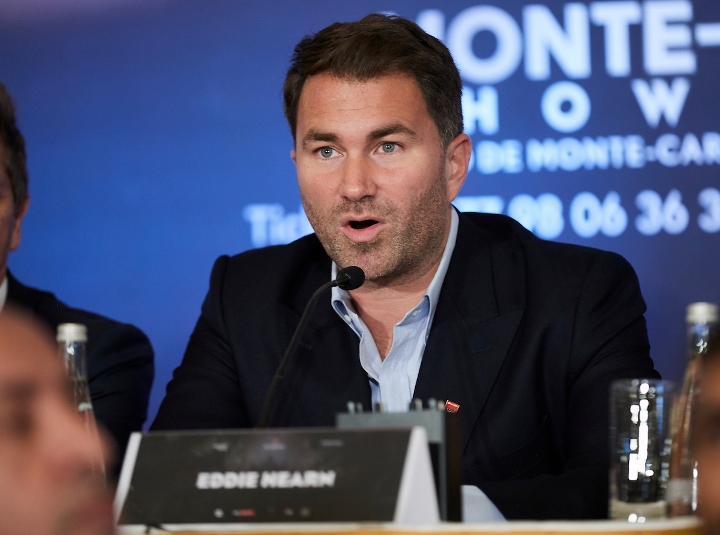 The COVID-19 pandemic has brought the boxing business to a standstill for the past 2½ months, which has limited the content DAZN can provide to its subscribers. DAZN also furloughed a significant portion of its 2,700-person worldwide workforce in April.

The Financial Times reported Tuesday that Len Blavatnik, the Ukrainian-born billionaire who owns DAZN, is seeking investors to secure the company’s financial future. According to the Financial Times, Blavatnik is open to selling DAZN outright, though he would rather offer an equity stake in the company to an interested party.

DAZN, which entered the boxing business two years ago, made an immediate impact in the sport by signing such established stars as Canelo Alvarez and Gennadiy Golovkin to long-term, nine-figure contracts. The company ultimately wants to bid on rights to prominent sports leagues in the United States, but its momentum has been slowed by the devastating economic impact of the coronavirus.

“It ain’t ideal times for anybody,” said Hearn, whose company co-promotes Golovkin and promotes British superstar Anthony Joshua. “I mean, if you’ve got a subscription company that thrives off live sport, and there’s been no live sport, it’s obviously not the best. But we’re cracking on, mate.”

When another chat participant stated later that “they’re clowning DAZN for being bankrupt,” Hearn replied, “I think Mr. Blavatnik is gonna be just fine.”

[QUOTE=patron;20582126]The forum’s financial consultants are at it again. Y’all hit me up I need advice on securing my retirement pension![/QUOTE] The problem with that is the ones doing it are the detractors who are mainly the PBC crew who are…

[QUOTE=Oldskoolg;20584115]That’s why it’s ridiculous for dazn militants in the uk to tell People in the USA that dazn also offers darts, soccer, and snooker....[/QUOTE] Very late on this, but what the hell is snooker?

[QUOTE=R.KHLMS4LIFE;20588767]If i was dazn i would to boost subscriptions and honesty intrigue and profits realocate the spending chill on overpaying boxers on dazn for the rate they paying boxers mikey garcia 7m they could pay em 3.5m put the rest…

If i was dazn i would to boost subscriptions and honesty intrigue and profits realocate the spending chill on overpaying boxers on dazn for the rate they paying boxers mikey garcia 7m they could pay em 3.5m put the rest…