Eddie Hearn insists that Andy Ruiz had signed for his rematch with Anthony Joshua, which will take place in Saudi Arabia on December 7.

Hearn scoffed at rumours circling on social media that Ruiz might not agree to go to the Middle East to defend the WBA, WBO, IBO and IBF heavyweight belts that he won from Joshua in New York in June.

“Despite what I have read, both fighters have signed for this rematch fight,” Hearn said. “All the governing bodies have been told and it has been confirmed by both sides the dates and venue for this event.” 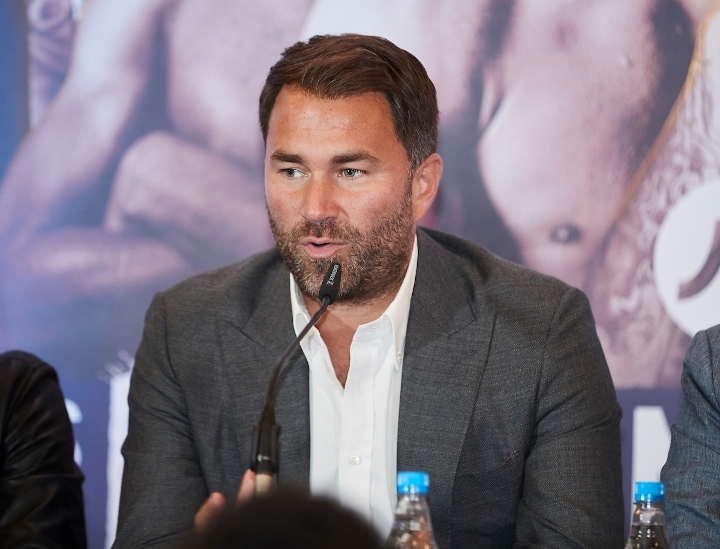 A press tour is planned for the first week of September, with stops in Saudi Arabia, London and New York.

The fight will take place in a specially constructed stadium in Dariyah, on the outskirts on Riyadh, the Saudi capital. The plan is for the venue to have a capacity of 12,000, although this could be enlarged, according to Hearn.

After the World Boxing Super Series final between Callum Smith and George Groves was held in Jeddah last year, the same location as Amir Khan’s bout with Billy Dib, Hearn claims that the country has a plan to grow the sport, one of the reasons it was chosen ahead of other possible sights in the Middle East.

“We had approaches from Saudi Arabia, from Dubai, from Qatar and from Abu Dhabi,” Hearn said at a press conference at The Savoy in London.

“There has been numerous conversations in the past about staging events in that region. We wanted to go for us to somewhere who believed in the sport of boxing, [somewhere] that had a vision.

“I was lucky enough to attend the World Boxing Super Series in Saudi Arabia, which was a fantastic event - not just because of the logistical set up but because of the vibrancy of the crowd and the interest in the sport of boxing.

“For me this event could change boxing forever because if Saudi Arabia are going to invest in these type of fights, with the population they have, you could be seeing a big change in the dynamics of the sport, and that is something that really truly excites me.”

Hearn dismissed suggestions that women would not be allowed to attend the event, saying that anyone who bought a ticket online would automatically be granted a 30-day visa into the country.

He said the start time would be “9-9.30” in the UK, meaning a post-midnight start for the locals and a 1-1.30pm first bell for fans in Ruiz’s home state of California.

“If you making the trip it is going to be an incredible experience for fight fans as well,” Hearn said. “There will be events and music festivals around the event itself. This is such a huge occasion for boxing, an iconic moment for boxing. And with the response we have seen - mainly good, some negative - I guarantee you, with curiosity, the whole world will be watching this fight.”

Lol, the first fight had a greater impact on boxing than the rematch can hope to have.

[QUOTE=BangEM;20024179]You ought to be the last person to call anyone "dumb shi..tt" when you live in a dumpster shi..thole like Philadelphia. LMAO. AJ isn't signed to DAZN USA and he doesn't owe you yanks anything. If you don't watch the…

[QUOTE=BangEM;20023766]No one gives a shii.tt about your fake bum-touching football apart from Americans. The first one happened during the finals of one of the proper football's biggest competitions and people still watched it in Europe. And DAZN mostly care about…

[QUOTE=SchoolTheseCats;20024013]It’s called dazn USA for a reason you dumb $h1t...... and you scrolling through old a$$ articles to finally respond, you need a life or new hobby[/QUOTE] You ought to be the last person to call anyone "dumb shi..tt" when…

[QUOTE=BangEM;20023766]No one gives a shii.tt about your fake bum-touching football apart from Americans. The first one happened during the finals of one of the proper football's biggest competitions and people still watched it in Europe. And DAZN mostly care about…