Promoter Eddie Hearn has a busy end to 2018, with shows in America, the UK and Monte Carlo.

But he said he won’t be the one putting on Chris Eubank Jr-James DeGale [It’s not our fight”] if it happens and added that Kell Brook might be prepared to wait to fight again in February, providing Amir Khan is in the opposite corner. Khan has already stated that he wants to fight early next year.

He is also speaking to Tom Loeffler about Gennady Golovkin and Golden Boy [“they’re just collating offers”] for Saul Alvarez. 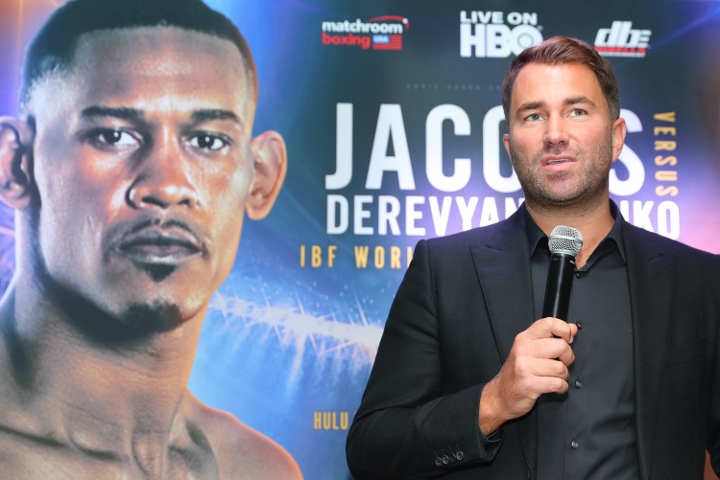 He also has Danny Jacobs, who has his fight with Sergiy Derevyanchenko on October 27.

“It’s his last fight for HBO unless they can deliver him the Canelo fight,” said Hearn.

Then, of the network’s boxing demise, he said: “I thought they would go one of two ways, which is stand up and fight or get out. I was quite surprised when they got out. I don’t think they’ll be out completely. I think they’ll try to stay in the Canelo business and maybe the big-fight pay-per-view business, but the problem is unless you have the appetite to fight and dig into your pockets you might as well leave right now because it’s gone completely crackers. The market in America has gone completely berserk and it’s going to be really difficult for people to survive, unless they have the deep pockets and the brains.”

Was he the catalyst, announcing his billion-dollar DAZN deal? Would it have been like this had he not shown his hand?

“Of course,” he went on. “Fighters in America are drastically overpaid because what they’re generating commercially, it doesn’t stack up to the numbers of the purses. But there’s never been a better time to be a fighter, that’s for sure.”

he's not wrong if he has the numbers to back it up. everyone thinks that just because the sport is super hard and you risk injury that you should be able to ask for whatever you want. the reality is…

It's an outdated business model for sure. In the past it was the boxing programming that was help driving up the subscriptions for HBO. That's why they were overpaying the Mike Tyson's, the Larry Holmes', the Lennox Lewis' and the…

Yeah Eddie, it’s the fighters that are overpaid. The guys that are literally risking their lives to put money in your pocket. THEY are the ones who are overpaid.

[QUOTE=Eff Pandas;19165953]Well the fight of Jacobs' that did the highest ratings was his last fight vs Maciej Sulecki who I doubt alot of hardcore fans care about or even knew who he was/is so it would seem like its increased.…

[QUOTE=Eff Pandas;19165992]LOL yea I think that got brought up early on in the seach for US talent so its even odder he's talking how he's talking now with these remarks. I think people who are suggesting he doesn't truly have…