Hearn: The Most Intense Weigh-In I've Seen Joshua In, Pulev Goaded Him

Things got very tense of Friday, when heavyweights Anthony Joshua and Kubrat Pulev stepped on the scale at the official weigh-in.

Joshua will defend the WBO, IBO, IBF, WBA titles against Pulev on Saturday night at the SSE Arena at Wembley.

Pulev began to taunt Joshua, who got right in the challenger's face and they had to be pulled apart by security.

"Olympic champion, world champion. I respect him so much, but I'm a better boxer and tomorrow I show him," Pulev said to Sky Sports. "That's what I tell him, 'Because I'm amazing'. I think he didn't like that.

"This is not my motivation, but I just wanted to tell him, because I'm much better than him and I'm amazing. Amazing boxing, amazing style, I'll show the whole world tomorrow that I am much better than him. That's it, easy. I don't hate him, or something bad, no. I tell him three times, four times, five times, I respect him. Yesterday he said he was hungry. This is not true. He don't need to fight with me, but I respect that he takes this fight." 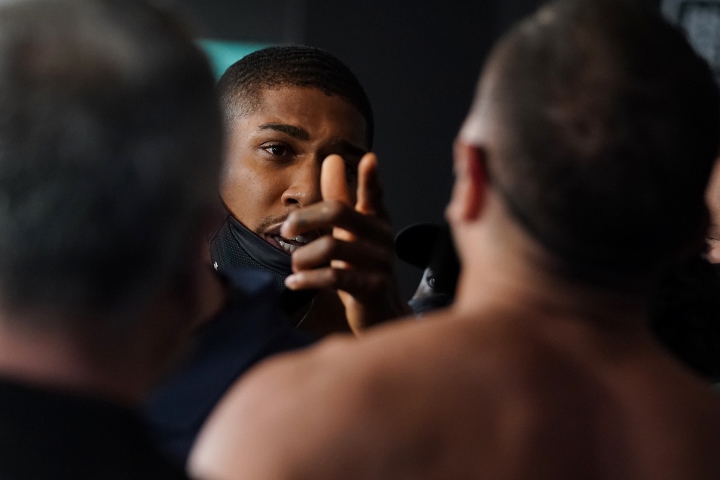 Eddie Hearn, the promoter of Joshua, had never seen his boxer get so fired up at a weigh-in ceremony.

"That was probably the most intense weigh-in I've seen in Anthony Joshua's career so far," Hearn said.

"Pulev was goading him while he walked up the stairs, goading him from the scales. He just reacted and he was ready to go right there. Both guys in great shape, both guys came in optimal weight. You have a classic heavyweight world championship fight tomorrow night and now with even more spite, even more importance.

"It was cold. Sometimes you drag a fighter off the scales and they are shaking from a head-to-head with adrenaline. This was cold. Pulev kept saying to him, 'I'm better than you, I will show you tomorrow night.' AJ didn't like it, he wanted to say his bit back and he said, 'Tomorrow night I'll humble you and I will knock you out.'"

Joshua will knock Pulev out inside 8 rounds.

(Translation) Hearns: The most intense Weigh-in I have choreographed for AJ since AJ vs Ruiz II.

Pulev did what he had to do, in order to give himself a small advantage in the fight. I think Pulev largely succeeded. If he didn't, Joshua would not respond in the way that he has. Whether this is enough…