Hearn: Many People Believe, And I Agree, That Jacobs Beat GGG!

Daniel Jacobs meets Sergiy Derevyanchenko inside the Theater at Madison Square Garden, with the winner taking the IBF's vacant version of the 160-pound title.

There's been a flurry of changes within the division lately, with Alvarez owning half of the four major titles after edging longtime champion Golovkin last month in their rematch. Demetrius Andrade won the other belt last week, and Jacobs (34-2, 29 KOs) can put his name on the list of champions.

The 31-year-old from Brooklyn fell just short last year against Golovkin, who hasn't announced plans for his return from his first loss. And Jacobs would love a first chance at Alvarez, who is challenging for a 168-pound title in his next fight but is expected to return to middleweight afterward. 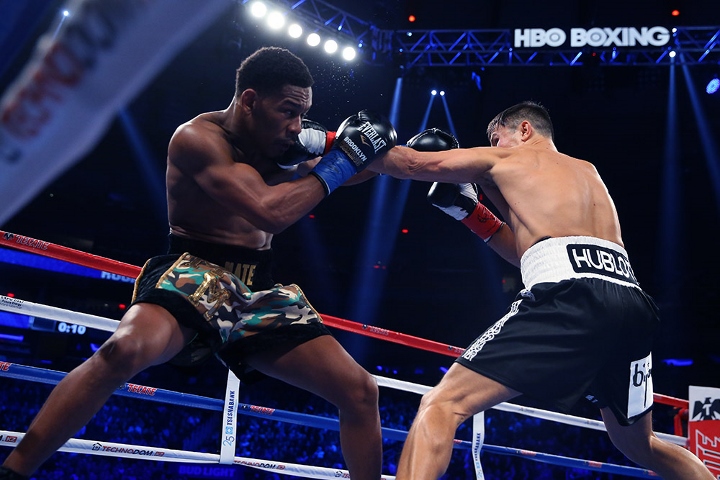 "Many believe and I'm one of them that he beat Gennady Golovkin in this building, and if that's the case I believe you have every right to call him the best middleweight in the world," said Eddie Hearn, Jacobs' promoter.

"But on Saturday he has a chance to do that and to move forward to those super fights, those other defining fights that could be out there: a Golovkin rematch, a Canelo fight, a unification fight with Andrade. These are the nights that lay ahead for Danny Jacobs and I know what it means to him to be victorious on Saturday night."

It would mean getting by an opponent he knows well. Jacobs and Derevyanchenko (12-0, 10 KOs) have sparred together and both trained under Andre Rozier, who will remain with Jacobs for the HBO-televised bout. Gary Stark Sr., whom Jacobs has also worked with, is training the Ukrainian for the fight.

"So to see these guys on the opposite side of the ring come fight night, it's going to be bittersweet," Jacobs said. "We all knew each other for a very, very long time, so it's almost as if we're like family. But this is why we do it, for the love of the sport."

[QUOTE=Chrismart;19230023]It was a competitive but clear win for Golovkin.[/QUOTE] the winner is the guy who could not get his game going, and got his face all lumped up no, wait..... that sounds fkn retarded :lol1: the winner is obviously the…

[QUOTE=el***;19229973]You go pay for one of my helicopter fuel bills and come back to me. You think gas for helicopter is cheap? Especially when I **** college girls up there in the sky for hours and have to pay the…

It was a competitive but clear win for Golovkin.

[QUOTE=Noelanthony;19227106]You would have died with cheap Gucci flip flops on. If you were rich you would have invested in Louis Vuitton flip flops. There is nothing worse than a rich cheap B#astard🤦*♂️[/QUOTE] You go pay for one of my helicopter…