Hearn: Joshua Would Have No Problem Fighting at 'Fight Camp'

IBF, WBA, IBO, WBO heavyweight champion Anthony Joshua is willing to fight wherever possible, according to his promoter Eddie Hearn.

Joshua has been out of the ring since regaining his world titles with a dominant twelve round unanimous decision over Andy Ruiz in their December rematch in Saudi Arabia. 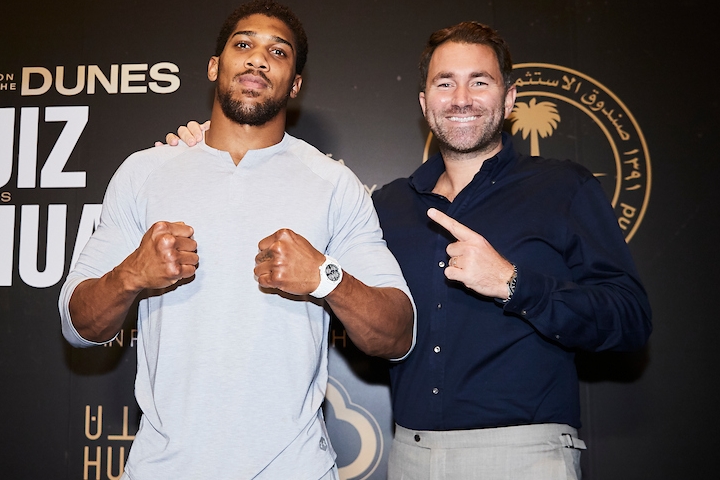 Later today, Hearn will stage the first card of his Fight Camp series, which is taking place on the grounds of the Matchroom headquarters in Brentwood.

"Joshua would fight here, no problem," Hearn said to BBC. "If we were faced with the option of having no fans for an Anthony Joshua fight, we would still look to go ahead. He's spent a lot of time training out here in this garden so he would have no problem fighting here himself.

"He was here a couple of weeks ago. He loves to fight, to box and it's not just about fighting in a huge arena - Wembley Stadium, Madison Square Garden - it's about boxing. We want him to be in front of crowds. But for his career, for his development, he needs to fight this year."

Joshua is contracted to make a mandatory defense against the IBF's top man, Kubrat Pulev.

The fight was initially scheduled for June and then pushed back due to the coronavirus pandemic.

As BoxingScene.com reported, Hearn is targeting the month of December to stage that fight - hoping that some sort of crowd will be allowed for the event.

"Of course fighters want to earn as much money as possible but they also need to develop as fighters and I think the Kubrat Pulev fight is a good, solid, tough fight for him and I am almost certain you will see that fight this year. He wants to improve as a fighter and he will do it anywhere, anytime," Hearn said.

Joshua is heard to be said: “Show them where it hurts. “Abstain from spending your money in their shops and economies, and invest in black-owned businesses.” So surely this means abstain from buying Joshua’s PPV altogether now as the money…

[QUOTE=Bunch Pag;20684260]When Hearn first came up with the idea of pitching a gazebo up on his garden I remember him saying back then that AJ wouldn't have problems fighting in his garden.. there was no fights organised, no talk of…

[QUOTE=Cool Scant;20684403]You still mad at AJs BLM speech lol I’m not a big A$$ Juice fan but you know he didn’t say all white people are racist.[/QUOTE] Racists know that, they don’t care, any time a person of African origin…

[QUOTE=James Hunt;20684150]Then why is he constantly postponing his Pulev fight, hoping he can squeeze some gate money from people he considers racists?[/QUOTE] You still mad at AJs BLM speech lol I’m not a big A$$ Juice fan but you know…

When Hearn first came up with the idea of pitching a gazebo up on his garden I remember him saying back then that AJ wouldn't have problems fighting in his garden.. there was no fights organised, no talk of who…