Hearn: Fury Will Not Walk Joshua Down Like He Did Wilder!

Last Saturday night at the MGM Grand in Las Vegas, Fury stopped undefeated Deontay Wilder in the seventh round to capture the WBC heavyweight title.

Now the biggest fight in the weight class is a unification between Fury and Joshua. 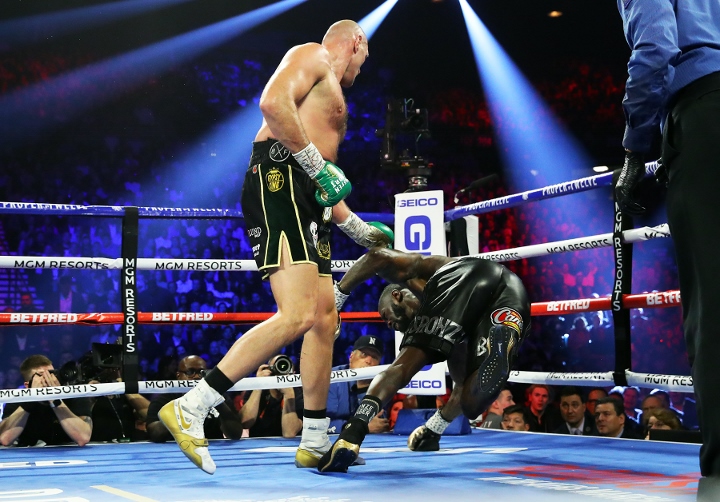 Joshua will first make a mandatory defense against Kubrat Pulev in June.

And Fury has to take part in a trilogy fight with Wilder, who plans to exercise a contractual clause for an immediate rematch.

Should both boxers win, Hearn will push to make a fight between them.

He believes Joshua has the necessary tools to overcome Fury's awkward boxing style.

“You know what he’s going to do; you know he’s got the ability to do whatever he wants. He won’t walk Joshua down like he did to Wilder, he won’t. Joshua’s too strong, he’s too sharp and he’s too good. [Joshua is] not just waiting for this big right hand over the top.

“He’s got left hooks, he’s got uppercuts, he can fight to the body, he can fight on the inside, he can fight long. And Fury knows that, Fury will fight the fight against AJ that he boxed against Wladimir Klitschko. I don’t believe AJ loses that fight but right now, the bookmakers say AJ is the underdog in that fight and I love it.

“I’d rather be the underdog in that fight because when he wins he’s going to get all the credit in the world. It’s the first time he’s been the underdog in a fight in his whole career. The Andy Ruiz rematch, even the Wladimir Klitschko fight, he was a slight narrow favorite in the fight. Now he’s got that underdog mentality, he loves it, he wants this fight bad, and we’ll get it, 100 percent.”

Stop the BS Hearn. AJ was still the favorite in the Ruiz rematch

Joshua-Fury is a different match from Wilder all together. Joshua will give Fury more problems and issues to contend with than the one-dimensional Wilder

[QUOTE=BillyBoxing;20429239]That's why you can get out of it because not everything is signed. Hearn milking Josh, he doesn't trust him when it comes to Fury and DW, especially after this panic attack TKO loss. [B][I]They seemed again really eager to…

[QUOTE=BIGPOPPAPUMP;20428084]Eddie Hearn, promoter for IBF, IBO, WBA, WBO heavyweight champion Anthony Joshua, strongly believes Tyson Fury will have a very tough time with AJ. [/QUOTE] Says the guy who told us Wilder will beat Fury and that he had "news…