It’s been 13 months since HBO decided to move away from boxing, and two things remain true. HBO still doesn’t do boxing, and Larry Merchant is still making astute observations.

Yes, it’s been a little more than a year since HBO decided to throw in the towel, announcing on Sept. 27, 2018 that it was essentially retiring from the sport, like a fighter electing to move on and dedicate his life to other passions.

A network once associated with the best fighters and matchups had abruptly walked away, leaving its devoted fans in a lurch.

But did it leave the business reeling as well?

Did a network that was so synonymous with big fights harm the sport by leaving it? Was it a death knell?

Merchant, the delightfully irascible longtime commentator at HBO who once threatened to kick the ass of Floyd Mayweather Jr. following a fight for slighting him, demurred when he was asked if the sport misses the former “Heart & Soul of Boxing.”

“I think the sport has done very well without HBO,” Merchant told BoxingScene in a phone interview on Tuesday. “It’s having a terrific run now of big fights (with) ESPN, Fox and DAZN, and there’s a lot of money being poured into the sport. They’re using it for marketing and paying — some will say overpaying fighters — and making big fights. Just look at the fights we’ve had in the last three or four months.”

While the sport has managed fine without HBO’s once critical presence, the network doesn’t seem to have any misgivings about its decision.

HBO still doesn’t have any plans to do live boxing, Peter Nelson, the Executive Vice President of HBO Sports, told BoxingScene.com in a statement on Wednesday. But it hasn’t left the sport completely, either. The network recently aired a two-part documentary on Muhammad Ali that was executive produced by LeBron James and Maverick Carter and directed by Antoine Fuqua.

Said Nelson to BoxingScene, “Our decision led to a broadening of our programming slate: documentaries like Diego Maradona by Academy Award-winner Asif Kapadia, our pioneering show 24/7 reimagined for top programs in college football, and top sports personalities of today expressing their voices on our platform like LeBron James, Serena Williams, and Lindsey Vonn. Our mission is to tell the best stories in sports, and boxing is welcomed in that. While we have no plans to air a live boxing bout, we remain proud of our place in boxing’s heritage, with live productions having spanned 45 years of its past glory. That said, we now look to the future.” 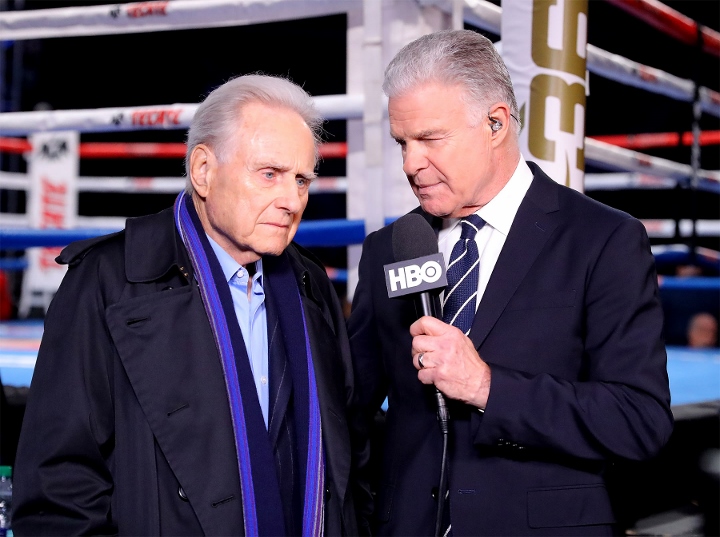 Sitting on a park bench overlooking the ocean in Santa Monica, the now retired Merchant, still scrappy and hyper perceptive at age 88, was once again giving his opinion on a sport he observed ringside for 35 years at HBO.

He doesn’t think it’s a coincidence that HBO’s decision to leave hastened and may have even accelerated the arrival and commitment of other networks and streaming services to the sport.

“Maybe because they left the field that others jumped in, to fill the vacuum but they’ve jumped in with both feet and both fists,” Merchant said. “The new owners of HBO didn’t have a passion for it. And I don’t even think I realized how much of a pop cultural phenomenon it was when it stopped. People could hardly believe their ears and eyes.”

Merchant was no longer part of HBO’s announcing crew when they got out of boxing. He called his last fight for HBO on Dec. 15 of 2012, Nonito Donaire’s third-round knockout of Jorge Arce, who coincidentally announced his retirement afterward. But he still remembers exactly how he felt when he got wind of the announcement.

“It was a visceral shot to my stomach when they dropped it,” he said, “but if you care about boxing, there’s plenty of places to find it right now.”

Not long before HBO’s announcement, the streaming service DAZN signed a mammoth deal with Matchroom promoter Eddie Hearn and has emerged as a new pillar of the industry.

In August of 2018, ESPN struck a lucrative deal with Top Rank and its stable of fighters to air cards on its various platforms. Also in September of 2018, Al Haymon’s Premier Boxing Champions lineup signed a deal with Fox Sports, not to mention PBC's multi-year deal with Showtime, which continues it's longtime existing presence as another big-time boxing provider.

“The game is having a terrific run right this moment,” said Merchant, who plans to attend Canelo Alvarez’s light heavyweight title bout with Sergio Kovalev on Nov. 2. “I don’t know how long it lasts, but I think in general the commitment from the people behind DAZN — they have recognized the international appeal of the big boxing event. Just as HBO outwitted and outspent the old networks and seized control and showed there’s still an audience of the thrills and spills and drama of boxing, someone else has come along to reenergize it.”

And just as different art forms seem to reinvent themselves, Merchant sees traces of boxing’s adaptive spirit in the current imagining of the sport.

“It’s like ‘Hamilton’ energized Broadway and brought back Broadway in a way,” Merchant said. “Broadway like boxing is an old time, popular art form and despite social media, despite other forms of communication, Broadway is, as they used to say, pronounced dead quite often and somehow it sits up and says, ‘Hey, I’m still here.’ They’ve reconfigured what they do, what the public wants, and I think that now in an unconscious way, I think boxing has done the same thing.”

And how will HBO Boxing be remembered? Merchant went to one of his trademark pauses to find the right words.

“I think HBO made breakthroughs on every level of what they were doing, whether it was dramas with ‘The Sopranos’ and ‘The Wire,’ and then ‘Game of Thrones,’ whether it was concerts that they used to show all the time, being able to be more real about what’s going on than the networks were willing to do at the time,” he said. “And yes, I think we presented it as a theater, as I used to call it, the theater of the unexpected, and I think that they’re attempting to do the same things on the new platforms and take it even farther.”

“I think that the good things we did that others have followed — that’s the best to me, the best way to remember HBO.”