David Haye expected more from Oleksandr Usyk in his first fight at heavyweight after unifying the IBF, WBA, WBC and WBO cruiserweight titles.

Usyk beat Chazz Witherspoon by technical knockout after the seventh round, when Witherspoon’s trainer, Tommy Brooks, stopped their fight October 12 in Chicago. The 38-year-old Witherspoon was exhausted when their scheduled 12-round encounter ended, but he took that fight on only four days’ notice because Usyk’s original opponent, Tyrone Spong, failed a performance-enhancing drug test. 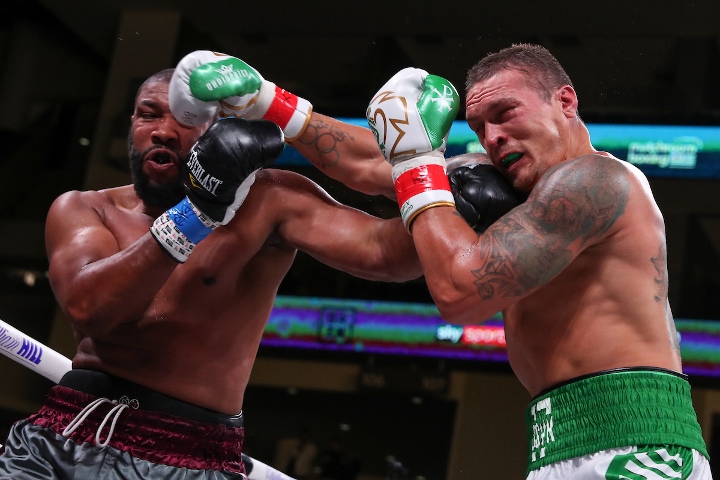 The retired Haye knows the tough task that Usyk undertook last year because Haye is one of only two cruiserweight champions in boxing history, along with Evander Holyfield, to have won heavyweight world titles after moving up. England’s Haye has taken particular interest in Usyk’s heavyweight journey because the unbeaten Ukrainian is scheduled to battle British contender Dereck Chisora, a fighter Haye manages, on May 23 at O2 Arena in London.

“It wasn’t the performance to send shivers down your spine,” Haye told IFL TV regarding Usyk’s performance against Witherspoon. “And if you were looking at him as a future world champion, doing what only myself and Evander Holyfield have done, you know, become number one at cruiserweight and then – world champ at cruiserweight and then world champ at heavyweight, only me and Holyfield have done that. So, if he’s to join that very elite group, that first effort against Witherspoon didn’t look that great. You wouldn’t watch that and think, ‘Yeah, this is the guy who’s gonna beat Fury, who’s gonna beat AJ.’ You didn’t think that. You just thought, ‘Eh, let me see what his next fight is like.’ ”

The Joshua-Pulev fight is tentatively scheduled for June 20 at Tottenham Hotspur Stadium in London. Eddie Hearn, Joshua’s promoter, has said that bout could get pushed back to July 25 to accommodate changes to Tottenham Hotspur’s home soccer schedule caused by the coronavirus pandemic.

I like you haye. But how did you predict wilder would beat fury in rematch? That's like condoning robbery boxing decisions. You 100% should have supported the British boxer to win, to ram home the message that the 1st fight…

[QUOTE=Oshio;20486420]Who were the 3 Chisora lost to? What was their ranking?[/QUOTE] One was for the British title. One was for the European title. And one was for the World title. In that order, shows how f***ed up boxing is that…

[QUOTE=RJJ-94-02=GOAT;20486377]Metaphorically he’s not in the same universe as Holyfield. Haye’s HW run and resume are worthless. His best win was Chisora coming off 3 losses. Say no more...[/QUOTE] Who were the 3 Chisora lost to? What was their ranking?