So what's the latest with IBF, IBO, WBA, WBC middleweight champion Gennady Golovkin (37-0, 33 KOs), who was last seen defending his world titles against Daniel Jacobs on March 18th at the Madison Square Garden in New York?

There has been a lot of talk of him making a homecoming fight in his native Kazakhstan on June date against Billy Joe Saunders (24-0, 12 KOs), who has the last middleweight belt (WBO) not in Golovkin's possession.

"We've been in regular communication with Frank Warren (who promotes Saunders) and just trying to see what's the best way to make that fight happen. So we should know more by next week and I don't know about deadlines with Billy Joe Saunders or Golden Boy saying we can't fight (in June),'' said Tom Loeffler, the managing director of K2 Promotions on Thursday afternoon, where a media luncheon was held at the Palm Restaurant in downtown Los Angeles for WBO cruiserweight belt-holder, Oleksandr Usyk. 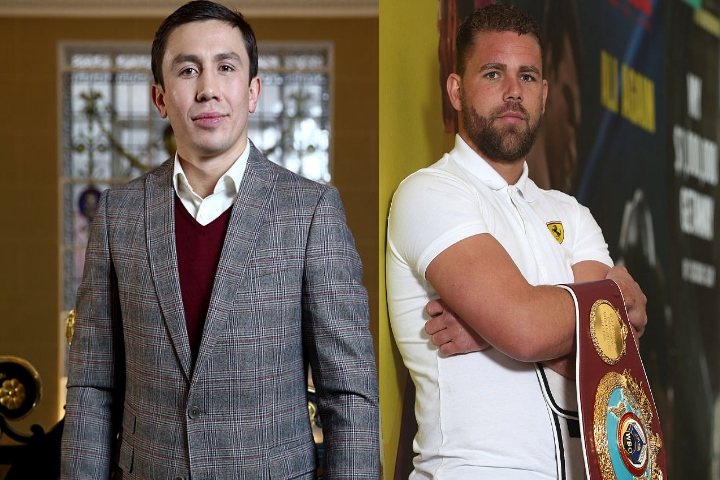 Saunders, has made comments that Golovkin would have till this upcoming Friday to make the deal or he'd move on.

"Again, it's been Gennady's goal to unify all the belts. We've been in discussions with Frank for awhile now to see if there's a way to make the fight work and if there's a way - we're going to put that together," explained Loeffler.

When asked how close the Saunders bout is to coming to fruition, Loeffler answered:

Oscar De La Hoya, the founder of Golden Boy Promotions, has stated recently that Golovkin fighting in June would jeopardize a possible showdown with their client, Saul 'Canelo' Alvarez, in September. Alvarez is currently scheduled to face Julio Cesar Chavez Jr. on May 6th.

"I've been in discussion with Eric Gomez at Golden Boy and they have the fight coming up with Chavez which I think will be a tough fight but there's no artificial deadline there," Loeffler told BoxingScene.com.

"I do know that if we make the fight (with Alvarez) the sooner the better, rather than dragging it out, just depending on what happens in May."

Loeffler said absolutely nothing in that " [I]update[/I] "..... and now, we know why...... * sings * why you always lyyyyyyyyyyyyyyyyyyyyying

[QUOTE=Bronx2245;17555643]Why is Loeffler worried about "what's best for the UK?" The man wants to make history in front of his countrymen. Can't K2 even make that happen? This deal should've been signed the week after the Jacobs fight![/QUOTE] Just take…

TEAM GGG- "it's funny how guys only call out Golovkin when he already has a fight signed!" ........Golovkin does NOT have a fight signed, and CANELO challenged Golovkin at the full 160 for 3 times his highest purse and a…

Why is Loeffler worried about "what's best for the UK?" The man wants to make history in front of his countrymen. Can't K2 even make that happen? This deal should've been signed the week after the Jacobs fight!

[QUOTE=future hendrixx;17555120]who in the higher divisions would provide ggg with more money and acclaim? ... the answer is nobody. jack, degale, ward, zurdo..who else? those are the only names that stand out. at 160 hes gonna have guys like charlo,…