For the first time since Saul ‘Canelo’ Alvarez filed a multimillion-dollar lawsuit against Golden Boy and DAZN-USA, a response has come from the California-based promotional outfit. A Statement Regarding Arbitration was submitted by Golden Boy on Monday, within the deadline imposed by the Hon. Judge Percy Anderson.

The contention on the part of the promoter is that the current claims made by Alvarez and SA Holiday Inc. are grounds for arbitration per the terms of the existing promotional contract from October 10, 2018. The date marks the starting point for Alvarez’s tour with sports streaming service DAZN-USA, complete with a record-breaking 11-fight, $365 million agreement.

“Plaintiffs and Golden Boy are parties to the Promotional Contract,” argues Ricardo Cestero of Greenberg, Glusker, Fields, Claman and Machtinger LLP, on behalf of Golden Boy and de la Hoya in a seven-page Statement Regarding Arbitration—a copy of which has been obtained by BoxingScene.com. “The arbitration clause in that agreement is broad, covering “[a]ny claim, controversy or dispute arising out of or related to this agreement. 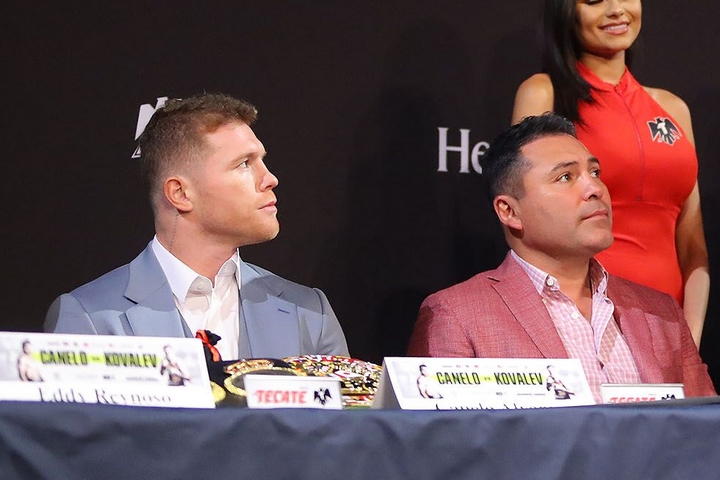 Existing contracts between Golden Boy and DAZN, and Alvarez and Golden Boy have also been filed with the U.S. District Court for the Central District of California. Both were filed as sealed documents due to exisitng confidentiality clauses.

Guadalajara’s Alvarez (53-1-2, 36KOs) first launched the lawsuit on September 8, seeking damages of at least $280 million—the amount remaining for the eight fights he claims to be owed by Golden Boy and DAZN-USA. Among the nine allegations named in the complaint are: breach of contract; intentional interference with contract; negligent interference with contract; fraud and concealment; and breach of fiduciary duty.

The case was dismissed without prejudice by the Hon. Anderson due to a lack of jurisdiction. Alvarez’s legal team–headed by The Maloney Firm was given until September 26 to file an amended lawsuit, which they did—only to instead take it to Los Angeles Superior Court.

DAZN Media, Inc. responded in kind, filing a Notice of Removal to Federal Court on October 8 in lieu of accepting a receipt of acknowledgement. Their motion was granted on October 9, as the case was placed back in the U.S. District Court, though assigned to a different judge and courthouse.

Alvarez’s attorneys filed a Notice of Related Case(s) on October 13, arguing that their original case and the one filed by DAZN Media Inc. were nearly identical enough to be heard in the same courtroom. Their motion was granted on October 15, one day prior to the Hon. Anderson ordering Golden Boy and DAZN to file contracts and any request for arbitration by no later than close of business on Monday, October 26.

Golden Boy’s legal team came in just before the deadline, requesting the outlet it had sought from the moment Alvarez first filed the original complaint.

“Under the FAA, the court must compel arbitration where, as here, (1) a valid agreement to arbitrate exists and (2) the dispute falls within the scope of that agreement. Here, there is no dispute that the Promotional Contract, which contains the arbitration clause, is valid and enforceable.  Indeed, all of Plaintiffs’ claims depend entirely on the validity of that agreement. There also can be no dispute that the claims pleaded against Golden Boy “aris[e] out of and relat[e] to” the Promotional Contract.  Each claim specifically alleges duties and obligations arising directly out of that agreement.”

Guadalajara’s Alvarez (53-1-2, 36KOs) has not fought since an 11th round knockout of Sergey Kovalev to win a light heavyweight title last November in Las Vegas. He was due to challenge reigning super middleweight titlist Billy Joe Saunders this past May, only for plans to formally announce the event to fall through due to the ongoing coronavirus pandemic.

Efforts to get him back in the ring have produced a drawn-out battle both behind the scenes and in the media. Alvarez was allegedly asked by DAZN-USA to accept a steep paycut for his next ring appearance absent it coming versus an “elite” opponent. Alvarez was willing for a time to fight for less than his contractually guaranteed $35 million per fight, though the two sides far differed on adjusted compensation. From there came the decision to take all involved parties to court.

Golden Boy has remained relatively quiet through the process prior to Monday’s filing which also includes claim of force majeure— unforeseeable circumstances that prevent someone from fulfilling a contract.

“Plaintiffs claim that Defendants DAZN Media Inc., DAZN North America, Inc., DAZN US, LLC and Perform Investment Limited (collectively, “DAZN”) have breached their obligation to pay Golden Boy a license fee for an Alvarez event in 2020,” contends Cestero. “On the other hand, Plaintiffs claim that Golden Boy has failed to fulfill its alleged obligation to pay Alvarez a required fee regardless of DAZN’s actions.  In this way, Plaintiffs have alleged that Golden Boy’s obligations are separate and independent of DAZN’s obligations.  Moreover, the terms of the Promotional Contract and the agreement between DAZN and Golden Boy (the “DAZN Agreement”) are different and give rise to independent claims and defenses.

The hope from there is that the next step taken is for the court to rule in favor of Golden Boy, at least as it relates to its contract with Alvarez.

“In short, Alvarez can identify no legitimate basis on which to refuse to submit its claims against Golden Boy to arbitration. For all the foregoing reasons, Golden Boy intends to enforce its right to arbitration pursuant to paragraph 14.c of the Promotional Contract.”

[QUOTE=lieutenant;20842864]Do you have any sources to prove that Oscar made any such assurance? DAZN signed the GBP and Canelo deal in October, GGG was signed to DAZN 5 months later. I think it's clear DAZN just assumed the fight would…

I dont get it, quit being insecure it's okay to be british

[QUOTE=QballLobo;20842805]DAZN wouldn’t have tried to force a trilogy with GGG if Oscar didn’t give them assurances he could get Canelo to do it. DAZN was negotiating with GGG, he wanted to know if they could deliver a third Canelo fight.…

[QUOTE=QballLobo;20841960]Wrong. Oscar told DAZN he could deliver the third GGG fight so DAZN would give him a deal for his fighters. There was no obligation for Canelo to fight GGG in his deal. When they signed Canelo GGG was a…