Eric Gomez, the president of Golden Boy Promotions, admits to be a bit drained at this point after finally getting the deal for the rematch between unified middleweight champion Gennady Golovkin and Mexican superstar Saul 'Canelo' Alvarez consummated for September 15th in Las Vegas.

"I don't want to say too much but I just want the fans to celebrate that this fight is done. We got it done, the biggest fight in boxing is going to happen, again." 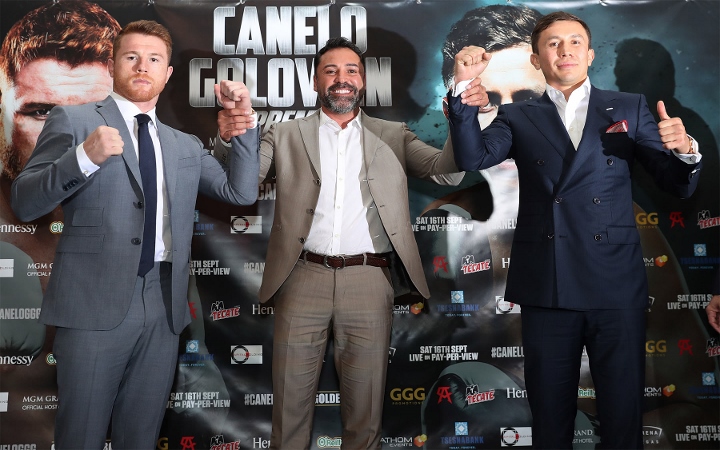 After haggling over percentage splits, Golden Boy Promotions had imposed a noon (PT) deadline for Wednesday for Golovkin to accept a deal that would see him get 42.5-percent of the financial pie for this lucrative rematch. As that time passed, for a short spell it looked like this match-up had flat-lined.

Gomez stated - "It was dead, we were going to move on but Oscar (De La Hoya, the founder of Golden Boy) and I threw a 'Hail Mary' and thankfully Tom (Loeffler of GGG Promotions) caught it."

It's not clear just what this 'Hail Mary' is - and Gomez didn't want to elaborate - but he did mention - "Oscar saved the fight, he made it happen. He's the one who kept pushing for it and he's coming out of pocket here. He should get a lot of credit."

For Gomez, letting this rematch slip away gave him a flashback to a childhood memory.

"I kept thinking back to when I was a kid and Ray Leonard and Marvin Hagler, they had a great fight but they never had a rematch," recalled Gomez of that historic battle that took place in 1987.

"I always wondered how a rematch would go between the two and wanted to see it. So that's what stuck in my mind here."

[QUOTE=TonyGe;18873528]Are you blind? It's obvious Brook is much bigger than Cotto. Personally if Cotto wants to fight at Middle that's his business.[/QUOTE] silly casual fan..... FACT: Brook was a welter his preparation/training/camp..... was SOLELY tailored to 147 he was a…

[QUOTE=TonyGe;18872910]Your two faced and have the morals of a snake. You accused [B]Golovkin of dragging up Brooke[/B] even though he wanted the fight with Golovkin and weighed as much as G when they fought. Cotto only weighted 153 pounds for…

[QUOTE=aboutfkntime;18872884]how did you draw that conclusion, from anything in my post ? fk you're an idiot Cotto was reaching for greatness, he did not have to take that fight at that point in his career..... and Martinez fought Cotto because…