Gervonta Davis: Santa Cruz Throws More Than Me, But I Come To Hit Hard

Gervonta “Tank” Davis knows that he will have to use brute strength to bulldoze his way through Leo Santa Cruz when the two meet Oct. 24 on Showtime pay per view.

Santa Cruz (37-1-1, 19 KOs) has consistently displayed one of the highest punch outputs in the sport year-over-year, and Davis (23-0, 22 KOs) recognizes that in order to remain undefeated, he might need to reach back into his well-regarded bag of knockout tricks.

"He’s coming with his output, a lot of punches, he throws more than me. I’m coming and hit hard. It’s just about who wants it the most, who can dish it out and take it too,” Davis told the Last Stand Podcast with Brian Custer. “I don’t think my power will be too much because he’s a veteran. He’s been in there with guys who had power. It’s about who comes out there and is perfect that night. It will show if my power is too much for him. It might be a short night. It will come down to whoever wants it more.” 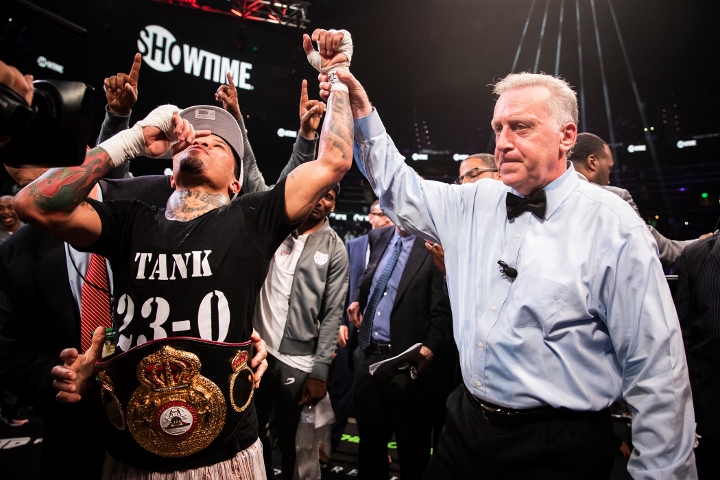 The showdown between the boxers will take place at 130 pounds, a division Davis has long been familiar with. In his last fight against Yuriorkis Gamboa, a 12th round TKO win in December, Davis fought at 135 for the first time.

"I like fighting at 130 because when I’m smaller I think I’m faster, I can throw a lot of punches, I’m stronger,” said Davis. “I feel like at 130 is a weight class where I can become that big star."

The 25-year-old, Baltimore-based fighter said he is doubling down on his experience to escape the pitfalls of a potential lack of conditioning.

"He’s going to come in there and try to pressure me, and he’s going to feel the power and then it’s going to end up being an early night like [Jose] Pedraza because they tried to overpress me, thinking I’m going to get tired when I’m not. He says his experience is going to get him the win. I have experience too. I’ve been fighting since I was seven years old. I know what to do when someone is pressuring me,” said Davis.

“It’s going to be an exciting fight I believe, I cannot wait. Leo is coming to fight and he’s not scared. Both of us are coming to the table with something to prove.”

I think Mayweather is in his ear about not underestimating Cruz and going in there over confident like he can’t be knocked out himself or out worked or taking for granted that his power will overwhelm Cruz. Unlike Broner who…

Massive ask for Santa Cruz, may come unstuck early here. Wouldn't be surprised if he appears old in this fight.

the crowd bood santa cruz at his last fight, he was off it, he's getting KO'ed

I hope it's not too late for this guy, I feel like he's a good guy underneath all this and he has a style the sport has been kind of missing for a while. It's always drama with him so…