Gennady Golovkin is Stripped of The IBF World Title

The IBF stripped Gennady Golovkin of its middleweight title Wednesday.

The Springfield, New Jersey-based sanctioning organization ruled to take Golovkin’s 160-pound championship from him because Golovkin didn’t adhere to the stipulations of the exception the IBF granted before he fought Vanes Martirosyan on May 5 in Carson, California. The IBF didn’t sanction Golovkin-Martirosyan as a title bout, but allowed Golovkin to keep its middleweight title.

As part of that agreement, the IBF ordered Golovkin’s promoter, Tom Loeffler, to begin negotiations with Lou DiBella, the promoter for mandatory challenger Sergiy Derevyanchenko, on May 7. The IBF also stipulated that Golovkin had to make his mandatory defense against Derevyanchenko within 90 days of May 5, or by August 3. 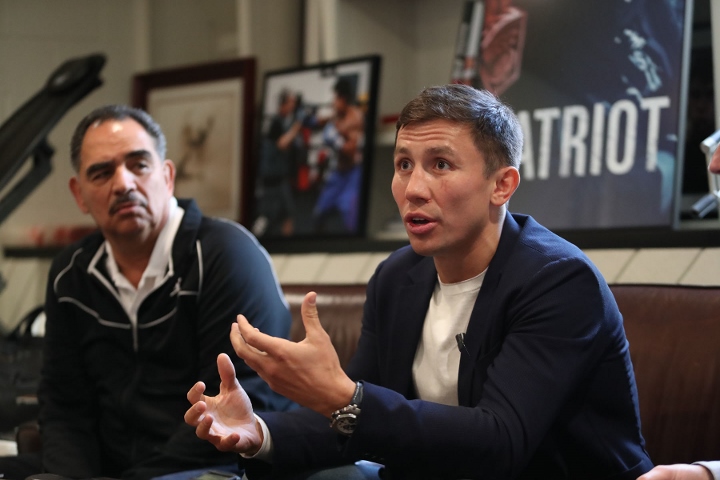 DiBella pushed for the IBF to force Golovkin to make his mandatory defense against Derevyanchenko on May 5, once Canelo Alvarez withdrew from his rematch against Golovkin due to his impending suspension.

Golovkin requested another exception during a hearing with the IBF on May 22 at the Robert Treat Hotel in Newark, New Jersey. Golovkin, who still owns the WBA, WBC and IBO middleweight titles, attended that hearing in part to let the IBF know how important it is to him to keep all the titles he has won in the ring.

The IBF informed the teams of Golovkin and Derevyanchenko of its decision Wednesday afternoon. The IBF had until Wednesday to rule whether Golovkin could move forward with another fight, possibly a lucrative pay-per-view rematch against Alvarez, without having to first make his mandatory defense versus Derevyanchenko.

The IBF is expected to order a bout between the top-ranked Derevyanchenko and the next available contender in its middleweight rankings for its unclaimed 160-pound crown.

The No. 2 spot in its rankings is vacant. Daniel Jacobs is ranked No. 3 by the IBF, but Derevyanchenko and Jacobs are trained by the same man, Andre Rozier.

If Jacobs (34-2, 29 KOs) passes on fighting Derevyanchenko for the IBF’s vacant championship, a fight against Derevyanchenko then would be offered to fourth-ranked Jermall Charlo (27-0, 21 KOs).

The 32-year-old Derevyanchenko is considered a high-risk, low-reward proposition for Golovkin (38-0-1, 34 KOs), particularly at the point in the 36-year-old champion’s career at which he is trying to maximize his earning potential. The unbeaten Ukrainian has limited professional experience (12-0, 10 KOs), but is commonly considered one of the top 10 middleweights in boxing.

For Golovkin, battling Alvarez again isn’t nearly the foregone conclusion it appeared to be when Golovkin attended the IBF’s hearing two weeks ago.

Negotiations between Loeffler and Alvarez’s handlers at Golden Boy Promotions stalled two days later because Golovkin requested more money, a 50-50 split, than he accepted in the initial deal for their rematch. That fight, scheduled for May 5 at T-Mobile Arena in Las Vegas, was canceled because the Nevada State Athletic Commission suspended Alvarez for six months for failing two performance-enhancing drug tests in February.

Oscar De La Hoya, Alvarez’s promoter, told ESPN.com on Tuesday night that he is willing to give Golovkin a 60-40 split to fight Alvarez again September 15 at T-Mobile Arena. The Mexican superstar’s suspension should end after August 17 because it is retroactive to the date of the first of Alvarez’s two positive tests for clenbuterol (February 17).

[QUOTE=aboutfkntime;18856266]Like Ward told Golovkin years ago...... "[I] you can't have this MONSTER reputation, without backing that thing up you got to get in there with a real one, and be everything that you say you are [B]NOT[/B] just once..... but…

Like Ward told Golovkin years ago...... "[I] you can't have this MONSTER reputation, without backing that thing up you got to get in there with a real one, and be everything that you say you are [B]NOT[/B] just once..... but…

[QUOTE=Diegosome1;18856024]Lol do you just copy and paste the same thing over and over? Whatever[/QUOTE] did you read it the first time..... or ? "[I][B][SIZE="4"]We made him an offer, prior quite frankly, to knowing about the fight with Lemieux. But regardless…

[QUOTE=TonyGe;18856005]Take your head out of your ass for a change and do some research. Golovkin stated flat out that the talks with Ward were them talking back and forth and they never got down to serious talks. Anyway [B]Ward would…