Gennadiy Golovkin finally has a date for his mandatory middleweight title defense against Kamil Szeremeta.

Matchroom Boxing, Golovkin’s co-promoter, and Golovkin’s promotional company announced Friday that Golovkin-Szeremeta has been scheduled for December 18. DAZN delayed adding Golovkin’s fight versus Szeremeta to its streaming schedule for a few months, but the 38-year-old Golovkin now knows when he’ll make a mandated defense of the IBF middleweight title he regained by edging Ukraine’s Sergiy Derevyanchenko in October 2019 at Madison Square Garden in New York. 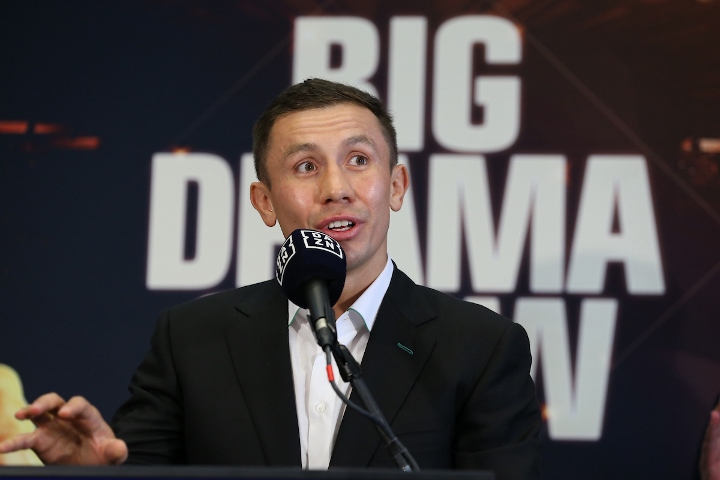 While undefeated, Szeremeta (21-0, 5 KOs) is widely viewed as a huge underdog against even this aged version of the hard-hitting Golovkin (40-1-1, 35 KOs).

Golovkin’s return to the ring was delayed longer than he would’ve preferred, yet this lengthy layoff at least enabled the Kazakh knockout artist to rest and fully recover from his brutal battle versus Derevyanchenko (13-3, 10 KOs). Golovkin defeated Derevyanchenko by unanimous decision in an extremely entertaining slugfest that BoxingScene.com voted its “Fight of the Year” for 2019.

His low-profile fight with Szeremeta will be Golovkin’s third appearance since he signed a six-fight contract with DAZN in March 2019. Golovkin knocked out Toronto’s Steve Rolls (20-1, 11 KOs) in the fourth round of his DAZN debut in June 2019 at Madison Square Garden.

Golovkin’s deal with DAZN reportedly will pay him in excess of $100 million altogether.

He had hoped to face middleweight rival Canelo Alvarez a third time by now, but the Mexican superstar wasn’t willing to fight Golovkin late last year. Alvarez’s refusal to fight him again led Golovkin to battle Derevyanchenko for the then-vacant IBF 160-pound championship that was stripped from Alvarez for his team’s failure to strike a deal with Derevyanchenko, who was the mandatory challenger for Alvarez’s IBF belt.

Alvarez, who beat Golovkin by majority decision in their 12-round rematch two years ago, eventually changed his mind and was willing to partake in a third fight against Golovkin earlier this year. By then, however, Golovkin already was contractually committed to defending his title against Szeremeta.

The 30-year-old Alvarez’s return to DAZN after a legal battle with the streaming service and former promoter Golden Boy could lead to his third fight versus Golovkin finally coming together in 2021. Alvarez (53-1-2, 36 KOs) will to square off against England’s Callum Smith (27-0, 19 KOs) for Smith’s WBA “super” world 168-pound championship in his next fight, on December 19 at the Alamodome in Texas.

[QUOTE=budfr;20910052]Seems you have wet dreams about Canelo....and yes, he is the face of boxing, not GGG. Sure, his stardom will eventually fade, it´s boxing but GGG´s stardom was too short and it´s gone.[/QUOTE] No one has wet dreams over that…

[QUOTE=Sid-Knee;20909465]They have given G his own date. It's the day before Canelo fights. DAZN probably wants as many people to pay for the months subscription as they can get as they don't have that many dates or fights on. So…

[QUOTE=Sid-Knee;20909452]I'm talking about this next fight, not the one against Rollin or whatever the f3ck his name is. So don't be bringing your strawman to me. I can take it or leave it where Golovkin is concerned. But i actually…