Every day spent under the Golden Boy Promotions banner is a reminder that Genaro Gamez is living his childhood dream.

“Oscar de la Hoya was definitely one of my boxing idols growing up,” Gamez (9-0, 6KOs) told BoxingScene.com. “Reading his book motivated me so much as a young boxer. When he signed me to a pro contract, it was a dream come true for my career.

“Fighting for Golden Boy, for one of my idols just motivates me to push myself that much harder as a pro.” 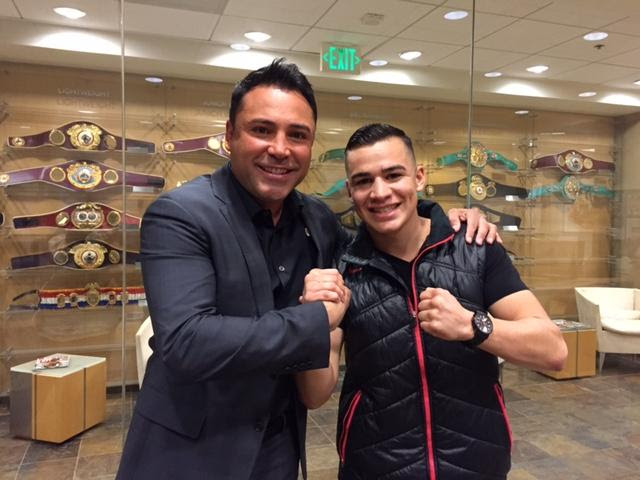 The 24-year old San Diego (Calif.) native figures to be pushed to the limit in his next ring appearance. Awaiting Gamez is Milwaukee (Wisc.)-bred Luis Feliciano in a matchup of unbeaten super lightweights Thursday evening at Fantasy Sports Casino in Indio, Calif.

The scheduled 10-round main event—which will stream live on RingTV.com (Thursday, 10:00pm ET/7:00pm PT)—is a dangerous task both ways, especially for two fighters so early into their respective pro careers. Feliciano (12-0, 8KOs) turned pro in Feb. 2017, while Gamez is only slightly more seasoned at three years into the paid ranks.

“I know I’m young but I feel like I’m ready for big fights,” insists Gamez. “This is the type of fight I’ve been waiting for, a good boxer who’s never lost before and is going to try to take my head off.

“It’s just time to take my career to the next level. I’ve been dreaming my whole life of becoming a world champion so now it’s time to do the work to get there. This is another fight, that next step to get me to that goal.”

Feliciano—Puerto Rico-proud though raised in Milwaukee and now based out of Rancho Cucamonga, Calif.—is coming off of an entertaining 7h round knockout of Mexico’s Fernando Carcamo in his most recent ring appearance this past June. It came on a night when fellow Boricua sluggers Angel Acosta and Alberto Machado both suffered stoppage losses, leaving Feliciano obligated to restore balance in the Puerto Rico vs. Mexico rivalry.

“It’s been a rivalry, but I don’t see this fight like a rivalry between cultures,” notes Gamez. “To me, it’s just two young boxers looking to take their career to the next level. I know there have been a lot of big fights, big events between Puerto Rico versus Mexico throughout history—Oscar and (Hall of Fame former three-division champ) Felix ‘Tito’ Trinidad’, for example—but there’s plenty of time in my career for fights like that.

This kid is good. Can't wait!

Tuning in tomorrow. Lets see how good Gamez is