Tyson Fury's trainer, Ben Davison, has fired back at his boxer's father, John Fury, who called for an immediate decision to fire the entire team - after Fury won a twelve round decision over Otto Wallin at T-Mobile Arena in Las Vegas on Saturday night.

In the third round, Fury suffered a severe cut just above his right eye and later suffered another cut on the eyelid. Fury controlled much of the contest, but he was rocked in the twelfth and final round.

John Fury had told BT Sports: "He wouldn’t have even beat Alexander Povetkin on that performance. I'm being honest. He’s my son, but I’m a straight talker; that's the worst I've seen my son. He needs to go back at the drawing board and see what’s gone wrong here.

"That wasn’t Tyson. He was as weak as a kitten from the first round. Even looking at him in the first round, he looked softer than he usually does. If I had my way, the lot [Tyson's team] would be gone. If they keep that team that will be his career [gone]." 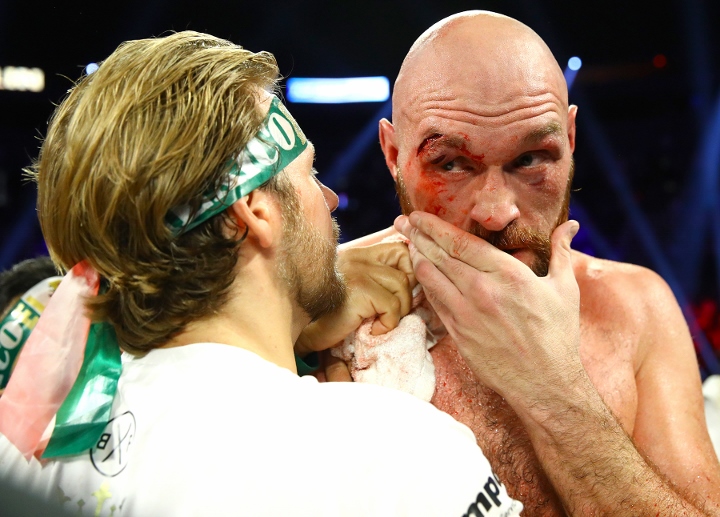 Davison, who has been Tyson Fury's trainer since his decision to begin a comeback in late 2017, disputes the claims being made by John Fury.

But Davison said: “Listen if Tyson was a kitten, he wouldn't have been able to do twelve rounds like that. It was his engine and experience, strength and size which was the difference there. Strength wise I was perfectly happy with it. The cut affected him a lot, he couldn't see out of it but he had to make out like he could see out of it.

“That's why he made it a dog fight. Close the gap so he didn’t have to be able to see the shots coming. He got the job done. John is Tyson's dad so of course you have to respect him but Tyson was fully prepared and you can't do anything about sustaining a bad cut.

“Just because he's gone twelve rounds it doesn't mean he's weak. If he was weak he wouldn't have been able to do twelve rounds there. We worked in training camp for it to potentially be a dogfight because we knew that we might have to go there. Otto had heart and bollocks and tried to close the gap up and luckily we had prepared Tyson in case it went that way because that's what he needed.”

[QUOTE=Deontay Wilder;20061242]Bob Arum has put a stranglehold on Fury's career. Fury's own father has now turned against him and his new team. The British public are pressuring him as he's the last Brit standing at HW. All of this is…

Quote: Originally Posted by PunchyPotorff View Post You can't box, and you have atrocious footwork. Fury has both those traits mastered. He will beat you easier in the rematch. [QUOTE=Curt Henning;20061887]that rematch that wilder wanted immediately and fury is still…

At least he got the job done, that was the most important. He may have benefitted from being the star attraction too as in many other cases the fight would have been called off.

John Fury is just upset that he's not allowed in American and thus isn't involved in Tyson's camp. It's well known that he hates Ben and has done for a while. He's bitter. No trainer can teach Fury anything new,…

[QUOTE=memphis mook;20061529]So I'm the only person that enjoyed Tyson's performance........[/QUOTE] It was a great performance, it takes guts to battle through an injury like that. This just shows why Fury is a phenomenal fighter and the best in the game.…