Tyson Fury has shaken up the heavyweight division again.

The unbeaten British star stunned viritually everyone in boxing with an announcement early Monday morning that he and promoter Frank Warren have signed a multi-fight, co-promotional agreement with Bob Arum’s Top Rank Inc. and ESPN.

BoxingScene.com has been informed by multiple sources that Fury’s partnership with ESPN and Top Rank does not necessarily mean he won’t fight Deontay Wilder in a heavyweight championship rematch May 18 at Barclays Center in Brooklyn. 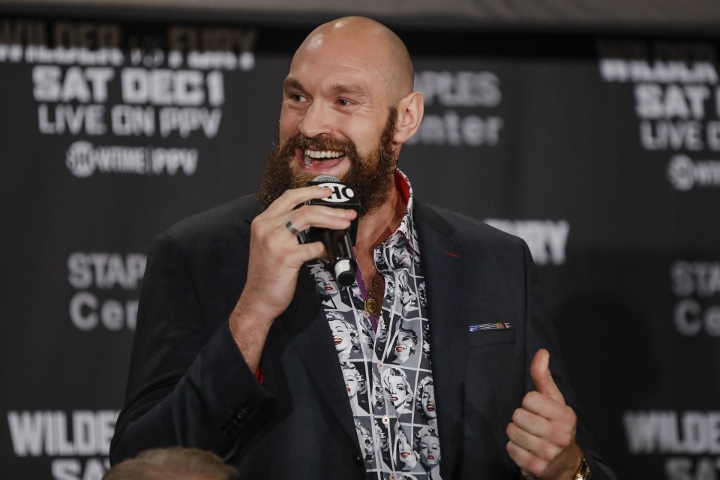 It does complicate matters, however, as Fury and Wilder might be forced to take lower-profile fights as Arum, Al Haymon, ESPN and Showtime figure out how to put together a deal to distribute their pay-per-view rematch.

Negotiations nearly were finalized for Fury (27-0-1, 19 KOs) and Wilder (40-0-1, 39 KOs) to fight again May 18 before ESPN issued a press release early on the morning of a national holiday in the United States to announce Fury’s new deal.

Showtime, which distributed the first pay-per-view bout between Wilder and Fury on December 1, could work in conjunction with ESPN to distribute their rematch. ESPN’s enormous reach both on television and the Internet would help make their immediate rematch even bigger than their 12-round fight 2½ months ago.

Or, unfortunately for boxing fans, Fury’s new deal with ESPN and Top Rank could lead to Wilder and Fury facing different opponents next. Delaying their rematch would further fracture the heavyweight division because it would mean that boxing’s top three heavyweights – Wilder, Fury and Anthony Joshua – won’t fight one another anytime soon.

Top Rank recently signed Bulgaria’s Kubrat Pulev (26-1, 13 KOs), who would be a reasonable opponent for Fury if he doesn’t fight Wilder next. Wilder, meanwhile, could make a mandatory defense against American rival Dominic Breazeale (20-1, 18 KOs) in his next fight if Fury opts to face someone else.

The first bout between Wilder and Fury, which resulted in a dubious draw, produced just over 300,000 pay-per-view buys.

Wilder knocked down Fury in the ninth and 12th rounds of that bout at Staples Center in Los Angeles. Fury got up both times, most notably from a devastating knockdown early in the 12th round, to make it to the final bell.

[CHECK BACK FOR MORE ON THIS DEVELOPING STORY LATER.]

This could be great for Fury and those involved!

[QUOTE=champion4ever;19524526]I couldn't have agreed with you more. That's the reason why he pulled out that Wladimir Klitschko rematch for fear of being figured out. Wilder hit him so hard that he thought he had died. That punch literally put the…

[QUOTE=Redgloveman;19522316]I never understand when people say that Reiss should have waved the fight off when Fury actually made the count. Fury making the count completely and instantly vindicates Reiss's not waving the fight off.... it just seems like wishful thinking…

oh well fights off now, expect tyson to fight 3 bums in a row if arum has his way