Frank Warren: Cotto vs. Kamegai is What Boxing is Really About

Mercifully, within a few days, the trash talking will nearly be done and we will be ready to bid Floyd Mayweather jr a second farewell from the ring.

When Floyd called time on his glorious career nearly two years ago now after defeating Andre Berto, none of us really believed it was the last we’d see of him with the gloves on.

Back then though we certainly didn’t imagine he would see in the half century with a sort of exhibition bout against the top dog in the UFC. 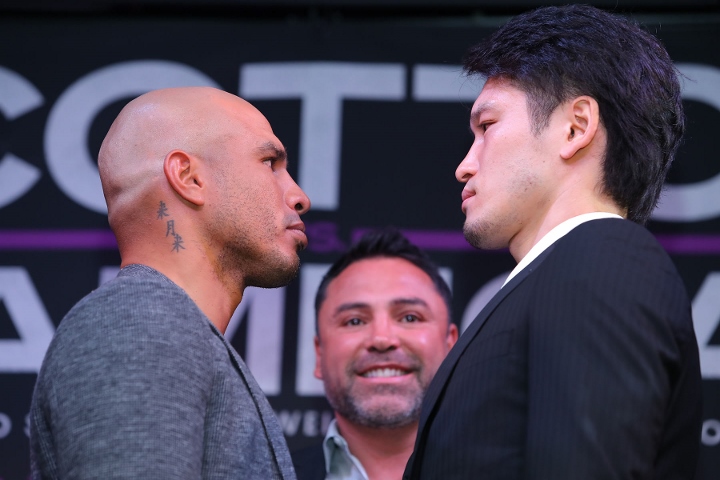 We simply don’t know what punching pedigree Conor McGregor has got, if any, with him never having boxed professionally. All we have been teased with is a few seconds sparring footage against Pauli Malignaggi, who was never much of a puncher himself and he also retired earlier this year after being floored by Sam Eggington.

Malignaggi’s involvement could all be part of the panto, given that he is a commentator for Showtime and occasionally Sky. Read into that what you will, but I take it all with a large pinch of salt.

The fact of the matter is, I don’t see how on earth McGregor can win unless he gets ultra lucky and catches Floyd, who has been in with far bigger punchers than him in the past, not to mention far more skilful boxers.

The only question mark can be whether the Money Man has still got it in him at 40. Is he going to have his Klitschko or Pacquiao moment? I don’t know.

Many people will, however, buy into it and I don’t knock Floyd for doing it. He is, for me, a genius, an absolute genius.

Look at what he has done since looking after himself. He’s picked all his own opponents, made fights at the weights that suit him, he’s made a truck load of money and, more importantly – whether you love him or hate him for his antics – his marbles are all in place.

That is what boxing is all about, the art of hitting and not getting hit. He is the great exponent of it in modern times.

People can say what they want about Neymar and how disgusting it is what he will earn at PSG, but it will take the Brazilian 15 years to earn what these two guys are going to earn in one night.

Mayweather-McGregor is a novelty, a curiosity and a lot of people will stump up the pay-per-view money with the expectation of something untoward occurring.

There is that car crash undercurrent about it, no doubt about that. I understand, however, there is a clause in the contract that if McGregor does employ any MMA manoeuvres he loses 80 or 90 percent of his money, so I’m told.

One thing is almost for certain – and it is unusual for a fight involving Floyd – is that it won’t be one for the purists.

Well, they can tune into BoxNation because on the same night we have got the great Miguel Cotto in yet another world title fight, this time for the vacant WBO super welterweight title against highly competitive Japanese Yoshihiro Kamegai

A staggering 23 out of Cotto’s last 24 fights have had at least one world title at stake. He seems to have been around for donkey’s years and he really is as tough as old boots.

The winner of this fight has to fight the winner of Liam Smith v Liam Williams, so there is a big domestic interest to set that fight up for early next year.

So, besides being a proper fight, as opposed to an event, our guys have got a big interest in it, in the same way Billy Joe Saunders has in the Canelo-Golovkin fight.

At 36, and going for his sixth world title,Cotto’s career is getting close to hearing the final bell so this weekend is one of the last chances to see a great master of the sport at work.

[QUOTE=Shadoww702;17979187]I am! This should be a high volume offensive fight and both can bang pretty good. You DEFINITELY won't be bored watching it. I'm also looking forward to Tureno and Derveychenko's fight. That one should be AWESOME as well...[/QUOTE] Yeah…

wow what low standards people in boxing have. this fight is azz

What boxing is all about? Robberies, cheats, gifts decisions prompted by golden (boy or girl) trinkets. Nah, that's not what boxing is about. Boxing's about authentic challenges frank.

The cotto fight is a joke he's fighting a complete bum that even bum Guerrero beat I bet it has the worst ratings out of any hbo boxing event in history.