The only thing that interests Deontay Wilder’s co-manager, as it pertains to Hearn, is making a Wilder-Anthony Joshua fight. Finkel isn’t nearly as certain Hearn, Joshua’s promoter, wants the same thing.

After reading a story on this website in which Hearn stated that he didn’t get back to Finkel following Finkel’s meeting November 29 with his father, Barry Hearn, because Wilder said he would only accept a 50-50 split to face Joshua, Finkel dismissed Hearn’s version of events as an “excuse” because Wilder didn’t say that until roughly a month after Finkel and Barry Hearn met in New York. Finkel first revealed that he hasn’t heard back from the Hearns since that November 29 meeting during the post-fight press conference following Wilder’s dramatic comeback and 10th-round knockout of Luis Ortiz on March 3 in Brooklyn.

Finkel also clarified that night that it won’t take a 50-50 split to make a Joshua-Wilder fight next (https://www.boxingscene.com/wilders-manager-we-50-50-split-make-joshua-fight--125972). 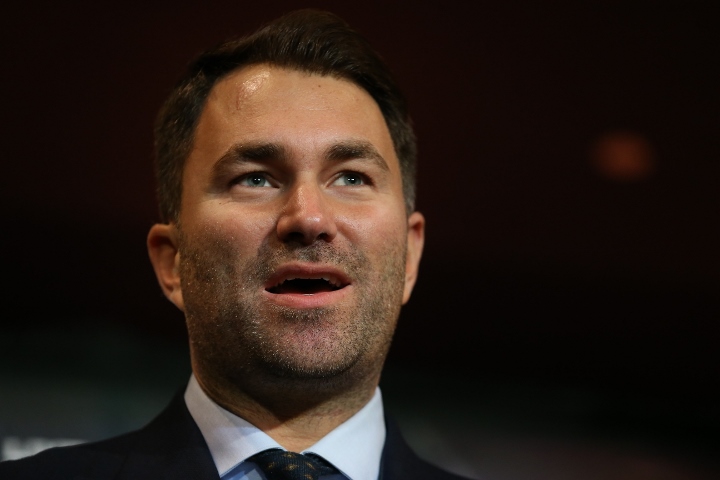 Eddie Hearn called it a “bitch move” for Finkel to discuss that email publicly and repeatedly referred to him as “Shirley Winkel” in that story. Finkel refrained from calling Hearn names, but emphasized he believes Hearn is avoiding the issue that matters most to boxing fans – whether he truly wants to make Joshua-Wilder for later this year.

“In the story [Friday], he said the reason he didn’t call me was Deontay said the fight won’t happen if the fight’s not 50-50,” Finkel told BoxingScene.com. “The problem with that answer is that Deontay didn’t say that until a month after I met with Barry Hearn. So it wasn’t that Deontay said that, and that’s the reason Eddie didn’t call. Now he’s using that as an excuse, but that happened a month later. It didn’t happen before then.

“He also said in the story that I’m old school, like his father. That is a very big compliment, because I’m a very big fan of Barry’s. And if I’m old school like him, I’m very proud of it. And for someone who’s so old school, when I was negotiating with [Eddie Hearn] for the Klitschko fight, it was OK because every time we got off the phone he called his father about what to do. Barry is a class act. Barry is someone I know for 30, 40 years.”

Finkel, who was part of the retired Wladimir Klitschko’s managerial team, was instrumental in making the Joshua-Klitshko fight that drew a record crowd of roughly 90,000 to London’s Wembley Stadium on April 29. Eddie Hearn also stated in the aforementioned article that he’ll go around Finkel – who manages Wilder along with Jay Deas, also Wilder’s co-trainer – to negotiate for Joshua-Wilder when the time is right.

Finkel emphasized that won’t be possible. The veteran manager also stressed the danger in continuing to wait to make this huge heavyweight bout between Joshua (20-0, 20 KOs) and Wilder (40-0, 39 KOs), which would earn eight-figure purses for both boxers.

“If they want the fight, we’ll make it,” Finkel said. “It’s not about someone being afraid or this and that. They’re doing what they think is good for business. Because otherwise, Eddie wouldn’t say, ‘Maybe we’ll fight Jarrell Miller [in August] and then we’ll fight [Wilder].’ The fight isn’t gonna be bigger. The fight is enormous right now. There has been a lot of great coverage of it. And God forbid something had happened [in Wilder-Ortiz] that went the wrong way, or something happens to either guy by taking more fights. Then you’re missing a great opportunity to unify the heavyweight championship. It’s simple."

[QUOTE=pollywog;18566450]Methinks you're lying about everything except for wanting a dude to blow you... Nah bro, honestly I'm flattered but I'm a strict Vagitarian![/QUOTE] I'm not lying! But I think you are.... 🤔🤔 Why would you even bother replying to my…

[QUOTE=BigStomps;18566050]Well first of all I'm not exaggerating. Second of all if your jealous and feeling left out then you can come suck on it too if you'd like. Just saying....[/QUOTE] Methinks you're lying about everything except for wanting a dude…

get this done behind closed doors, how much more can be said in public?

[QUOTE=Kali_KO;18565701]Joshua at the point of this career that he can sell out stadiums regardless of who he fights. Wilder fought his first live opponent, still was over 40, and needed the red to save him with extra 15 sec to…