Twelve thousand Mexican fight fans got to witness ‘El Animal’ in action as the highly ranked Croatian sensation took just three rounds to dismantle the experienced Heredia, with a thudding right hand knocking Heredia onto the canvas before the referee waved off proceedings.

“The crowd was absolutely fantastic, it was an honour to fight for the Mexican fans tonight,” said the undefeated Hrgovic. “Step by step I’m climbing to the top. I was asked what I think about fighting on the Anthony Joshua card in Saudi Arabia. I’m grateful for the opportunities and I’ll fight anyone. I’m expecting a big name so I can show the world who I am.” 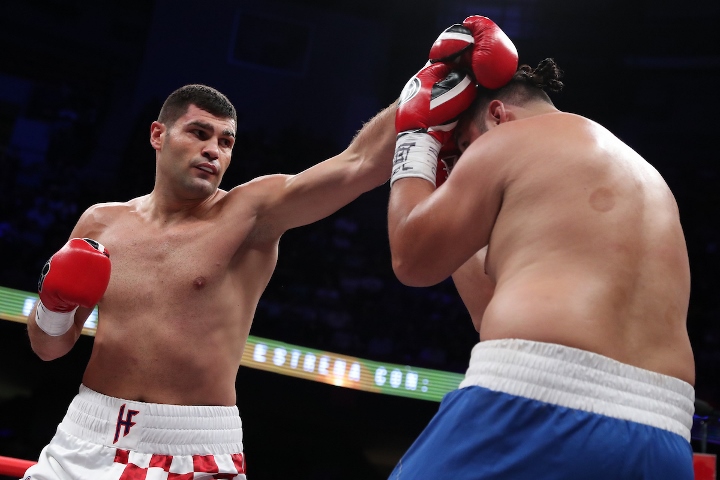 “Filip Hrgovic is the most exciting heavyweight of the new-era,” said Sauerland. “It won’t be long before he gets his opportunity to put his name in the history books."

“Filip has taken another stop on his road to success and people are now sitting up and taking notice,” said Sauerland. “Filip is the future of the heavyweight division, and it’s just a matter of time until he gets his shot.”

Hrgovic already beat this low class gatekeeper Kevin Johnson, he should fight somebody like Price, Duhaupas, Rudenko now. helenius is also ok, but Helenius is coming from a KO loss, I doubt he would fight Hrgovic.

Helenius would be ok at this stage for him

Get real, Hrgovic needs at least one 12 rounder with a living body first, to get bigger fight. He was in 12-rounder, but he finished Mansour inside 3 rounds. Yes, Kovalev - Yarde is the best example, why guys with…

[QUOTE=mlac;20013141]well, i bet heavily on kovalev to win, kovalev to win by KO, and the under 9.5 rounds, which missed by a round. and apparantly im stupid! according to the guy who predicted Yarde would win. gets knocked out by…